'Countess Kate' - a Novel by Charlotte Yonge Content from the guide to life, the universe and everything 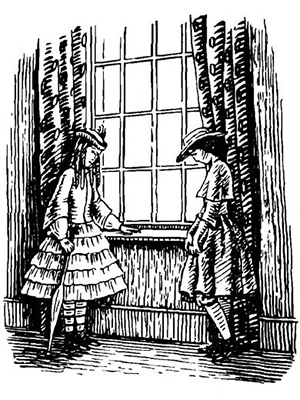 Countess Kate is a novel by Charlotte Yonge (1823-1901) that was published in 1861. It tells the story of Katherine Umfraville, the countess of the title, and how she starts learning to live up to the status that has been bestowed upon her. At the same time, Kate must work to become humble and devout.

There are numerous characters in the novel, from several different but intertwined families.

Katharine Umfraville, known as Kate, is a tall, thin 11-year-old girl when the story begins. An orphan from an early age, she has lived with the Wardour family for as long as she can remember. After the accidental death of her cousin, Lord Caergwent, Kate inherits the title of countess and becomes Lady Caergwent.

Sylvia Wardour is like a sister to Kate. She is the same age, but is considered to be prettier than Kate, having pale skin, rosy cheeks and 'well-cushioned limbs'. Her mother, the sister of Kate's mother, died four years before the story begins. Her father is a clergyman. She has an older sister, Mary, a younger sister Lily and brothers Armyn and Charlie.

Barbara Umfraville is Kate's father's sister. She is a strong woman who is keen to do her duty but discovers she is not sure how to handle a young girl. Her sister Jane is unwell, so has a wheeled-chair to go out in, and often has attacks of some sort that are brought on by excitement.

Giles Umfraville is Kate's paternal uncle. He and his wife Emily have lived in India for some years. Their daughters had died there, then their younger son was killed in the Indian Mutiny and their eldest child Giles was fatally wounded. After such tragedy, they return to London to see what has become of the rest of their family.

Lord de la Poer is a friend of Kate's father and uncle. He and his wife Lady de la Poer have several children including Ernest, who is the same age as Kate, and Adelaide.

Sylvia Joanna Wardour and her sister Alice are cousins of the other Sylvia. Alice uses a wheeled-chair. They live in London but Kate meets them in Bournemouth where Alice is taking the sea air.

The novel begins just after Kate has inherited the title of Countess. Although she has been living happily with her mother's family for almost all of her life, it is decided that it would be better for her new status if she were to move to London to live with her paternal aunts.

A governess1 is engaged by Aunt Barbara to try to teach Kate ladylike ways (such as how to descend a staircase without touching the bannister) but the efforts are a struggle for both of them. As a result, Kate becomes tired and listless and feels dizzy so is prescribed exercise as a way to disperse her frustrations.

Kate meets the de la Poer family and is impressed by how decorous and welcoming they are. Adelaide and Kate enjoy fun activities such as decorating cards, during which Kate makes a mess and ends up with paint on her face like a moustache and stubble. The family take Kate on an excursion but there is a storm and Kate falls into a pond in shock. After having been put to bed, she makes a full recovery, but Aunt Barbara is not impressed when Kate returns home as she doesn't believe Lady de la Poer's praise of the girl's talents.

That summer, Kate is not allowed to go to the Wardours' house as Aunt Barbara considers them a bad influence. Nor is Kate to spend time with the de la Poers because of Aunt Barbara's belief that they wouldn't be able to cope with Kate if they knew what she was really like. However, Kate does enjoy a holiday in Bournemouth with her aunts as the sea air does her good:

She gazed at the grey outline of the Isle of Wight opposite, feeling as if there was something very great in really seeing an island.

Kate is not allowed to speak to other children on the beach, but she is permitted to spend time with cousins of the Wardours. She gets on well with Alice, who also likes reading - Alice brightens up whenever Kate talks to her and draws picture stories for her. Kate gets on less well with Sylvia Joanna, who is quite different from the other Sylvia, but over time they become friends as they need the company. Sylvia likes playing ball games, whereas Kate is not good at them, while Kate likes imagination games such as play-acting 'The Lady of the Lake', whereas Sylvia doesn't understand them. Sylvia is also more tactile than Kate is comfortable with, and even Sylvia's mother disapproves of her hugging and kissing Kate in public.

On her return to London, Kate starts writing a fable about how the protagonist's life would be happier if she were not a countess, as she is struggling again. The governess resigned, so Kate is left with Josephine, her lady's maid, and Aunt Barbara as her teacher. After Josephine is dismissed for meeting a man during work time, and Kate is forbidden to go to Sylvia Joanna's birthday party at London Zoo, Kate decides to go back to the Wardours' home.

Scared though she is, she takes the train to Oldburgh (with a first class ticket, of course) where she meets Charlie. He walks her home and Sylvia welcomes her warmly. Mr Wardour is pleased to see her, but also recognises that she shouldn't have run away, so sends a telegram to her aunts. However, there is no way she can return to London that day, so she stays the night with the Wardours.

All the excitement made Kate ill, so she is allowed to sleep in until noon, missing the morning church service. However, in the afternoon she reads psalms and lessons of her own accord and goes to the evening service. She fears the sermon will be about how to submit to authority, but instead Mr Wardour talks on 'Peace, be still' and of soothing torment, to help her to use Christianity to avoid becoming as dangerously frustrated as she had in the past. Kate cries real tears as she enjoys the service fully for the first time. Kate and Sylvia promise to say prayers for each other when they are not together, but agree not to ask too much lest they be like Balaam, for whom events came about 'in some terrible way'.

Kate returns to her aunts once she is well again, but as Aunt Jane had been made ill by the excitement, Aunt Barbara ensures Kate is never left alone so she has no chance to cause any trouble. Kate meets Uncle Giles, who confesses he has also found Barbara to be formidable, so they get on well. Aunt Barbara fears he won't be able to cope with Kate because of what the girl is like, but admits with tears that she herself is not able to love Kate.

At last Kate finds a home with her uncle and aunt in Caergwent Castle where she can 'learn the duties of her station' while also being allowed to spend time with Sylvia and her other friends and family.

In the introduction to Georgina Battiscombe's biography of Charlotte Yonge2, EM Delafield claimed that, because Charlotte possessed 'cast iron sincerity that is utterly destructive of the more subtle forms of vanity', she never included autobiographical elements3 in her novels, with the exception of Abbey Church4 from 1844 and Countess Kate.

In Countess Kate we see that Kate, like Charlotte, is a child who is keen to learn, but physically clumsy5. She struggles with night terrors. Painfully shy at times, she often erupts into loudness as compensation, much to some adults' dismay. She has read her brother's books, so knows some classical history, and also collects natural objects. She likes running and jumping, and is fond of spending time with her cousins, especially as she has been forbidden to play with the children in Berkeley Square. She also enjoys writing stories and illustrating them. The formidable aunt looms large, and in particular there is concern about whether an aunt who has lost a child would be able to cope with a boisterous girl in her house (Charlotte was forbidden from seeing her Aunt Margaret, but Kate's Aunt Emily's nature was improved by the child's presence).

Initially Kate's faults seem to give the author excuses to make moral pronouncements about how children ought to behave (such as calling her a 'silly little girl' for being afraid at night). However, by the end of the book she has more sympathy for the child who has had such a disrupted childhood - although Kate is not immediately able to cease doing things that other people disapprove of, 'Uncle Giles never failed to make her truly sorry for her naughtiness, and increasingly earnest in the struggle to leave it off'. Kate would go on to appear in Charlotte's 1873 novel The Pillars of the House.

1Mrs Lacy, who had recently lost her husband so needed to earn money to support her children. 'The eyes looked soft and gentle, but as if they had wept till they could weep no longer.'2Charlotte Mary Yonge, Constable and Company Ltd, 1943.3It can be argued about whether autobiographical elements in a novel are vanity, or simply a good way of introducing depth of character to the people in the novel.4Charlotte's first published novel centred on Elizabeth Woodbourne who delights in making historical allusions in everyday conversation just as Charlotte did at that age.5'Her meals left reminiscences on all her newest dresses.'