'The City Without Jews': Hugo Bettauer's Chilling 1922 Comedy Content from the guide to life, the universe and everything 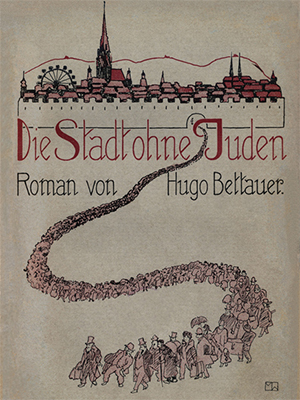 All these people didn't fall from the sky as Nazis. They had to become Nazis.
- Henk Handloegten, writer/director, Babylon Berlin

History: it's hard to understand, and it usually makes our heads hurt. How did the Roaring Twenties turn into the Fascist Forties, and what happened in between? Getting back into the mindset of the past is a struggle. It doesn't help that they recycled all the film stock.

Hugo Bettauer was an investigative reporter, a novelist, and a stirrer-up of controversies. As a young man, he'd taken a couple of steps to distance himself from being Jewish in order to get ahead (and be allowed to join the Austrian army): he converted to Protestantism, and changed the spelling of his name from Betthauer to Bettauer. That probably didn't fool too many people in Austria.

Bettauer inherited a fortune, then lost it by making bad investments. He and his first wife lived in New York City for a time, and Bettauer became a US citizen. He also began a career as a journalist and novelist. After living and working in Berlin, Hamburg, and the US again, with his second wife, he returned to Vienna, where he worked for the Neue Freie Presse   – until the typewriter incident, that is. It seems Bettauer had a pretty high opinion of himself. When the company sent him a reconditioned typewriter for use as a war correspondent, he trashed it. They fired him.

Bettauer was controversial – and extremely successful. His novels, mostly detective stories 'ripped from the headlines', sold like hotcakes, and he wrote about five a year. Films of his work made stars: Greta Garbo had her international debut in GW Pabst's film of Bettauer's Die freudlose Gasse (The Joyless Street).

However, it was City Without Jews that was arguably his downfall.

In 1922, Bettauer published Die Stadt ohne Juden: Ein Roman von Übermorgen, translation: The City Without Jews: A Novel of the Day After Tomorrow. The novella is a social satire set in Vienna. The plot: unhappy with social change and economic problems after the First World War, and envious of the prosperity of Jewish bankers, professionals, and merchants, Austria's parliament votes to expel all Jews from the country. The expulsion takes place peacefully. At first, the Austrians rejoice: with the 'one-percenters' gone, there are more luxury apartments available for the 'Christians', and the 'dyed-in-the-wool' Austrians take over the abandoned businesses.

However, the loss of Jewish leadership and capital causes disaster. In spite of aid from a certain Mr Huxtable, the leading anti-Semite in America, the Austrian Krone loses value. Foreign countries boycott Austrian businesses. Deprived of the international impetus that drove Vienna's luxury economy, the country becomes not only poor, but hopelessly provincial. Instead of selling Paris fashions, the department stores' stock is reduced to Loden coats and Tyrolean hats. Beer cellars replace coffeehouses. Nobody is making money; everyone is miserable. Eventually, the desperate Austrians invite the Jews to return – which they do. All is forgiven.

The other plot of the novel is the Romeo-and-Juliet story of two lovers, Leo and Lotte. Artist Leo is expelled for being Jewish. He returns secretly from Paris, having grown a French (pointed) beard and improbable moustache as disguise. As 'Henri Dufresne', Leo engineers the return of the Jews by influencing public opinion with letters to the editor and broadsheets which he prints in his apartment. In the hilarious denouement, Leo prevents the right-wing political leader from casting the deciding vote against the Jews by delivering the thoroughly-intoxicated demagogue to the gates of a mental hospital.

Encountering City of the Jews today is an exercise in surrealism. It is impossible for a modern reader to forget the horror to come. What made people laugh indulgently in 1922 makes us shudder today. Austrian citizens greeting each other with 'Heil!'? Government laws talking about 'Aryans' and 'mixed marriages'? We can't find this funny. The novel shows us two things: antisemitism and völkisch attitudes were alive and well in Vienna in the early 1920s, but few had the imagination to see where these attitudes might lead. Even Hugo Bettauer considered antisemitism a subject for comedy.

City Without Jews: The Movie

In 1924, German Expressionist director Hans Karl Breslauer (not Jewish) filmed Die Stadt ohne Juden. It is a comedy. The biggest star, the one with the 'and starring' billing, is Hans Moser, a beloved comedian. Moser usually played good-hearted, bumbling figures. Here, he plays the head of the right-wing party – the one who ends up in the insane asylum. To massive comic effect, Rat Bernart, in what may be the grip of delirium tremens (he's quite a heavy drinker), hallucinates Stars of David everywhere and rants that everyone around him is a Jew bent on his destruction. This is played for laughs, followed by the joyous reunion of the ingenue, Lotte, with her beau Leo.

The film follows Bettauer's novel pretty closely, and the title cards – it is a silent film – often quote the text directly. The director made two major changes, however: instead of Vienna, the story takes place in 'Utopia'. This makes next to no difference, as the film makes free use of Austrian dialect, and it's perfectly obvious that the action takes place in Vienna. The second change is the ending: Rat Bernart wakes up in the pub: it was all a bad dream caused by his drunkenness. Would that the madness of the 20th Century could be explained away so simply.

The film did relatively well in cinemas, although the author and the director fell out over creative differences. These were mostly due to the film's production values, which were low even by 1924 standards. Attendance was good, even internationally. In Austria, National Socialists sometimes threw stink bombs into the cinema. In Linz, hometown of rising politician Adolf Hitler, the film was banned.

The City Without Jews story ended tragically for Hugo Bettauer. In 1925, the muck-raking journalist was already the subject of intense criticism in the press for his engagement in controversial issues such as abortion and LGBT rights. Taking on the emerging Nazis sealed his fate. On 10 March, 1925, a 21-year-old Nazi Party member named Otto Rothstock entered Bettauer's office and shot him multiple times at point blank range. At the trial, Rothstock's attorney, also a party member, entered an insanity plea. The jury remanded the killer to a mental hospital, where he was later discharged as 'cured'.

Want to see the film? Amazingly, a copy has been discovered by researchers and restored. It's available for viewing on Youtube.