'LazyTown' - the Television Series Content from the guide to life, the universe and everything 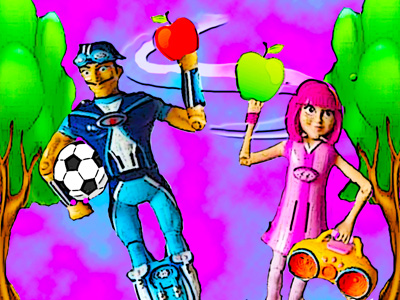 LazyTown is perhaps the most popular Icelandic television show ever, featuring an Icelandic, British and American cast. First broadcast in August 2004 on the Nick Jnr and Nickelodeon channels, this children's TV programme mixes actors and puppets to tell about the people of a small town whose inactive ways are challenged by visitor Stephanie and a superhero named Sportacus, much to the annoyance of Robbie Rotten the bad guy. It has had incredible international success and has been broadcast in 180 countries worldwide.

The series was created by Magnús Scheving, a gymnastics instructor, and is based on his book Áfram Latibær! ('Go LazyTown', 1991). It was produced by his studio, LazyTown Entertainment. 52×25 minute episodes were originally made in 2004-7, with a further 26 episodes made when the series briefly returned during 2013-14. The show features a unique blend of live-action, CGI and puppetry, and promotes healthy eating, sport and especially dancing: every episode features at least two songs, the final one being the 'Bing Bang' song.

The series follows the adventures of the inhabitants of a place called LazyTown. The protagonist is a young, pink-haired girl dressed entirely in pink called Stephanie, originally played by Julianna Rose Mauriello. The first episode sees Stephanie moving into LazyTown to stay with her uncle, the mayor of LazyTown. In LazyTown children spend all their time eating sweets and playing computer games, much to the disappointment of Stephanie who wants someone to play with. In the revived series, Stephanie carries a pink mask in her pink bag, allowing her to become a superhero and save the day in her own right. She is quite possibly the pinkest character to appear on television since the Pink Panther.

Robbie Rotten, played by Stefán Karl Steffánson, is an evil genius who lives in an underground lair. His goal is to make sure that everyone in LazyTown stays lazy. He discourages healthy eating and sport and will go to amazing lengths to try to get rid of Sportacus. Rotten is also a master of disguise, being able to dress as anything from his extensive wardrobe. Amazingly, no matter how bad the disguise is, no-one ever recognises him.

At the opposite end of the spectrum is resident superhero Sportacus, played by Magnús Scheving himself. Sportacus's mission is the reverse of Robbie Rotten's. He promotes sports and healthy eating. He travels around LazyTown in a large blue airship that is filled with fruit, or 'Sports Candy' as he refers to it, and sports equipment. When he takes a bite from an apple he receives amazing strength. Conversely, if Sportacus ever consumes processed sugar such as sweets, he becomes weak and loses all his power, and is only able to recover if he is given fruit. This leads Robbie Rotten to regularly disguise sweets as fruit.

Besides his airship, Sportacus' most prized possession is the crystal that is located in a little clasp bearing the number 10 on his chest. This crystal causes the clasp to glow and bleep whenever someone is in trouble. As expected, when anyone steals it things go terribly wrong with more and more kittens trapped up trees unable to gain Sportacus's attention.

Puppets play all the remaining characters. Ziggy (Guðmundur Þór Kárason) is a young candy lover who is always seen eating sweets, particularly a giant lollipop, but dreams of being a superhero. Pixel (Ronald Binion) is a computer whizz kid, able to hack anything despite only being 10 years old. Stingy (Jodi Eichelberger) is the rich but selfish one who often gets into trouble due to his self-centred and greedy personality. Trixie (Aymee Garcia & Sarah Burgess) is the naughty one who always plays practical jokes on the others and is often impatient. Another character is Mayor Milford Meanswell (David Matthew Feldman), Stephanie's uncle, who in later episodes is married to local gossip Bessie Busybody (Julie Westwood).

A minor character is the small black and white kitten. This poor creature always ends up being stuck in a tree and it is up to Sportacus to save it. The kitten's origins and owner are unknown and it appears not to have aged at all throughout the duration of the series. Another observation that can be made from these scenes is that LazyTown only has one tree. Whenever a character (be it the kitten, a puppet or one of the actors, typically Robbie Rotten) gets stuck up a tree, it always happens to be the same one.

Each episode is filmed in front of a giant green screen, with the computer generated town added in after. As you can probably guess, the aim of the series was to promote a healthy lifestyle among young kids.

As a successful television series, LazyTown inspired a range of merchandise and also inspired a stage show that toured Britain.

Two of the best-known LazyTown songs are 'The Cake Song' and 'The Pirate Song'. The most famous song is 'Bing Bang (Time to Dance)' which reached number four in the UK charts in December 2006 - well, it was nearly Christmas.

In 2008 a spin-off show, LazyTown Extra, was made for Britain's CBeebies channel. These ten-minute episodes showed Ziggy meeting children doing a variety of different sports in the UK, and some other short sketches.

In 2012 the characters appeared in the CBeebies channel's first stage show since 2008. In CBeebies Live: Reach to the Stars, Robbie Rotten tries to kidnap the CBeebies presenters and other popular characters such as the ZingZillas, Mike the Knight, Postman Pat and Squiglet, in order to become the biggest star on CBeebies.

In 2011 Turner Broadcasting, part of the Warner group, bought LazyTown Entertainment and in 2012 began making new LazyTown episodes. Chloe Lang replaced Julianna Rose Mauriello as Stephanie as it was felt that Julianna was now too old to play the character. Many of the voice actors playing the puppets also changed, so the new series cast had predominantly American accents. When it returned to British television it was broadcast on Milkshake, Channel Five's children's programming.