Mastering Villainy in Seven Easy Lessons Content from the guide to life, the universe and everything 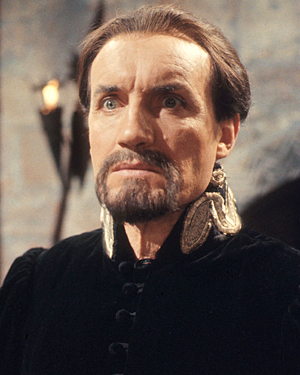 When we hear the word 'villain' we often think of a fictional bad guy such as Darth Vader, Voldemort, or Sauron. While fictional scoundrels may seem plentiful, real-life villains are even more pervasive. During peace and in times of war, regardless of economic ups and downs, these evil-doers are with us throughout history, up to the present day and into the foreseeable future.

As a child you may have heard that 'crime doesn't pay', but a cursory glance at the news says otherwise. Some forms of evil-doing, such as 'war profiteering' and 'market manipulation' are quite lucrative, rarely punished, and surprisingly well-respected.

This entry should prove valuable when preparing for a villainous vocation or even creating a fictional villain or villainess.

Lesson One: Finding Motivation For Your Villainy

Everyone could use a little motivation; find yours among the Seven Cardinal Sins. Four of these - pride, wrath, greed, and envy - inspire most villains.

Pride, also called hubris or vanity, is an excessive belief in one's own abilities. Pride can motivate an average scum-bag to truly villainous acts. Anyone can hold up a convenience store; only the truly prideful would undertake masterminding the perfect heist. You are above the law; the petty rules of man do not apply to one as truly great as you.

Wrath, commonly known as anger, can range from feelings of annoyance to acts of hostility. If you enjoy lashing out at others, then let Wrath fester within. Soon your villainy will manifest as violent acts ranging from frat boy1 hazing to all out war. The words 'they deserve it' should soothe any undesirable feelings of compassion for your victims.

Greed, also called avarice or covetousness, is the desire for material wealth or gain. If you long to control all the world's money, oil, or air2, your motivating sin may well be greed. Nurture your feelings of self-entitlement.

Closely related to greed is envy, the desire to have that which belongs to someone else. Do you long for another's abilities or traits? Do you wish the hero's position in life were your own? Let envy propel you to super-villain status.

The sins of gluttony, lust, and sloth are harder to nurture into a primary motivation, but they certainly add a bit of depth to an otherwise two-dimensional character.

Gluttony is an inordinate desire to consume more than one requires. Perhaps your villainy can include dining on endangered species, or even your fellow human beings. You can also be a voracious consumer in the more modern sense of the word. Start by purchasing more shoes and consumer electronics than you need, and then move straight on to wasting resources upon which others depend.

Lust is an inordinate craving for the pleasures of the body. Perhaps you can combine covetousness with lust and seduce the hero's spouse. Indulge yourself.

Most criminal masterminds work very hard to mature their dastardly plans, thus sloth may be a difficult sin to embrace3. You might consider forcing others to labour on your behalf. Perhaps you could take a little nap before warning others about the bomb you planted.

A distinctive cackle, a demented snicker or even a curled lip can speak volumes of your reprehensible behavior. Evil laughs and sneers are not for all villains; perfectly mannered wrongdoers cause much suffering. If you plan to commit your villainy in public office or the boardroom, you may wish to skip this section.

Many classic villainous laughs, including 'Bwa-Ha-Ha-Ha-Ha' and 'Mwa-Ha-Ha-Ha-Ha', have been overused. Unless you wish to create a comic effect, you should develop your own evil laugh.

Practice your evil laugh daily, until you feel comfortable. Now try it out in public. You'll know you have a winner when everyone within earshot looks frightened.

Developing an appropriate sneer is a bit more difficult. You want to seem menacing, not dyspeptic. For this reason, practice communicating scorn with your eyebrows alone. Once your eyebrows can convey derision, any smile will become a sneer.

Nowhere is fashion more important than in villainy. Your clothing should be comfortable when you wallow in sin, flexible while you engage in skullduggery, and stylish as you escape justice.

In general, villains dress just a bit better than anyone else in their professional and social circles. Invest in tailored clothing rather than buying off the rack; a good tailor can hide unsightly weapon bulges.

Accessorising can be tricky, especially considering the trend toward exotic weaponry. Yesteryear's holster may be inadequate for today's laser cannon with optional power packs. Miniaturisation brings new risks; no bad guy wants to reach for a mini-disruptor only to pull out a mobile phone. For this reason, practice on the weapons range before staging a public appearance.

Threats, especially against helpless bystanders, are one of your greatest weapons against the hero. While the hero rescues innocent people from certain doom, his attention is temporarily diverted from defeating you.

You must be prepared to carry out your threats; otherwise, the hero may call your bluff. If that happens, you may find yourself demoted from villain to henchman, or worse, minion.

Should you toy with your hero by dropping cryptic hints, remember to match the puzzle's difficulty to the hero's level of intelligence.

At times you may find your heroes or victims don't fully appreciate the effort that went into your dastardly plan. You may even find yourself explaining your machinations at length while slowly lowering the hero into a tank of sharks. While such an exposé may provide you with momentary satisfaction, it may also lead to your undoing. If the hero escapes, he may foil your plan with the details you yourself provided.

Instead of delivering a monologue, consider perfecting the insult. Your scathing comment should be dripping with sarcasm and disdain. Learn the art of the well-delivered put down from a master, such as British actor Alan Rickman. Whether portraying the Sheriff of Nottingham in Robin Hood: Prince of Thieves, Elliot Marston in Quigley Down Under, or Professor Snape in the Harry Potter film series, Alan Rickman steals scene after scene with his withering remarks.

As a villain, you will confront both heroes and antiheroes.

The hero, or heroine as the case may be, is your opposite; kind where you are cruel, generous where you are stingy, principled where you are corrupt. You can cause your hero to falter if you can manipulate him into deserting his principles in an effort to defeat you.

In contrast, an antihero may have more character flaws than you do. It's pointless to lure him into engaging in deplorable behavior; he'll likely jump in with both feet and enjoy himself immensely. Instead, exaggerate the differences between the two of you. If he is slovenly, crude or drunk, be dapper, polite and sober. You may, at least temporarily, be able to drive a wedge between the hero and those he is labouring to save, that is, your intended victims.

If finding good help is difficult, finding evil help is nigh on impossible. Your minions are likely to be the worst sort of unprincipled hoodlums. Even if you can find dependable, responsible employees, today's loyal henchman may become tomorrow's backstabbing usurper.

Sometimes you can keep your crew in line with promises of filthy lucre or threats of disembowelment; however, you may be better served by hiring good people.

How, you may ask, can I get good people to execute an evil plan? This is easier than it sounds; good people often do terrible things in the name of various abstract concepts, such as duty, honor, and patriotism. A virtuous employee will commit a myriad of vices when a steady pay cheque and decent benefits are on the line. You may be pleasantly surprised at the lengths law-abiding citizens will go to secure medical and dental benefits for their loved ones.

Without an evil plan, you may yet do some harm to those who cannot avoid you; with one, you can visit the wickedness festering in your hard heart upon countless innocent people, far and wide.

Your plan should be closely related to the primary motivation you selected in Lesson One, with extra points awarded for incorporating any secondary motivations. The greedy or envious should plan to take; the wrathful, to damage or destroy.

When devising your plan, remember that simpler ones have less to go wrong. Try to avoid including numerous interdependent steps; Murphy's Law applies to good and evil plans alike.

Some evil plans depend upon timely technological breakthroughs. Such developments can be expensive. If you must advance science to build your Doomsday machine, try to secure a government grant or other source of outside funding.

Your plan must withstand the opposition of heroes, the incompetence of lackeys, unforeseen circumstances, and just plain rotten luck. Expect a few setbacks when putting your dastardly scheme into action, and include escape routes.

Why Villainy? and Other Existential Questions

Why pursue a life of villainy? You may labour long and hard at thankless tasks, suffer legal repercussions, or meet an untimely end at the hands of a vigilante. On the upside, you may gain wealth, power, infamy, and respect, or at least, fear. Ultimately only you can decide whether Evil works for you.

If in a moment of doubt, you wonder why there is evil at all, you are in good company. Philosophers and theologians, when debating the nature of Free Will and Determinism, seem to argue that Evil exists to give the virtuous something against which to struggle. Perhaps A. Swinburne Slocum, played by Fred "Too Slim" LaBour, explained it best in Douglas B. Green's song Someone's Got To Do It.

I love forgery, extortion, and changing cattle brands
But mostly I'm in love with making big and evil plans.
Because the plot demands an evil man
To prove the good are good
Someone's got to put them through it
Even Shakespeare in his glory
Put good villains in his stories.
It's a dirty job, but someone's got to do it.

1A member of a fraternity in a college or university.2As in the plot of Spaceballs  – The Film.3An unlikely champion of sloth is comic villain Robbie Rotten of the children's television show Lazytown, which ran from 2004-2007. Ironically, Robbie Rotten exerts himself to restore laziness to Lazytown, while the heroic Sporticus entices children into healthy activity and proper eating habits.