The Potato Dumpling War of 1967 Content from the guide to life, the universe and everything 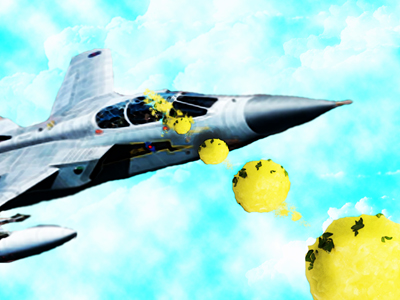 1967: The Cold War was still on. So was the Vietnam War. NATO was protecting Europe from possible Soviet incursion. Lots of planes were flying over Germany: US, British, Canadian, and German planes. Noisy planes. Starfighters: fighter jets that shattered the sound barrier with a loud crack. Sonic booms would startle you, rattle your crockery, cause your cake to fall in the oven, and make the dachshund hide under the bed. A lot of Germans didn't like all this noise.

One brave Münchner did something about it. His name was Helmut Winter, and he became the decorated hero of the Great Dumpling War: the one in which a commercial artist singlehandedly defeated the combined NATO air forces. Let us honour him by learning his story and boiling up some celebratory Knödel: the Helmut Winter weapon of choice.

An Idea is Born

Helmut Winter worked from his home office in Pasing, a section of Munich. Unfortunately, this part of town was directly under the flight path of supersonic jets – almost 100 of the ear-splitting things a day flew over the houses. They flew so low over the house in the Falkweg that the Winters could see the pilots' faces, or so Frau Winter claimed. One day, they'd had enough.

Herr Winter was just putting the finishing touches on a drawing when a particularly loud crack! made him jump – and ruined hours of work. Furious, Herr Winter decided to take action. He phoned the local newspaper and placed an advert:

Winter later claimed he wasn't completely serious – he was just angry. But so, apparently, were a lot of others, and some of them were packing serious heat. In the next few weeks, Winter received offers of:

Soon, there were mysterious men in trenchcoats hanging around the Winters' front door. They probably wanted to know exactly how much ordnance the people of Munich had stashed away from the last war. When Spiegel, a national magazine, ran the advert in their oddities column, the mailbox got fuller, and Helmut Winter got worried. A veteran of the Russia campaign, he had unpleasant memories and no intention of opening a new front. He looked for an honourable way out of the situation. He decided to attack NATO in a less 20th-Century way.

He needed a cabinetmaker and a good cook.

What Helmut Winter gave the cabinetmaker was the design for a catapult: an ancient siege weapon capable of hurling stones at a target – a knight in armour, say, or a castle wall... or a Starfighter. Instead of stones, Winter decided to use...

Potato dumplings, a staple food in Bavaria. The Bavarian word is Knödel3. So this became the Knödelkrieg, and Helmut Winter became the Knödelschütz, famed in newspaper, newsreel and song (yes, there was a record). Although Winter, of course, was the front warrior in this action, hurling his Knödel an astounding 60 meters in the direction of passing NATO planes (and allegedly actually hitting one low-flying helicopter), mention must be made of the home front. Elisabeth Winter made up the R&D department as well as the entire production staff, manufacturing perfect Knödel4 that wouldn't fall apart in flight. Upon determining that the next batch had been perfectly boiled, Frau Winter announced from the stove, 'Die Munition ist fertig!'   – 'The ammunition is ready!'

Everybody had a good time. Newspapers as far away as the St Louis Post-Dispatch reported on the good-humoured 'war' with the air forces. People in Europe were probably taken aback by the chutzpah of it all. North Americans were more likely to be astounded at a German with such a lively sense of humour. Germans appreciated someone who took on 'the system' and won.

'But what good came of it at last?'
Quoth little Peterkin.
- Robert Southey, The Battle of Blenheim

NATO surrendered: the flight path was altered. People in Munich got more sleep.

Helmut Winter was a hero to all the right people – to wit, people with a sense of humour. He became the first recipient of the Karl-Valentin-Preis for using humour to solve a public policy problem. Karl Valentin was a famous Munich comic.

Helmut Winter died in 2013. In 2015, his widow Elizabeth bestowed the first prizes given in her husband's memory, the Knödelorden, or Order of the Knödel, to a mural artist, some schoolchildren who had built their own catapult5, and the Pasinger Archiv, which preserves the history of this Munich district.

Do you own a large catapult? Would you like to make some potato-y ammunition to go into it? Alternatively, are you planning a dinner with Sauerbraten and red cabbage and need a tasty carb? Then you need to know how to make Kartoffelknödel. At the risk of angering Bavarian cooks, we will venture a recipe. Individual methods may vary.

This will take about an hour and a half, so make sure you aren't doing anything too absorbing, other than watching planes fly over.

Knödel can get very fancy, as Austrian variants attest. They can also be made of the same ingredients as go in Southern US turkey stuffing and covered with gravy for a down-home taste treat. There's a South in every country, remember.

If you can put up with Bavarian dialect, here's a wonderful interview with the Winters. It includes a bit of that pop song.

This video on Knödel-making has handy English subtitles, but is not uncontroversial. See the comment section for arguments about when to add salt, etc, and make your own culinary choices. Which might include not making Kartoffelknödel in the first place.

1Original translated from the website Merkur.de.2German slang for Americans.3Hard to pronounce. See the handy hint in this entry and the guide to German pronunciation here.4Singular=Knödel, plural=Knödel. Of course we looked it up.5Building wooden catapults to hurl harmless foodstuffs is a good teaching exercise used by physics instructors around the planet, and leading to 'punkin chunkin'' contests.