How To Use A Speed Peeler Content from the guide to life, the universe and everything 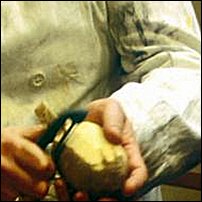 It's generally better for you to eat vegetables with the skin on. The skin's full of nutrients. However, many people still like their vegetables peeled, before either putting them in a salad or cooking them. Sometimes this is because the skin also has whatever was sprayed on it when it was growing in the field.

What is a Speed Peeler?

Speed peelers are hand-held devices that consist of a handle and a loosely attached, curved metal piece which has had the centre of the curve ground away to leave a slot with very sharp edges or blades.

The fact that the whole blade mechanism can move easily means that, as you peel unusually shaped vegetables, it will follow the contours, quite like a swivel-headed razor on a man's chin or woman's leg (or vice versa depending on the occasion).

There are two main types of speed peeler. One looks pretty much like a standard vegetable peeler and follows the style of a vegetable knife, with the blade part sticking straight out from the handle. The other type is more like a two-pronged fork with the tines1 set far apart and the blade stretched between them.

Let's go with the knife-shaped speed peeler. Remember that the blades on this are very sharp and will peel human skin just as fast as vegetables, so be careful how you handle it.

For ease of explanation, let's look at how to peel a common vegetable, the carrot. If you like to top and tail it (remove the green stem and the pointy end), do this with an ordinary vegetable knife - this isn't what speed peelers are good at.

Hold the carrot at the top (where the leafy bits grow from) in a similar way to how you'd hold a pencil when sharpening it with a knife, but have most of the carrot showing. Place the blade against the carrot and, with a little pressure, push it along the surface of the carrot, away from yourself. Hopefully, a sliver of carrot skin will have gone through the central hole in the blade and be sitting on the table top/board/newspaper/trousers in front of you. Turn the carrot slightly, and do it again. Continue until the carrot is naked at one end. Now flip the carrot around in your hand and perform the same action on the other end.

With potatoes you need to be very careful, as they tend to sit more in the middle of your hand when you peel them, leaving more of your skin handy for nicks and grazes. The speed peeler that resembles the knife has a distinct advantage over the fork-type one, in that it has a point at one end that you can use to gouge out the potato's eyes2. (That sounds much worse than it actually is.) The fork-style ones sometimes have handily placed protrusions for doing this, but with some you need an ordinary peeler or vegetable knife handy to carry out this task. You can keep repeatedly peeling with the speed peeler until the offending blemish is gone. However, you tend to throw away a lot more potato than is necessary.

One major advantage of using either of these devices is that the peel you remove is very thin, so you have much more of the vegetable left. They're also so fast that, if you do want to peel a thick-skinned vegetable like a swede3, you can go over the same bit very quickly until you're through to the sweeter part within.

Unlike some devices, they're really easy to clean, with nothing to remove or re-assemble when you've finished. They can go in with the ordinary cutlery in a dishwasher or be washed with the dishes in the bowl. But make sure you handle them carefully because of the very sharp blade.

Tip: Don't press too hard or you'll lose the advantage of the speed peeler. As you practise, you'll see that, unlike the comparatively hard work of using an ordinary peeler or vegetable knife, you can cover the entire surface of the vegetable in a fraction of the time, with much less effort. Don't be afraid to build up your speed. It's almost effortless when you get the hang of it. In fact, it can almost be a party trick to people who haven't seen them in action before - especially if you're someone who isn't known for being a demon in the kitchen.

Once you get the hang of using one, you'll find your old peeler very frustrating and slow.

1Tines are the spiky bits of a fork.2The bits of the potato that will turn into the shoots.3These are known as rutabagas in the USA.