The Green-skinned Children of Woolpit - a Medieval Mystery Content from the guide to life, the universe and everything 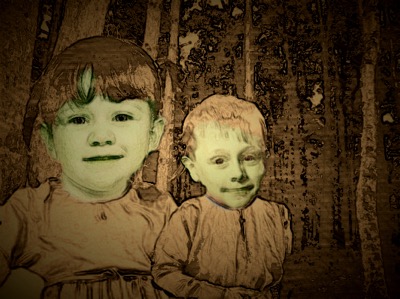 According to legend, one summer's day in England during the 12th Century was like no other. The denizens of Woolpit, a small village in the county of Suffolk, welcomed into their midst a couple of strangers. They were unaccompanied children, a young girl and an even younger boy, who had been discovered by field workers. Aside from the fact that their clothing was strange, they wouldn't ordinarily have drawn much attention, except for the colour of their skin, that is. It was green.

Life was simple in medieval England and the people would have been fearful or at least superstitious about events and things they could not understand. It's fair to assume some would have thought the children were related to the Green Man1 (AKA Jack-in-the-Green) or could even have been lost inhabitants of a 'fairy Otherworld', where green creatures were believed to reside. Attempts to communicate with the children were unsuccessful; they could speak, but no-one in the village could understand their language. Unsure what to do with them, it was eventually decided to hand them over to the wealthy owner of a local manor, Lord Richard de Caive. He was intrigued by the strange pair, took pity on them and gave them a home. The children flatly refused to eat any meat, preferring only raw broad (fava) beans. Lord Richard had the children baptised at the local church but not long after, the boy became sick and died. This was not an unusual occurrence due to the lack of basic healthcare we take for granted today. In olden days infant and child mortality rates were high due to lack of sanitation and hygiene and no inoculations against disease, etc.

The girl, who had been given the name Agnes, thrived and eventually learned the English language. Agnes told Lord Richard that she and her brother had come from a land where everything was green, and she had never seen the sun from there. She had no idea how they had arrived in Woolpit, but they had been following the sound of church bells after becoming lost. Over time Agnes adapted to life in the manor and gradually her skin lost its green hue. Historians disagree as to whether Agnes married Lord Richard's godson or a local clergyman2 named Richard Barre (c 1130-1202), but she was thought to have had children, and some people living today claim her as an ancestor.

The tale of the green-skinned children inspired authors such as Herbert Read, who wrote The Green Child in 1934. Some writers such as Robert Burton (The Anatomy of Melancholy, 1621) and Bishop Francis Godwin (The Man in the Moone, probably written in the late 1620s), thought of them as extra-terrestrials - but not the alien creatures we like to imagine today. Burton suggested they had fallen from Heaven, whereas Bishop Godwin, under the pseudonym Domingo Gonsales, referenced them as 'lunar children' - who hailed from the Moon. Back on Earth in Suffolk, two green-coloured children appear on the Woolpit village sign which was erected in 1977.

What are we to make of this medieval mystery? It could simply be that the children had lived in a forest community (hence the lack of sunlight) and run away in search of adventure, but were unable to find their way back home. The green hue of their skin could have been hypochromic anemia caused by an inadequate diet. One conspiracy theory suggests that the children were human/alien hybrids - a result of alien experimentation - but the only way we could obtain proof would be if we could obtain an interview with the alien who knows everything about everything but at the time of writing he/she has yet to respond to our request.

1A pagan figure and/or nature spirit, depictions of which date back to 400 AD. British and European churches dating from the 11th Century have stonework foliate Green Man heads, and stained glass windows surviving today have similar images.2The history of celibacy among the clergy is a bit convoluted, but if you're curious, you can read more here.