The Beginner's Guide to Proxy Baptism Content from the guide to life, the universe and everything 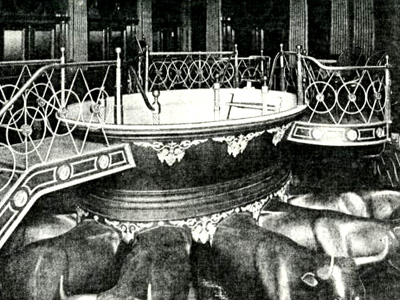 Most, if not all, Christian churches regard baptism as a rite, ritual, sacrament, or ordinance1. Although many Christians may not have thought much about it, the origin of baptism as a religious practice goes back to St John the Baptist, a Jewish prophet who immersed his followers as an act symbolising repentance for their sins and a determination to live a new life.

The Greek verb βαπτίζω, or baptizo, means 'to immerse'. Thus, Orthodox Christian churches immerse their initiates, whether converts or infants, as do those who practise adult, or believer's baptism2. Other Christians, such as Catholics, Lutherans, Anglicans, and Methodists – all churches with a tradition of infant baptism – limit themselves to a token sprinkling or pouring of water on the head.

One thing all of these religious traditions have in common, however, is a requirement for the actual, physical presence of the person being baptised. Consent is not always required – infants cannot consent to the ritual. Being there to be dunked, sprinkled, or poured-upon, however, is a must.

This is not the case with proxy baptism. Let us take a moment to consider this religious practice and its implications for the practitioners, interested bystanders, and – possibly, depending on one's personal belief system – the baptisees.

Why Baptise by Proxy?

Even in the Middle Ages, Christians used to worry about the people who were born in the period of history we sometimes call 'BC', meaning 'Before Christ'. If Jesus died to save people from their sins, and believing in Him made them 'saved', or able to cross over into a better world, what about all the poor souls who died before He came? Surely it was unfair that they lacked the opportunity to join the movement. The Church had an answer: even the temporally disadvantaged could have believed in Jesus. People who had the right stuff were called 'righteous heathen'. One example was Plato. Everybody was sure Plato was saved because the ideas he expressed were acceptable to Christian thought (largely because these ideas were part of the foundation of Christian thought). Another 'righteous heathen' was believed to be the Sybil in Rome, because of the legend that she predicted the birth of Christ. Teachings like this reassured the faithful for centuries.

But what if you believed that being baptised was necessary to salvation? That put Christians in a quandary, particularly those who believed – as so many book-based monotheisms tend to do – that their group, and theirs alone, possess the keys to the Kingdom. Convinced of the rightness of their doctrine these people may be, but they are often compassionate individuals. It hurt them to think that their ancestors were going to Hell just for being born before [insert name of Prophet here] came along with the one true faith. What to do?

The Church of Jesus Christ of Latter-day Saints, whose followers are also known as Mormons, have found a unique solution to the problem. In order to allow humans from everywhere in the space/time continuum to join the blessèd throng, rather than only those fortunate enough to have come along after their Prophet, Mr Joseph Smith, had his revelations in the Burned-Over District of New York3, they needed a way to bring the departed lost sheep into the Mormon fold. The LDS solution was a novel one, at least in 19th-Century America: if the departed could not come to be baptised, baptism could come to them. They would baptise people by proxy.

Is Proxy Baptism a New Idea?

The quotation above is to be found in any Christian Bible. Few Christian groups have taken it as seriously as the LDS Church. According to the official LDS website, this verse of the Bible was the inspiration for the practice of proxy baptism, as Mormons believe that baptism is necessary for salvation. According to this source,

Because all who have lived on the earth have not had the opportunity to be baptized by proper authority during life on earth, baptisms may be performed by proxy, meaning a living person may be baptized in behalf of a deceased person. Baptisms for the dead are performed by Church members in temples throughout the world.
– Official Website of The Church of Jesus Christ of Latter-day Saints.

The website goes on to point out that the remains of the deceased are in no way disturbed, and that their names are not added to Mormon membership rolls. Church members are merely standing in as proxies in order to perform a service to the deceased. In Judaism, this sort of selfless act might be termed a mitzvah, like saying Kaddish, the prayer for the dead, on the anniversary of someone's death. Unlike saying Kaddish, however, the practice of proxy baptism has generated some ire among other religious groups.

Why Not Perform Proxy Baptisms?

In the 21st Century, controversy over Mormon proxy baptism has centred on two issues:

To deal with the issue of disrespect first: it has been reported that Holocaust victims, including Anne Frank, have been baptised by proxy. Another controversial choice was Daniel Pearl, a (Jewish) journalist who was a victim of terrorists. Mahatma Gandhi has allegedly also been the subject of proxy baptism. In response to expressions of disapproval by other religious and cultural groups, the LDS Church have promised to stop the proxy baptism of Holocaust victims.

To aid in the identification of possible candidates for proxy baptism, the LDS maintain a large genealogical database. These records are available for consultation by historians and family history researchers. It may be an uncomfortable thought to those who do not wish to find that some zealot has baptised their grandmothers, but if the genealogical information is available online, the chances are good that the LDS have it, as well.

No one appears to be accusing the Latter-day Saints of proselytising by proxy. After all, those who have different beliefs are likely to regard as mere superstition the claim that the Mormons have managed to baptise Aunt Agnes into 'Mormon heaven'. Beliefs about the after-life are individual, after all. However, many of the living are offended on behalf of their departed loved ones. After all, what would Aunt Agnes have said about someone baptising her without her consent? Quakers, for example, do not perform baptisms. In past centuries, this refusal to conform to church rituals cost Nonconformists a lot – often, they were persecuted. The living may well feel that the memory of their ancestors' acts of conscience has been dishonoured.

Religion is a personal matter, even in societies with official churches. One person's idea of a mitzvah may be another's idea of unacceptable meddling. Other churches are unlikely to adopt the practice of proxy baptism, and it is to be predicted that in future, most Christians will continue to insist that you show up for your own christening (as well as for your own burial).

1Baptist churches, for example, insist that there are no 'sacraments'. Instead, they observe 'ordinances'. The differences are subtle and theological. Southern Baptists observe only two ordinances, baptism and the Lord's Supper, a non-transubstantiational form of Communion which never involves alcohol. Primitive Baptists often include foot-washing and the anointing of the sick with (vegetable) oil as ordinances.2'Believer's baptism' is the more accurate term, as some evangelicals will cheerfully baptise five-year-olds who request membership.3The Burned-Over District of upper-state New York was so called because of its extreme enthusiasm for the Second Great Awakening in the early 19th Century. The idea was that the fire of evangelism had left nothing untouched. In addition to the LDS Church, other movements owe their origins to the Burned-Over District. Among them number the Millerites, who predicted the Second Coming in 1844, and later gave rise to Adventism; the Shakers, who gave the world the clothespin; the Fox Sisters, who chatted with dead people; and the Oneida Society, which practised group marriage.