Stolpersteine - An Everyday Memorial Content from the guide to life, the universe and everything 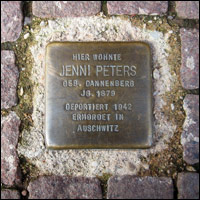 You walk along a quiet city street somewhere in Germany. The shadows are long, the church bells are ringing, the river glints in the evening sunlight and it's pleasantly warm. Crowds are rushing by, in the way crowds do between the end of work and the beginning of the evening's television special, but you don't mind. You've got time. You stoop to tie your shoe and there, among the pigeons squabbling over bits of ice cream cone, you see something shiny. It appears to be a brass paving stone. A surveyor's benchmark? A hydrant cover? There seems to be something written on it, etched out in shadows against the bright brass.

Even if your German's not too good, you can make out a few words. And the name that jumps out at you - Auschwitz - is chillingly familiar. But what does it mean?

An Artist Has An Idea

In 1990 Gunter Demnig, a sculptor from Cologne, Germany, carried out a citywide project to commemorate the deportation of 1,000 Gypsies from Cologne in May 1940, which served as a kind of 'dress rehearsal' for the later large-scale deportations. Using a rollable printing machine, Demnig drew a paint trail 16 km long from the victims' houses to the exhibition grounds at Cologne-Deutz, formerly an outpost of the concentration camp Buchenwald1.

When the paint began to wear off, Demnig installed small brass points to help trace the path instead. While he was working, a woman old enough to have been an eyewitness approached to tell him that he must be wrong, because there had been no Roma living in her neighbourhood - and was very surprised when he showed her documentation that proved otherwise.

Rather than just laying a trail, Demnig wanted to commemorate each victim individually - an abstract idea at first, because of the sheer scale of the project. However, the pastor of the Antoniterkirche, a Gothic cathedral in the centre of Cologne, persuaded the artist to at least make a start. He produced 250 memorial stones, which were displayed in the church. In 1995 he installed some of them - illegally - in front of the victims' houses; in 1996 he placed several dozen more in Berlin, again without authorisation. With the project gaining more and more publicity and interested volunteers, many cities granted permission, though some still will not - or require a long and often public discourse before they will do so.

Each stone consists of a small brass plaque mounted on a 10×10cm cube of concrete, with the name, birthdate and fate of a victim embossed in it - by hand, because Demnig sees this personal touch as part of the process of transforming the victim back from a number, mechanically destroyed in a concentration camp, to a real person with a name and a story. Despite their name - Stolperstein means 'stumbling block' - the stones are mounted flush with the pavement, in front of the last place in which the victim lived, that is, the last home they chose for themselves. They're not meant to make you literally trip over them. Rather, as a schoolboy working on the project described their purpose in an interview: 'no, you don't trip and fall down, you trip with your head and your heart'.

This differentiates the small, scattered markers from the large memorials in which remembrance has become ritualised, and makes the enormous scale of the atrocities easier to grasp. Ten million2 is an abstract number; seeing reminders throughout the city, throughout the day, shows that these were ordinary people leading ordinary lives among their friends and neighbours. The very act of bending down to read the inscriptions is a kind of reverence, a brief interruption of one's everyday routine rather than a planned remembrance.

There are now over 20,000 Stolpersteine, with over 2,000 each in Berlin and Hamburg alone. They have been placed in 480 German cities as well as in Austria, the Netherlands, the Czech Republic, Hungary, Belgium and the Ukraine. More are planned for Denmark, Italy, Poland, and France. Most commemorate people who were shot, killed in concentration camps, deported to ghettos or who committed suicide - though a few stones tell happier stories of people hidden by neighbours or shuttled to safety in other countries. While the majority mark places where victims lived, others have been placed where they worked or taught - or, in a few precious cases, survived. Besides Jews, the victims remembered include Gypsies, homosexuals, political opponents, disabled people, Jehovah's Witnesses and members of other ethnic, political and religious minorities and resistance groups.

Each stone costs €95 and is paid for by a private sponsor, though many of these are volunteer organisations dedicated to the cause who research the names and biographies of victims and buy and maintain the Stolpersteine. For the first memorial stones, Demnig worked together with Rom eV, the Gemeinnütziger Verein für die Verständigung von Roma & Sinti, a non-profit organisation to promote understanding of Gypsy culture, but other groups require different kinds of research. Besides official documents, resources include private address books, newspaper clippings and the vast databases of the Yad Vashem, the Holocaust Martyrs' and Heroes' Remembrance Authority in Jerusalem, Israel. Work on the project is often done by schools, as a hands-on learning experience for pupils being taught contemporary history.

One of the greatest critics of the Stolpersteine project is Charlotte Knobloch, president of the Zentralrat der Juden in Deutschland, the Central Council of Jews in Germany. She objects to the fact that the stones are set in the pavement, where they will be dirtied and where people step on them, saying that it is demeaning to the memory of the victims of the Holocaust3. She would prefer the names to be listed on plaques at the towns' central memorials, and has caused the stones to be forbidden in her hometown, Munich, where they can only legally be placed on private property and have been removed from public areas by the city. This opinion, however, is by no means representative of the entire Jewish community - for example, Salomon Korn, the vice president of the council, is a strong proponent of the project. In the cities where the stones have been banned, many people continue to buy them in the hope that the law will be changed.

Others object because they do not want to be constantly reminded of the past, part of the wider debate over collective German guilt and the correct balance between remembering and getting on with life, with some critics claiming that Gunter Demnig is using the political climate to turn a tidy profit selling millions of stones at (nearly) €1004 apiece. The current residents of some houses bearing the memorial markers are uncomfortable with the reminders that their homes once belonged to someone else, to people who were often forcibly dispossessed. Others worry that such a reminder will negatively affect the value of their property. Some, unfortunately, are just anti-Semitic or even fully-fledged Holocaust deniers - one shop owner in Zossen is fighting the city council over the stones in the walkway in front of his building, going so far as to say, 'if I'd known that Jews had lived here before, I would never have bought the place.' It's to counter such thinking that the stones are intended, as reminders that ordinary people from every neighbourhood - friends and neighbours to those living there - were persecuted merely for being different.

How To Get Involved

There's a good chance that you'll see a Stolperstein in many cities, large or small, if you're travelling in Germany or any other country that was occupied by the Nazis during World War Two. If you'd like to look for them specifically, many cities have websites dedicated to the stones there. Some, like Hamburg's5, include extensive biographies. Other websites include Germany-wide maps or photo databases. Reading German is, of course, an asset in these cases, though some have English versions.

If you live in a community that was affected - and it would be difficult to find one that wasn't in the formerly occupied areas - you can join one of the numerous organisations dedicated to research for and upkeep of the Stolpersteine, or start your own. Contact Gunter Demnig or the coordinators of various regional initiatives for assistance, or visit the Stolpersteine website6 for more information.

1The concentration camp itself was some 350km to the east of Cologne in Thuringia, near Weimar, but the exhibition halls were used to hold and collect people before they were shipped off; the nearby train station was a major hub in the railway network through which a majority of victims were deported.2The commonly cited figure of six million killed in the Holocaust refers to the estimated 4.9 to 6.2 millions Jews who were murdered, but there were an estimated 3 to 5 million other victims.3The Jewish community in Cologne, where the project began, stated that the markers are memorials, but not gravestones, and as such, the Talmudic prohibition against stepping on a grave does not apply.4Demnig describes the project as his life's work, almost to the exclusion of any other artistic endeavours. That he's hoping to get rich quick is highly unlikely. The €95 price includes material and labour costs (since all stones are hand-made, Demnig has had to hire a second artist to help him) and often even the installation.5English version of the site; the German version has more information.6Only in German, for now.