Palatschinken Content from the guide to life, the universe and everything 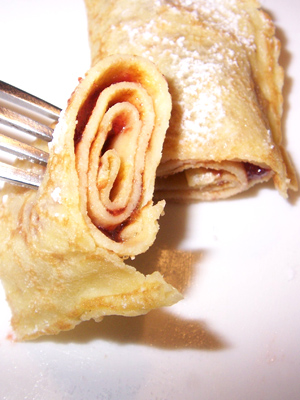 Palatschinken is the Austrian name for a kind of pancake that is known throughout the lands of the former Austrian Empire. Although Germans often seem to think 'der Palat-schinken' has something to do with ham1, in fact 'die Palatschinke' is derived from the Czech word 'palacinka', cake2.

Palatschinken are large and almost as thin as crêpes. When filled they are most of the time rolled, but sometimes also small 'pockets' are formed around the filling - and there are plenty of different things to put into Palatschinken. They can be eaten either as a main dish or dessert.

The ingredients of Palatschinken are the same as for a standard pancake. The following amounts will be enough for about five pancakes in a pan of 25-30cm diameter. For more pancakes just add more milk and flour.

Mix milk, eggs and salt in a bowl, then add flour until the batter has a still very fluid, soup-like consistency, just a bit thicker than milk. If it gets too thick add some more milk, if too fluid add more flour. Put some butter or margarine into a large pan and let it get hot on the stove. Take a ladle full of the batter (or a bit more, depending on the size of the ladle and the pan) and pour it into the pan, then pick the pan up and move it so the batter runs to all edges. The batter will get solid rather fast, so you have to be quick. If you notice there's not enough batter you will have to take more for your next pancake.

Frequently move the pan to see if the pancake still sticks on it. When it moves freely you can turn it to its other side with a spatula - unless you master the art of throwing pancakes.

If necessary you can turn the pancake a few times until it gets golden-brown spots. Then take it out of the pan and put it on a plate. Either eat it immediately or collect all the pancakes in a stack and put them in a warm oven.

Your resulting pancake should have a thickness of about 1 or 2mm; if this is not the case you will have to either add more milk to your batter or put less batter into the pan. It may take a few tries until you get it right.

Always add some butter or margarine to the pan before you put in new batter.

Ways to Eat Them

Now that you have your pancakes you need something to put into them, of course. There are more possibilities for this than a single Entry can show, but the following is a collection of the most common fillings.

When people eat Palatschinken at home, their most common filling is apricot jam. Take a spoonful of jam and spread it on the pancake, then roll the pancake and sprinkle it with icing sugar. You can also fill them with chocolate or nougat cream from a jar, although chocolate sauce may then be preferred to sugar as a topping.

You can also make a batter with more flour for thicker pancakes, which you fill with ham and cheese. Keep the filled pancakes warm in the pan for a bit to let the cheese melt.

If the pancakes are eaten for dessert they can also be filled with ice cream. Take the ice cream flavour of your choice (or two different flavours) and roll it into the pancake, then pour some warm chocolate sauce over it. You can also add whipped cream and fruit.

Thoroughly mix the butter and sugar, then add the two egg yolks, curd cheese, lemon peel and raisins. Beat the egg whites until they are stiff and carefully add them to the mixture.

Put a decent amount of the filling on each pancake, then roll them and put them into a baking dish. Mix the ingredients of the topping and pour it over the pancakes. Bake them in the oven at 200°C for about 30 minutes, until they are golden.

Pancakes with nut filling are a Hungarian invention of the early 20th Century. It is known also in Austria and Slovakia and has a few different variations.

Heat up the milk and dissolve the sugar in it, let it boil up slowly and then add the other ingredients. Spread the filling on the pancakes and roll them. Then add whipped cream and sprinkle with chocolate sauce (or a sauce made from chocolate and rum).

Hortobágyi palacsinta are pancakes with a savoury filling of meat and tomato sauce.

Filling for about 6 pancakes:

For the filling, heat some oil in a pan, then add the chopped onion, garlic, tomatoes, bell pepper and meat and let them roast until the meat is brown. Flavour with paprika, but take care that it doesn't burn. Then add a bit of water and let it stew for 15 minutes. Season with salt and pepper.

For the sauce, roast the chopped onion in a pan with butter and add garlic and parsley. Sprinkle some flour over it, then add the beef broth (and wine) and let it boil up slowly. Take the pan from the stove and stir in the sour cream. Season with salt, pepper and parsley.

Put some of the filling into each pancake and wrap it like a burrito. Put them on plates and pour the sauce over them.

A different way to eat Palatschinken is to use them in soups. The unfilled pancakes are rolled and then sliced to a kind of noodle, about 5mm wide (they unroll when sliced, of course). They are then put into soup bowls and beef broth is poured over them. If you want to do this be sure to always have enough broth, because the pancakes soak up quite a lot of it. This 'Frittatensuppe'3 is probably the most favourite soup of Austrians and is available as a standard soup in all restaurants.

New fillings for Palatschinken seem to be invented all the time and whole cookbooks are devoted solely to the subject of pancakes. A rather common filling is spinach, often combined with salmon.

You can also make a pancake-cake by preparing some cake filling (for instance a chocolate cream) and spreading it between layers of pancake. Or make a filling with cream cheese and fruit. It is even possible to make a savoury cake - something like a lasagna.