Buster Brown's Flying Columns: The Canadian Plan to Invade the US Content from the guide to life, the universe and everything 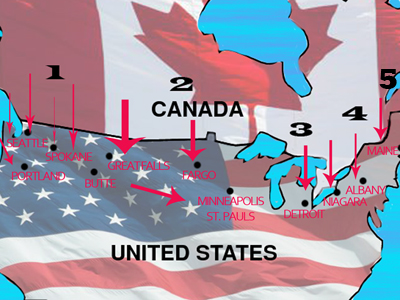 Do I do business with Canadian racketeers? I don't even know what street Canada is on.
– Al Capone

To most denizens of the 21st Century, the idea that the United States might invade Canada is ludicrous, the stuff of jokes and satirical films like Canadian Bacon. The idea that Canada might have a secret plan to invade the United States is frankly beyond ridiculous. But guess what? In 1921, a Canadian military planner did come up with a scheme for invading those bullies to the south. But before we tell you why, let's go back a couple of hundred years and explain how that border between the two countries got there in the first place.

Drawing Lines in the Snow

Before 1776, there was no country called Canada. That is because there was no country called the United States of America. So it is possibly inaccurate to state, as many do, that the US first tried to invade Canada during the War of Independence. One could more accurately say that the Continental Army tried (unsuccessfully) to take territory that belongs to present-day Canada. Brits and Loyalists chased them off. US people don't know this unless they paid attention in history class, but about 40% of citizens in the original Thirteen Colonies were Loyalists. Many of these moved north in order to stay in the mother country and get away from bullying from the 40% who wanted independence. (20% were neutral on the subject.)

The 1783 treaty that ended the war had some issues. One of them was maps: the negotiators' weren't very good. Border disputes were inevitable. Some questions remained as late as the 1850s.

The War of 1812 involved the US and Canada in more border skirmishing. Canadians were quite hot against the US at the time due to Yankee depredations in their territory. In fact, it was at the Canadians' request that the British set fire to the White House in retaliation, an event Canadians still celebrate in song.

After the War of 1812, border disputes continued to be a problem. A master of diplomacy, US Secretary of State John Quincy Adams worked out major settlements during the Monroe administration. The Convention of 1818 settled territorial disputes in Maine, demilitarised the Great Lakes, and fixed the Midwestern border at the 49th Parallel. Both sides agreed to share the Oregon Territory peaceably. However, joint custody of the rich timber and fishing region was only temporary: in 1844, James K Polk won the US presidential election with his claim-Oregon slogan of '54-40 or Fight!' Meaning, 54° 40' north latitude. Canadian territory was rescued by the Mexican War: the US didn't want to fight on two fronts. So the northern border became set at 49°. Peace at last. The Fenian threats to invade Canada in the 1870s don't count, nor does the time the two countries almost went to war over the pig shooting incident on San Juan Island. Maybe they should count, but we've decided that they don't.

US relations with the British Empire were rocky at best, from the founding of the United States up until the British manoeuvred the burgeoning world power into entering the First World War. The US-British 'special relationship' really dates from the 1941 Atlantic Charter, a deal cooked up by US president Franklin D Roosevelt and British Prime Minister Winston Churchill. The two leaders were determined to fight Hitler, and to do it together. But as late as the 1920s, it wasn't completely clear that the US and the British Empire would never need to go to war against each other. That's where the war plans came in.

Britain was an ally of Japan from 1902 to 1923. The two nations had first bonded over mutual interests after fighting on the same side in the Boxer Rebellion in China. The US, on the other hand, was in serious rivalry with Japan all over the Pacific. In addition, Britain owed the US $22 billion after the First World War, and haggling over payments was causing friction. The danger that the US and Britain might eventually clash was what necessitated the war plans. In 1930, the US designed 'War Plan Red' as part of a multi-scenario, colour-coded set of plans aimed at a lot of possible enemies, just in case. If the British Empire started anything, the US plan was to seize Canada and defend North America. That was it.

Interestingly, the Canadians had already come up with a daring plan in 1921. It was all Buster Brown's doing.

Defence Scheme No 1, the Canadian plan to invade the US, was the brainchild of Lieutenant-Colonel James Sutherland Brown, also known as Buster Brown1. Sometimes (often) described as a 'loose cannon', the patriotic Brown nevertheless had orders from Higher Up for what he did. To prepare his top secret report, Brown and his men donned civilian clothes, climbed into a Model T Ford and headed south, infiltrating enemy territory. In other words, they drove around Vermont and talked to people.

Buster Brown kept observations on the local populace in his notebook2. He remarked that Vermont men were 'fat and lazy but pleasant and congenial.' In fact, Brown thought they were more like Canadians than most Americans, who were ruder. Brown found the local women 'a heavy and very comely lot.' Brown could be called the TE Lawrence of Canada, going undercover among the natives like that.

The plan Brown devised called for a lightning strike from Canada in the event of war. His idea was to have 'flying columns' of Canadian military rush across the border and attack what Brown regarded as key US positions3. After inflicting as much damage to the infrastructure as possible, the Canadians were to beat a hasty retreat, ripping up highways and railway tracks as they went. Then the Canadians would assume a defensive posture and wait for rescue from imperial forces. The overall plan looked like this. Yes, Fargo, North Dakota was a target.

Would This Have Worked?

Needless to say, Defence Scheme No 1 was never put into effect. One reason the world didn't learn about its existence, even, until the 21st Century was that Brown's successor hated the plan. He hated it so much, in fact, that he burned all the copies he could find. The only known extant copy of this plan is at Queen's University in Canada, in a collection of James Sutherland Brown's papers.

But would this plan have worked? A journalist from the MinnPost asked this question of a military history expert4. The Canadian military historian opined that, 'at best', Buster Brown's flying columns 'would have made Pancho Villa and his thugs look like icy professionals.' Imagining a conflict like this in the flivver-and-tommy-gun era inevitably conjures up scenes out of silent gangster movies.

Maybe Brown's flying columns could have done enough damage to hold off the Yanks until the Brits showed up. Maybe not. People on both sides of the border are glad they never had to find out. The Canadian-US border remains a fairly peaceful stretch of real estate these days, and we can afford to joke about invasions. Long may this situation continue.

Since the only copy of Buster Brown's plan is at Queen's University, you might head to Kingston, Ontario, Canada. (Bring your passport and cross the border legally and politely, please.)

If you can't go to Ontario right now, you can read some excerpts from this amazing report online at Taoyue, 'From the Stacks: Canadian Defence Scheme Number One'. It's worth it: Brown's attitudes toward just about everybody not in his personal demographic were politically incorrect, to put it mildly. Enjoy this trip to the thought processes of the past.

Want to know more? Want to find out about the secret US plan to invade Canada? Read Kevin Lippert's book, War Plan Red, available for purchase.

1No, we don't know if he had a pit bull terrier named Tige. Buster Brown was a popular comic book character at the time, and the mascot of a shoe company, hence the popularity of the nickname.2These notebook details come from Zane Schwartz, 'How Canada planned to invade the US (and vice versa)', in Maclean's, 27 November, 2015.3The plan also called for 'reclaiming' the state of Maine. Why 'reclaim'? Because, as Canadians (but not US people) know, Canada took Maine in 1814 (during the War of 1812), and the US (unfairly) got it back.4Andy Sturtevant, 'What if Canada had acted on its 1921 Defence Scheme No 1 and invaded the US?', 4 November, 2016.