The Pig War of 1859 Content from the guide to life, the universe and everything 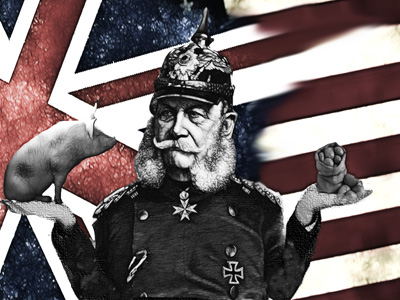 On 15 June, 1859, an American Homesteader, Lyman Cutler, was inspecting his potato field. He found his neighbour's boar hog1 rooting up his crop. He knew the pig belonged to Charles Griffin, a manager for the Hudson Bay Company. This was not the first time a pig had attacked his crop and he had previously demanded the animals be confined to the company's property. As a last resort he raised his rifle and killed the pig.

This simple act would bring the United States and Great Britain to the brink of war.

The San Juan Islands are located on the west coast of North America near the border of the United States and Canada. There are about 400 islands in the archipelago at high tide (considerably more at low tide). The four largest islands (Orcas, Lopez, Shaw and San Juan Island itself) have a large population and have both ferry and air service today.

Like most of the Pacific Rim, the islands are all volcanic in origin. Most of the land is quite hilly although there are several level areas. The highest point is Mount Constitution on Orcas Island that rises almost half a mile above sea level.

The Louisiana Purchase from France in 1803 extended the United State's territory west to the ridge of the Rocky Mountains. Beyond that, the land south of the modern northern border of California was claimed by Mexico, all the land to the north was claimed by Great Britain. The Lewis and Clark Expedition2 had pushed itself to the Pacific coast, across the Oregon Territory.

In 1818 the British reluctantly agreed to share the occupation of the Oregon Territory with the United States.

In 1844 an almost-unknown politician was selected to run for the US Presidency, James K Polk. When asked about the Oregon Territory he launched the slogan 'Fifty four forty, or fight'. This was the southern border of the Alaskan territory claimed by Russia, effectively denying any British access to the Pacific coast.

Polk did manage to be elected President. His real goal was to secure the entire Pacific coast of the United States. The US had been asking that the existing northern border along the 49th parallel be extended to the Pacific coast. Britain had refused, partly because its Hudson Bay Company had a large farm operating near the mouth of the Columbia River.

A treaty agreed to in 1846 established the new border to follow the 49th parallel to the coast and follow the main ship channel dividing the continent from Vancouver Island, south to the Strait of Juan de Fuca and then to the ocean, clearly leaving Vancouver Island as British territory.

The one big problem was there were two 'ship channels'. The Rosario Strait lay to the east of the San Juan islands, making them British territory - the Haro Strait is to the west of the islands making them United States territory. Each side chose their own channel and allowed their people to settle on the islands.

The Hudson Bay Company moved their farm from the Columbia River to San Juan Island.

Having secured the northern portion of the Pacific coast, President Polk turned his attention to the southern part, known as California. The first move was to annex the Republic of Texas as a US territory. This was viewed as an act of aggression by Mexico.

After a short but bloody conflict, the Mexicans surrendered most of what is now the south eastern United States3

In 1849 gold was discovered in California. Thousands of treasure seekers flocked to the newly-acquired west coast by both land and sea. All of the most desirable sites were soon claimed, leaving the latecomers empty-handed. In 1854 the US territory of Washington established Whatcom County, containing the San Juan Islands, and assessed property taxes. The Hudson Bay Company refused to recognize any US authority and ignored the tax notice.

By 1859 at least 25 American4 settlers had arrived on the San Juan Islands and established homesteads. The United States and Great Britain had been holding negotiations over the ownership of the islands, but it was clear that neither side would back down.

The killing of Griffin's pig was just the catalyst to bring the situation to the point of crisis. At one point Cutler offered to pay $10 in compensation for the pig. Griffin not only refused the offer, but demanded $100 for his prize pig. Cutler revoked his offer. He supposedly replied:

'You need to keep your pigs out of my potatoes.'

'You need to keep your potatoes out of my pig!'

Griffin demanded Cutler's arrest, and both sides requested support from their own government.

American General William Harney was the first to respond, ordering 66 soldiers under the command of Captain George Pickett5. Pickett's orders were simply to prevent any British forces from landing on the island.

The British responded by sending three war ships into the area. Harney reinforced the American defence to 450 men and 14 cannons under the command of Colonel Casey. The British added two more ships, bringing their total presence, under the command of Rear Admiral Baynes, to 2,140 men and 70 guns. The two commanders met, and together they decided that it would be foolish to escalate the death of a pig into a violent confrontation.

When word of the confrontation reached the leaders in London and Washington DC, both sides were horrified that such a minor incident had risen to a tense stand-off. They agreed to reduce the forces on the island to one hundred for each side. The British built a camp near the northern end of the island, while the Americans built one of their own well to the south.

The United States would soon be distracted by the secession of the southern part of the nation. While huge armies fought to preserve, or divide, the republic, the small outpost on San Juan Island continued their stand-off.

At last the Civil War, and its aftermath, was over and the United States and Great Britain resolved to finally settle their dispute over the border. It had become clear that the two nations could never agree on a solution between themselves, so in 1871 they agreed to allow an independent entity to act as judge and consider the evidence of each side.

Kaiser Wilhelm I of Germany was selected as arbitrator and he appointed a three-man panel who met for almost a year, considering all the arguments of each side.

In the end the committee placed the border through the Haro Strait, leaving the islands as American territory. By the end of the occupation Vancouver Island and the mainland were no longer British, but had become part of the Dominion of Canada. After over 12 years of confrontation, the only death reported from either side was Griffin's pig.

To this day American Park Rangers still hoist the Union Flag over the site of the British camp to respect the men who participated in this conflict.

1A male pig.2Two American army officers who were ordered by President Jefferson to map and explore the newly-added land.3The Gadsden Purchase of 1854 completed the modern US border.4For the purpose of this Entry 'American' should be read as citizens of the United States.5Pickett would soon become famous as a Confederate general who ordered his division to make a disastrous charge in the US Civil War.