Today's Oddity is a piece of text. The picture's just for lagniappe. In our researches, we found out what Mark Twain said about the Fenians, and we thought it might stir some stray outrage. Anyway, Mr Twain was always a good, snarky journalist, and we couldn't forbear sharing.

Which reminds us that the Guide Entry on the Irish invasions of Canada is long overdue – get writing! Read the songs here. 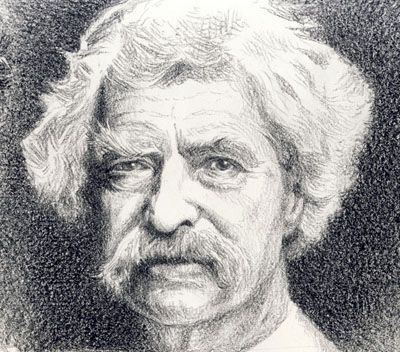 Editor's Note: At the time Mr Twain wrote this, he was editor and part-owner of the Buffalo Express, a newspaper in upper-state New York. His readers were always interested in what went on along the Canadian border, including the Fenian raids. We sort of wish we could get Twain and Stephen Colbert together for a sit-down, don't you?

There is one other thing which transcends the powers of burlesque, and that is a Fenian "invasion." First we have the portentous mystery that precedes it for six months, when all the air is filled with stage whisperings; when "Councils" meet every night with awful secrecy, and the membership try to see who can get up first in the morning and tell the proceedings. Next, the expatriated Nation struggles through a travail of national squabbles and political splits, and is finally delivered of a litter of "Governments," and Presidents McThis, and Generals O'That, of several different complexions, politically speaking; and straightway the newspapers teem with the new names, and men who were insignificant and obscure one day find themselves great and famous the next. Then the several "governments," and presidents, and generals, and senates get by the ears, and remain so until the customary necessity of carrying the American city elections with a minority vote comes around and unites them; then they begin to "sound the tocsin of war" again – that is to say, in solemn whisperings at dead of night they secretly plan a Canadian raid, and publish it in the "World" next morning; they begin to refer significantly to "Ridgway," and we reflect bodingly that there is no telling how soon that slaughter may be repeated. Presently the "invasion" begins to take tangible shape; and as no news travels so freely or so fast as the "secret" doings of the Fenian Brotherhood, the land is shortly in a tumult of apprehension. The telegraph announces that "last night, 400 men went north from Utica, but refused to disclose their destination – were extremely reticent – answered no questions – were not armed, or in uniform, but it was noticed that they marched to the depot in military fashion" – and so on. Fifty such despatches follow each other within two days, evidencing that squads of locomotive mystery have gone north from a hundred different points and rendezvoused on the Canadian border – and that, consequently, a horde of 25,000 invaders, at least, is gathered together; and then, hurrah! they cross the line; hurrah! they meet the enemy; hip, hip, hurrah! a battle ensues; hip – no, not hip nor hurrah – for the U. S. Marshal and one man seize the Fenian General-in-Chief on the battle field, in the midst of his "army," and bowl him off in a carriage and lodge him in a common jail – and, presto! the illustrious "invasion" is at an end!

The Fenians have not done many things that seemed to call for pictorial illustration; but their first care has usually been to make a picture of any performance of theirs that would stand it as soon as possible after its achievement, and paint everything in it a violent green, and embellish it with harps and pickaxes, and other emblems of national grandeur, and print thousands of them in the severe simplicity of primitive lithography, and hang them above the National Palladium, among the decanters. Shall we have a nice picture of the battle of Pigeon Hill and the little accident to the Commander-in Chief ?

No, a Fenian "invasion" cannot be burlesqued, because it uses up all the material itself. It is harmless fun, this annual masquerading toward the border; but America should not encourage it, for the reason that it may some time or other succeed in embroiling the country in a war with a friendly power – and such an event as that would be ill compensated by the liberation of even so excellent a people as the Down trodden Nation.