La Cucaracha: Political Lessons from the Cockroach Content from the guide to life, the universe and everything 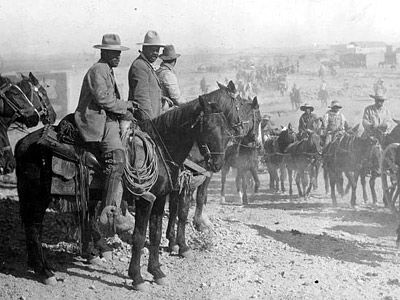 Before remarking that this is a very odd chorus for a patriotic song, English speakers should consider the lyrics to Yankee Doodle, Dixie, Waltzing Matilda, or On Ilkley Moor Bah't 'At1. While a corrido might not be to everyone's taste outside folk-singing circles, La Cucaracha is a song well worth learning for its historical significance as well as its folksy humour. A people who can speculate musically about what their most popular political figure looks like without his shirt on is equipped to deal with a lot of adversity.

What's a Corrido When It's at Home?

A corrido is a very old form of folk song, dating back to the medieval verse romance. In its classical form, a corrido consists of an introduction by the narrator, a story, and a moral. In that sense, a corrido is not unlike a moritat2 in that it tells a story, often with snide commentary. Like the moritat, the corrido most often deals with crime, love, vengeance, and the sufferings of lower-class people. A song such as the Texas border ballad Out in the West Texas Town of El Paso (I Fell in Love with a Mexican Girl) mimics the form of a corrido. The American folk song Frankie and Johnny tells a tale of love, betrayal, murder, and subsequent police involvement, in the same way as a moritat or corrido.

Since a corrido is a folk song, anybody can join in: as the song passes from speaker to speaker, lame verses get dropped and cleverer ones added. The song can change over time to include topics of current interest, such as fashions, social problems, the price of tortilla flour, or revolutions. The combination of do-it-yourself and topicality – the folk song as news source – makes the corrido a bit like the Irish political ballad. Think of Paddy's Lament ('…to America I'd have you not be comin'…) or The Shamrock Shore ('ye brave young sons of Erin's isle, I hope ye will attend awhile…' for about forty verses). Like all these genres, the corrido has a story to tell, and every singer gets in on the act.

La Cucaracha is a very old corrido. It dates back to the 15th Century in Spain, where the original song was probably learned from Arab sailors during the period of the Reconquista, or reconquest of Spain from the Moors. Back in those days, the cockroach was not smoking marijuana – she couldn't travel because her back legs were missing, poor thing. Folk songs like these often have verses that exhibit wit and wisdom.

A Brief History of the Politics in La Cucaracha

In terms of the modern country, Mexico began life as a Spanish colony3. Nueva España once extended over the territory now known as Mexico as well as about a quarter of the present-day continental United States. During the Napoleonic Wars, changes in the Spanish government so displeased the conservative elite of Nueva España that they declared independence. The resulting republic, though promising, was plagued by dissension, a situation which left the new country vulnerable to predation by a land-hungry northern neighbour. After the Texas independence movement had torn a province away from the mother state, the resulting 1845 war with the US cost Mexico two-thirds of its territory – including California. Although the Treaty of Guadalupe Hidalgo was supposed to guarantee citizenship and property rights for former citizens of Nueva España, the treaty went largely unhonoured. Thousands lost their country, their lands, and their cultural environment, all at once.

Relations with the US did not improve after that. In the early 20th Century, imperialism was not a term of insult, but an official and popular policy of US and European politicians4. US politicians and businessmen in particular viewed the territory south of the Rio Grande as a promising source of raw materials and cheap labour with which to build America's economic empire. To ensure that this situation continued, US diplomats and captains of industry supported agreeable Mexican leaders. This was part of the policy known as Dollar Diplomacy.

In 1910, revolution broke out in Mexico, fueled partly by disgust at American business exploitation, but largely because people had finally had enough of Porfirio Díaz, the dictator who had ruled Mexico for 31 years and refused to retire until forced out of office. The revolution quickly turned into a civil war, with the US backing whichever leader it thought most advantageous to US interests. In 1913 American diplomats conspired to remove Mexican president Madero from power and supported the coup d'etat of Victoriano Huerta. For years after this, guerrilla leaders Pancho Villa and Emiliano Zapata continued to fight against the Huerta regime. The US lent military aid in the fight against Villa – US Army General John 'Black Jack' Pershing5 had to be called away from his pursuit (on horseback) of the guerrilla leader in 1917 because his country needed him more urgently to go and fight the Germans.

Pancho Villa was the Robin Hood of Mexican imagination. Many, many tales are told, mostly affectionate, of a man with the common touch, an endearing romanticism, a penchant for the ladies, and a sense of honour. Villa's followers were country people. They sang folk songs. They made up their own verses, too, which is why La Cucaracha has Zapatista verses and verses about Pancho Villa:

A do-it-yourself corrido still has something to teach about history, and can make us laugh.

Listen to the tune of La Cucaracha, here in the traditional US car horn version.

The do-it-yourself quality of La Cucaracha leads to new versions with updated lyrics. The drug reference is usually left out.

No matter how authentically Mexican it sounds, 'La Cucaracha' is not recommended as the name for a restaurant.

1It is interesting to speculate what might happen at the Olympics if Yorkshire were to secede from the UK, and a Yorkshireman actually win an event.2An example of the moritat or murder ballad is Mack the Knife.3There was, of course, a thriving civilisation there before the Spanish arrived. It was called the Aztec culture.4Imperialism was popular in the US and Europe, that is. It was less popular in Africa, India, Latin America, and Asia.5Pershing missiles were named in honour of General Pershing.