Howth Cliff Walk and the Bog of Frogs Content from the guide to life, the universe and everything 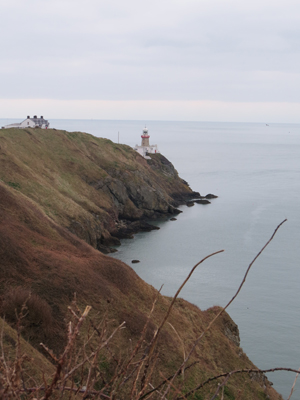 Howth is a large rocky peninsula to the north of Dublin, only about 15km (9 miles) from the city centre. While some of it has become a rather up-market suburb of Dublin, there is still a lot of undeveloped land, with wild heath, rocky coastline and some woodland. There are a number of marked walking trails around Howth. All of these start from the train station in the village of Howth which is on the north side of the peninsula. This entry describes the longest of these trails, the Purple Cliff Walk Trail 2D which is known in much of the documentation as the Bog of Frogs Loop.

The route is 12.5km (7.8 miles) long and should take about 3½ to 4 hours including plenty of stops to admire the spectacular views. The trail is rough underfoot and involves some climbing up steps so it is not suitable for wheelchairs or people who are unsteady on their feet. Suitable footwear would be runners/sneakers or hiking boots. There are many sections of the trail where there are steep cliffs just beside the path - it is therefore not suitable for small children unless they are particularly well behaved and careful.

Howth village can be reached by car, bus or train. There's free parking at weekends around the harbour, but be warned, this is a very popular destination for day-trippers at the weekend, particularly in the summer. If you're not there before 10am, all the free spaces will be gone. There can be queues of cars literally miles long into the village and you may be stuck in the queue for up to an hour, only to find nowhere to park when you get there. You won't have the parking problem if you arrive by bus, but you will still have to endure the traffic queues.

The best way to Howth, therefore, is by train. The Dublin suburban railway known as the DART1 has a service into Howth (which is the terminus) from the centre of Dublin and from anywhere along the east coast. Trains are not particularly frequent at weekends, being only once an hour on Sunday mornings for example, so you should check the timetable and be sure not to miss your train.

The village is a pretty one clustered around the harbour. It is one of the main fishing ports of Ireland so there are plenty of restaurants serving fish, and lots of other restaurants with just about any sort of food imaginable as well as many good coffee shops. Frequently there are festivals on the green beside the harbour at weekends in the summer. 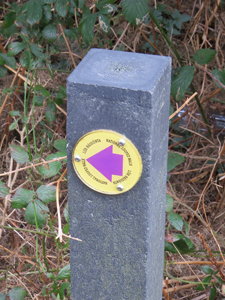 All distances are given here from the start of the route, at the DART station. If you have a smartphone that can measure the distance you've walked, it will help in following these instructions.

The first part of the route is along roads. Once the trail leaves the road, it is marked by posts with a purple arrow on them. Note that there are other trails around Howth which are marked on the same posts but with different coloured arrows.

The purple arrows are positioned for doing the loop in the way it is presented here, in a clockwise direction; they only point in this direction. If you want to do the trail in reverse, you will have to navigate yourself. The posts will tell you that you are on the trail but won't indicate which way you should go. 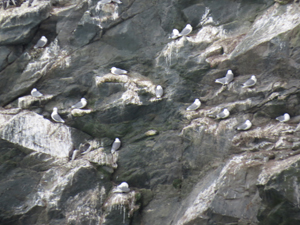 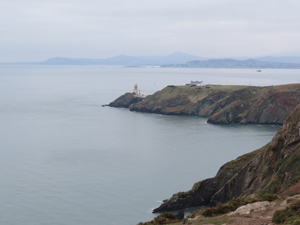 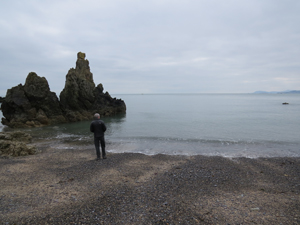 There are plenty of places to get refreshments in the village, including a good market almost immediately on your right.