A Transylvanian Abroad: Domjen, Franklin, and the Travelling Electrical Show Content from the guide to life, the universe and everything 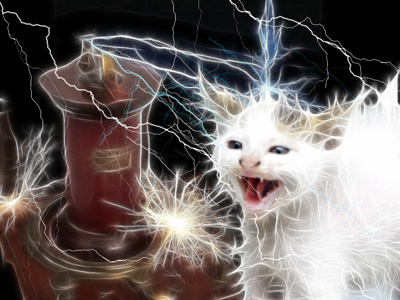 The mid-18th Century was an exciting time for science fans. People were curious about new ideas, such as electricity. They even had 'electricity parties' – gatherings where science buffs did parlour tricks with the spooky stuff, such as annoying cats by making their fur shoot sparks. They played around with Leyden jars1. Of course, there was the ever-popular 'electric kiss', where you electrified a couple through static or by making them hold a hot wire, and then giggled when the osculation resulted in visible sparks. All in all, electricity was the cool fad.

In North America, Ben Franklin, terror of the Enlightenment, was responsible for spreading the trend. In the 1740s, he gave all his friends glass rods and instructions. Franklin even played practical jokes with electricity, creating a fake spider that was moved by a nearby electrical source. (Franklin was fun at parties.) Of course, unlike most faddists, Franklin went on to do serious experimentation, such as electrocuting turkeys to make them tender and standing out in rainstorms with kites (1752). But even before that, Franklin was the go-to guy for electrical fun and games.

Which explains what a Transylvanian was doing in Philadelphia in 1747.

Father Samuel Domjen2 left Transylvania sometime in the 1740s. As he later told Benjamin Franklin, Domjen had a plan: he was going to travel around the world. And he intended to earn his way.

After travelling through Germany, France and the Netherlands, Domjen went to England, where he stayed awhile at Oxford. We know this because when he came to America in 1747, he carried with him an affidavit from Euseby Isham, vice-chancellor of Oxford, attesting to his good character. (People were probably nervous of strangely accented foreigners back then.) Landing in Maryland, Domjen went to New England for a bit, then travelled down to Philadelphia where he met Ben Franklin. Domjen had a request for the New World's top philosophe: he wanted Franklin to teach him the electrical tricks, because he needed a portable trade.

Apparently, Franklin was happy to teach Domjen the experiments. Franklin himself had first learned about electricity from a Scottish clergyman, scientist, and fellow Freemason, Dr Archibald Spencer, who did his 'Watch Mr Wizard' performances in 1743. It was quite respectable in those days – all the best scientists were doing it. So Domjen learned all about Leyden jars and the electric kiss and such, and prepared to entertain the curious.

Who was Father Domjen? Franklin, who is our only real witness, says he was a 'priest of the Greek church', by which we assume he was Orthodox, and that he was a 'Transylvanian Tartar'. The Transylvanian Tartars (also called Tatars) were a small ethnic group descended from Crimean troops who served the invading Turks in the 17th Century. We don't know much more about him other than that he was a very clever man, and good at languages. Franklin says that he 'spoke and wrote Latin very readily and correctly', but that his English was broken.

We do get the impression that the two scientific men got along quite well, and that Franklin had some long talks with Domjen about different topics. Later, Franklin mentioned Domjen in a letter:

We had here some years since a Transylvanian Tartar, who had travelled much in the East, and came hither merely to see the West, intending to go home through the Spanish West Indies, China, &C. He asked me one day, what I thought might be the reason, that so many and such numerous nations, as the Tartars in Europe and Asia, the Indians in America, and the Negroes in Africa, continued a wandering, careless life, and refused to live in cities, and cultivate the arts they saw practised by the civilized parts of mankind? While I was considering what answer to make him he said, in his broken English, 'God make man for Paradise. He make him for live lazy. Man make God angry. God turn him out of Paradise, and bid workee. Man no love workee; he want to go to Paradise again; he want to live lazy. So all mankind love lazy.'
– Franklin to Peter Collinson, Philadelphia, 9 May, 1753.

What did Franklin think of Domjen? He must have been intrigued by Domjen's plan to travel around the world, which he called 'a strange project'. But he also referred to the Transylvania explorer as 'a very singular character'. We can take that any way we like: it's like saying, 'Well, he's definitely unique.'

In spring of 1748, Father Domjen headed south through Maryland, Virginia, and the Carolinas to the city of Charleston, where he took up residence for a time. According to Franklin, 'He [Domjen] wrote to me from Charleston, that he lived eight hundred miles upon electricity; it had been meat, drink, and cloathing to him.' So the lessons paid off.

Electricity worked for him in Charleston, too. There's an advert by Domjen in the South Carolina Gazette of 31 October, 1748. According to the Gazette, the good Father will be at Mr Blythe's Tavern on Broad Street on Wednesday and Friday from 3-5 pm. On payment of two shillings each, people could see the electrical demonstrations and 'also may be electrified if they please3.' Domjen also offered to do private demonstrations in homes. He seems to have given his last presentation on Boxing Day, 1748, and to have left for the West Indies in early 1749.

From there, alas, the trail is not long. Franklin, and we, lose sight of him in Jamaica.

What Happened to Father Domjen?

This is what Franklin wrote his Charleston friend, Dr Lining:

His last letter to me was, I think, from Jamaica, desiring me to send the tubes you mention, to meet him at the Havana, from whence he expected to get a passage to La Vera Cruz; designed travelling over land through Mexico to Acapulco; thence to get a passage to Manilla, and so through China, India, and Persia, home to his own country; proposing to support himself chiefly by electricity. A strange project! But he was, as you observe, a very singular character. I was sorry the tubes did not get to the Havana in time for him. If they are still in being, please to send for them, and accept of them. What became of him afterwards, I have never heard. He promised to write to me as often as he could on his journey, and as soon as he should get home after finishing his tour. It is now seven years since he was here. If he is still in New Spain, as you imagine from that loose report, I suppose it must be that they confine him there, and prevent his writing; but I think it more likely that he may be dead.
– Franklin to John Lining, Philadelphia, 18 March, 1755.

How far around the world did Samuel Domjen get? It seems that he at least made it to Manila in the Philippines. Unfortunately, we have no more clue than Franklin did. The travelling Transylvanian just drops off the map. We could wish that he'd made it back to the Carpathians. We could really wish that he'd left us a journal. It must have been a fascinating journey, full of unexpected meetings, hardships, dangers, and probably a few joys. (More than a few, we hope.)

It's amazing where curiosity will take some people.

1An early form of capacitor invented by Ewald von Kleist in 1745.2People who talk about this man refer to him severally as 'Samuel Damien', 'Samuel Domian', and 'Samuel Dömjén'. We'll stick to 'Samuel Domjen' because that appears to be the name he advertised under in Charleston, South Carolina, in 1748.3Edward McCrady, The History of South Carolina Under the Royal Government, 1719-1776. 1899, p.492.