Wrestling Jacob: Smash Hit of 1742 Content from the guide to life, the universe and everything 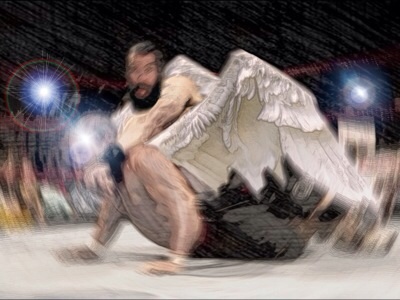 Tell me Thy name, and tell me now1.

The word 'enthusiasm' has a chequered history. In 1650, it was a pejorative term, and at one time, calling somebody 'enthusiastic' was as bad as labelling him or her a communist would have been in the 1950s. Ενθουσιασμος in Greek means 'possession by a god'. That sort of carry-on might be fine for the Dionysian revels, but Puritans took a dim view of such, hence the negative use of the 'e-word' back in their day. But 18th-Century English Christians were more... well, enthusiastic about the Holy Spirit. They sang a lot. With gusto and enthusiasm. In fact, they sang so frankly and enthusiastically that they embarrassed their grandchildren. The 19th Century spent a lot of time and energy censoring the effusions of William Cowper2, Isaac Watts3, and Charles Wesley. Watts and Wesley wrote a great deal of Noncomformists' hymnals, so it wasn't an easy task to tame all that enthusiasm. Victorians partly accomplished it by blue-pencilling the more cringe-worthy bits, and partly by giving the extravagant lyrics some really boring tunes.

Wesley and Watts wanted people to wake up and sense the divine. They wanted them to use music for supernatural encounters. In other words, they were what we now call charismatic. Which rather surprises us when we look at their portraits – who would expect this kind of emotional openness from berobed white men who sported wigs? From their peculiar brand of contagious enthusiasm, you would expect tie-dyed t-shirts and hippie bandannas.

Wesley's massive repertoire of over 6,000 songs was influential, but the song Watts admired most isn't that well-known today. Watts liked this song so much he said it was worth all the verses he himself had ever written. It's called Wrestling Jacob, and it's a magical mystery tour in itself.

And Jacob was left alone; and there wrestled a man with him until the breaking of the day.
And when he saw that he prevailed not against him, he touched the hollow of his thigh; and the hollow of Jacob's thigh was out of joint, as he wrestled with him.
And he said, Let me go, for the day breaketh. And he said, I will not let thee go, except thou bless me.
And he said unto him, What is thy name? And he said, Jacob.
And he said, Thy name shall be called no more Jacob, but Israel: for as a prince hast thou power with God and with men, and hast prevailed.
And Jacob asked him, and said, Tell me, I pray thee, thy name. And he said, Wherefore is it that thou dost ask after my name? And he blessed him there.
And Jacob called the name of the place Peniel: for I have seen God face to face, and my life is preserved.
And as he passed over Penuel4 the sun rose upon him, and he halted upon his thigh.
– Genesis 32:24-31, Authorised Version.

The Genesis account of Jacob is part of one of the world's oldest family sagas, a detail-rich account of ambition, loyalty, romance, betrayal and dynasty-building. As literature, it could be classed as 'magical realism' alongside the works of Gabriel García Márquez and Jorge Luis Borges. In chapter 32, Jacob, who has lived long in exile because of his betrayal of his brother Esau, returns – not without trepidation – to the land of his birth. After dispatching a large amount of loot to Esau as a peace offering, Jacob sends his retainers and family on ahead, and sleeps alone for a night under the stars. This is a significant part of the tale: on his way out of Canaan, Jacob – then alone, friendless, and in terror for his life – had experienced his famous ladder-to-Heaven vision. On his return journey, Jacob symbolically divests himself of his gains and invites the supernatural encounter once more.

The 'man' who wrestles with Jacob all night is generally understood to be an angel, a divine messenger. The angel has the power to change Jacob's identity – to give him a new name. Instead of being Jacob, the Usurper, he is now Israel, the Prince with God. The story of Jacob the Wrestler is an esoteric parable about the struggle of consciousness to grasp transcendent realities. It is only by abandoning self-definition and the reliance on material success that the individual can come to grips with higher truth. Even then, it takes tenacity, the kind of dogged persistence shown by Jacob as he grapples with the angel.

Jacob's Ladder is about wonder: the heavens open. Wrestling Jacob is about the struggle for spiritual growth. This is the story that became the subject of Wesley's enthusiastic hit song.

Puritans and other Calvinists wanted Christians to sing only versified Psalms. Isaac Watts opined that Psalms were all well and good, as long as they'd give them tunes that made them sound as if a genius like David   might have sung them. Watts and Wesley were much more like David when it came to writing poetry: their hymns were as highly personal as the Psalms themselves. And they were influenced by popular music of their time – think the bodhrán-wielding crowd at the folk club of a Friday night. Wrestling Jacob, which like any self-respecting folk song runs to around 14 verses, begins by identifying with the situation of Jacob in the story:

Come, O thou Traveler unknown,
Whom still I hold, but cannot see!
My company before is gone,
And I am left alone with Thee;
With Thee all night I mean to stay,
And wrestle till the break of day.

I need not tell Thee who I am,
My misery and sin declare;
Thyself hast called me by my name,
Look on Thy hands, and read it there;
But who, I ask Thee, who art Thou?
Tell me Thy name, and tell me now.

The song goes on for several stanzas' worth of wrestling. The singer wrestles with an unknown, supernatural man. He wants to know the man's name. The man won't give it. But we get hints in each stanza...

Art Thou the Man that died for me?...
Wilt Thou not yet to me reveal/Thy new, unutterable Name?...
I shall with the God-man prevail...

Just like the audience of a well-told but familiar epic, we savour the anticipation built up by the slow-burn reveal here. After a few verses, we're pretty sure we know who the Mysterious Stranger is supposed to be. And we enjoy the full reveal:

I know Thee, Saviour, who Thou art.
Jesus, the feeble sinner's friend;
Nor wilt Thou with the night depart.
But stay and love me to the end,
Thy mercies never shall remove;
Thy nature and Thy Name is Love.

The Sun of righteousness on me
Hath rose with healing in His wings,
Withered my nature's strength; from Thee
My soul its life and succour brings;
My help is all laid up above;
Thy nature and Thy Name is Love.

Finally, the narrator is empowered by the encounter, and goes away happy:

Lame as I am, I take the prey,
Hell, earth, and sin, with ease o'ercome;
I leap for joy, pursue my way,
And as a bounding hart fly home,
Through all eternity to prove
Thy nature and Thy Name is Love.

How well does this song work as a dramatic exercise? As the 19th-Century tamers of enthusiasm knew, it depends on how you set it to music. This Scottish melody keeps things nice and quiet. We expect Jacob and the angel to have a nice sit-down over tea and scones with the Dominie5.

Wake up and listen to Maddy Prior singing the Sacred Harp tune 'Vernon'. This not only gets our ears out of the church pew (and away from the soporific spell of that organ), but it brings out the dramatic effect that Wesley intended and Watts so admired. This tune takes us out into that starlit, lonely desert. We're almost ready for an otherworldly encounter.

But wait... musical enthusiasts can, perhaps, go farther than even Wesley or Watts dreamed, although we might have suspicions about Cowper. Back in 1735, Charles Wesley went to Georgia Colony at the behest of its founder James Oglethorpe. He had a hard time, getting sick and being shot at, and even Oglethorpe didn't take to him for some reason. He might not have been ready for this Appalachian mountain version of Come O Thou Traveller Unknown, but it is purely in the spirit of the words... a cry from the soul.

Which is the point of the song. Now, what were you saying about how boring old music is? It might be possible to get enthusiastic about some of these old hymns.

1These and all quotes hereafter from Charles Wesley's hymn Wrestling Jacob.2Who was hospitalised with mental issues, but who wrote that 'God is his own interpreter'.3Who made people squirm with lines such as 'would he devote that sacred head for such a worm as I?'4Scholars are still arguing about the name change between verses. We have no guess.5Scottish for schoolmaster or pastor.