Getting a Meal on the Table on Time Content from the guide to life, the universe and everything 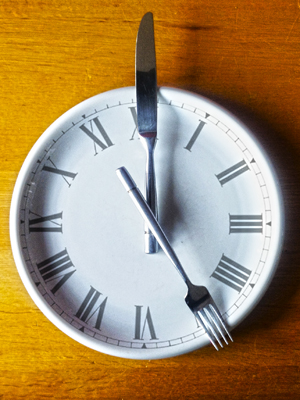 Whether we live in a family unit, share a flat with others, or even occupy a corridor in a student hall of residence, most people would agree that a communal meal is an enjoyable way to spend time together, and has many other advantages. Cooking a larger quantity is inevitably more economical than cooking many individual portions, and it is a chance to demonstrate your favourite recipes, or to try out other people's cooking. This needs some organisation, however, and one of the main aims should be to have everything ready at the agreed time, so that participants can plan their day and will see the communal lunch, dinner, breakfast or tea as a welcome break, rather than coming to the table frustrated because they have had to interrupt whatever they were doing at the whim of the cook.

The following tips apply, of course, just as much if you are cooking for invited guests.

The main idea is that everyone comes to the table at the appointed time, the food is ready, the cook is not flustered, red in the face or full of apologies, and the kitchen is not too untidy, with nothing but a small pile of washing up ready to be seen to afterwards. Other laudable aims when preparing food are: saving energy, saving money and minimising waste.

Here are some thoughts on organising such an event.

Once a sit-down time and the menu have been agreed upon and everybody is informed, take five minutes to note down roughly the jobs that will need doing. The job that will take the longest should obviously be started first. Then work out which is the second longest, and so on. Some tasks are subject to being done in a certain order - you can't boil vegetables until they're peeled and chopped, for example! This should give an idea of how long the preparation will take, and you can now work out what time you should start rolling your sleeves up. Add five to ten minutes to allow for contingencies, such as spillages, phone calls, or food taking longer to cook than anticipated.

Unless the meal involves something that will take several hours in the slow cooker, or a large roast which may take a couple of hours in the oven, such as Roast Suckling Pig1, start by making the dessert. If this is to be served cold, it can sit in the fridge until the main course is cleared away, and conjured up with no further hassle.

However, even before you start preparing the dessert, lay the table. This may sound like a 1950s housewife sort of thing to do, but it can be annoying having to shove books, newspapers or other odds and ends off the table with your elbow when you arrive with a steaming dish of delicious soup or stew, only then to watch the food cool down while you start to collect together knives, forks and plates and lay the table. Also, you will signal to the other eaters that the table is now not to be used for other purposes and dinner is seriously on its way.

An example for such a time schedule:

A roast and two veg, followed by apple crumble and custard, to be on the table at 1.00pm:

For a very detailed example, see our Entry on Roast Pheasant.

Now that you have written your list, laid the table, and checked you have all the ingredients and implements required, wash your hands and off you go!

But not all meals are as simple as that, and sometimes things take longer than you expect. How can we prepare for delays, and how can we save time to counteract them?

If you are following a recipe to impress your family/guests/friends with, or simply because you're not sure of a part of the procedure, be sure to read the recipe right through before you start. Again - an unnecessary precaution? There could well be time traps hidden in the text. Possibly even among the delicious recipes here on H2G2.

Even if you have allowed for a few setbacks and included a ten-minute buffer in your time schedule, it is useful to have a few ideas to hand which will save you some time. Let's deal with the cases mentioned above first:

And here are some more general suggestions:

Your greatest potential time-'waster' is the danger of injury, breakages or spills. Don't take risks! At all times in the kitchen, do all you can to prevent any accidents or spillages - these are all potential hold-ups, which, at worst, will incapacitate the victim and put a complete stop to the meal.

Silly Little Jobs that You Suddenly Can't be Bothered to Do

You may have planned some little touches that you leave out at the last minute because these involve an extra effort. Worse still, you might simply forget them. Do these before you start, or very early on in the proceedings when you still have plenty of time ahead of you. These could include:

Despite all the warnings given above, cooking a meal should be a relaxed, enjoyable affair. Don't worry about little setbacks - finding ways around them is a challenge for your creative instincts. Have a glass of wine or a cup of coffee on hand, take a sip between jobs; create a party atmosphere in the kitchen with background music; enjoy the smells and tastes of the wonderful food! In a relaxed atmosphere, things are less likely to go wrong, and hold-ups are less likely to happen.

While you're chopping, snipping, peeling and frying, think about how you can save time for the next meal. Many main dishes start with frying onions. So fry double, or treble the amount, pack them away in the fridge, and you've knocked the first five minutes off the preparation for tomorrow evening's stew.

Similarly, if rice is on the menu for today and the day after tomorrow you expect to be making a curry5, you could boil up double the amount now and put half in the fridge ready for that next meal6.

Once everyone is sitting and eating, there should be no need for anyone to leave the table to fetch condiments or drinks. It'll be thanks to your organisation that the family or group can enjoy an undisturbed meal. If the cook can sit serenely at the table with no signs of having 'slaved over a hot stove', the atmosphere will be conducive to pleasant conversation and everyone will want to repeat the experience!

1In which case, you would get that cooking first.2Also known as a double boiler - A pan-in-a-pan construction, with boiling water in the lower pan, which keeps the contents of the inner pan warm but off the boil, often used for delicate egg dishes such as zabaglione or egg-based sauces, eg hollandaise or bernaise.3On the other hand - have no scruples about shooing people out of the kitchen who aren't helping or when it gets overcrowded.4The juices of oven roast meat.5Another curry idea here.6Remember to reheat the rice thoroughly to destroy any bacteria that may have found it in the fridge.