Cheese Footballs Content from the guide to life, the universe and everything 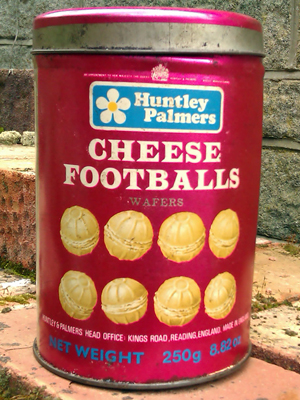 If you ever hoovered up after a 1970s cocktail party, you'll know all about the cheese football. Its spherical shape and light weight ensured that any inadvertently dropped on to a deep pile carpet would happily bounce and roll for a considerable distance, typically finding refuge under the sofa. Twiglets and crisps, on the other hand, cannot compete with such dropped-snack athleticism, and are more likely to remain in the vicinity until crushed by a partygoer's shoe.

The party in question would need to have been thrown during the Christmas/New Year period. Not that this has any influence on the physics; just that this is the time the snack appears in the shops. If you can find them at all these days, the supermarket or off-licence are most likely to stock them.

Like most foodstuffs designed to accompany alcohol, cheese footballs have little stand-alone nutritional merit. Each is a small beige-coloured savoury wafer biscuit surrounding a central plug of dryish, cheesyish paste. They're just one of those moreish snacks that we could happily crunch through an entire large tub of, if we thought nobody was watching, and if we were oblivious to the calorific content.

The addition of alcohol also helps remove any inhibitions while playing the postprandial game of 'blow cheese football'. The dinner table is cleared, save for two cruet sets to serve as a goal at each end. The cheese football is propelled by means of blowing at it through a drinking straw. The rules are loosely those of football, although local variants are required for situations such as where a player chooses to eat the football mid-game.

The cheese football's origins aren't entirely clear. A product of Huntley & Palmers, the great English biscuit company, they were made in their Reading factory from the early years of the 20th Century. Originally called 'Football Wafers', they were renamed in the 1960s. One of the most distinguishing features of this company's products were the lavishly decorated tins, which were exported around the globe, and which have become very collectable in recent years.

Mergers with Peek Frean in 1921 and Jacobs in 1960 formed Associated Biscuits, which was in turn snaffled up by the American Nabisco in 1979. The Associated brands were then sold to the French food giant Danone ten years later. In 2004 they were British again, bought by United Biscuits, home of the McVitie's Digestive. One Researcher writes:

I worked for a brief and educative time on the production lines for McVities in Stockport. I can testify that in the nameless labyrinths of the second floor, the cheesy filling for TUC biscuits and, yes, for cheese footballs, was mixed in very large buckets, involving the scientific admixture of cheese powder, water, milk and permitted additives, with garden spades. Yes, exactly the same sort of high-tech device you'd use in the garden for moving earth. And the powder had a smell that can only be described as concentrated hamster cage and old unwashed feet. You had to be there to truly appreciate the nasal bouquet.

These days, cheese footballs carry the Jacob's brand, and the decorative tins are long gone. In 2012 they were sold again, this time to a German company, Intersnack. In cheese as in the leather variety of football, Germany usually wins out over England in the end.