Pan Yan Pickle Content from the guide to life, the universe and everything 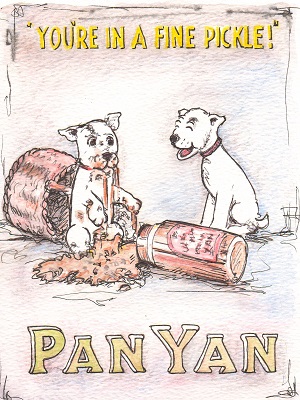 On the evening of 26 October, 2004, workers at the Premier Foods pickle factory in Bury St Edmunds clocked off after the day shift. Around 40 staff were still on site in the early hours of the following morning when a fire broke out in a covered walkway. Halogen lights are believed to have ignited the packaging around bottles stored on wooden pallets.

The first fire engine arrived within five minutes but the blaze spread rapidly. It took 25 engines and 150 firefighters 24 hours to get the situation under control.

The damage to the plant was extensive. Production of Branston Pickle, the UK's leading brand of relish1, was halted only a few weeks before the busy Christmas period. Supermarket shelves rapidly emptied and panic buying took hold as jars were exchanged over the Internet for up to £100 each. Premier Foods staff faced a race against time to get the operation restarted, but their hard work paid off and one month later Branston Pickle began rolling off the production line once again. Traditional British Christmas suppers of cold turkey with a garnish of Branston Pickle were saved.

Yet, among all the congratulations, one casualty was overlooked. The fire had destroyed paper files containing the secret formula for another favourite brand: Pan Yan Pickle.

Pan Yan Pickle was invented in 1907, a product of the Maconochie Brothers grocery business which, despite its Scottish-sounding name, had been founded in 1873 at Lowestoft in Suffolk. In the latter years of the 19th Century they supplied all manner of fine foodstuffs to London's grocers. High-class preserves, potted meats and bottled fruits were their specialities, and Queen Victoria was a declared fan.

Maconochie also sold products at the opposite end of the epicurean scale. They were contracted to supply ration packs to the British Army during the Boer War and both World Wars. 'Maconochie' was Tommy's2 nickname for the tins of either meat or vegetables in gravy. By most accounts it tasted pretty foul even when warmed up, but it did at least offer an alternative to bully beef3.

From 1895, Maconochie Brothers occupied premises on the Isle of Dogs - one of those loops of the River Thames in the East End of London - and it was here that they built their pickle factory4. Pan Yan was a sweet pickle based on apples, but having a distinctively spicy kick. Other ingredients included swede, spirit vinegar, gherkins, pepper, sugar, carrots and onions.

Needing an exotic oriental brand name, 'Pan Yan' was the winning entry in an employee competition.

Buoyed by newspaper advertising, the brand became the company's best seller and enjoyed almost six decades of consistently strong sales, but disaster struck in the 1960s. Maconochie Brothers was by then a subsidiary firm of HS Whiteside, who suffered a financial scandal in 1964 when auditors discovered they had overstated profits by almost £1 million, covering up what was a massive loss. Following a long Board of Trade inquiry, administrators sold off HS Whiteside subsidiaries Maconochie Brothers and Sun Pat5 to confectionery firm Rowntree Mackintosh in 1967.

Rowntree's managed the brand until 1988, when they were acquired by food giant Nestlé. This deal brought Pan Yan into the same stable as Branston Pickle, which Nestlé had owned since acquiring Crosse & Blackwell in 1960.

Sales of Pan Yan steadily declined over the next decade, and when both pickle brands were sold off to Premier Foods in 2002, production of Pan Yan was discontinued.

No mention was made at the time of the loss of Pan Yan's secret formula in the 2004 fire, but four years later the BBC Radio 2 Breakfast Show DJ Chris Evans fronted a listeners' campaign to get the Pan Yan brand reinstated. People were encouraged to turn out their cupboards and hunt down any old jars so that the recipe might be reconstructed. Ingredients lists and even pickle samples were found and sent to Premier Foods in the hope they could relaunch it.

The campaign died almost as rapidly as it began, however, and despite a jar or two being discovered in pantries and garden sheds, no Pan Yan relaunch was forthcoming. The final nail in the coffin would seem to have come in 2012, when the loss-making Premier Foods offloaded Branston to the Japanese vinegar producer Mizkan, although attempts at recreating Pan Yan have been made, and a simple web search will uncover speculative recipes posted on food blogs around the Internet

If there's a moral to this story, it's the inevitability that the brands we grow up with, which in many cases form a backdrop to our lives, won't be there for ever. Not only do we lose them to changing fashions, but also to the machinations of big business. Had Maconochie remained a family firm, the brand may well have survived for as long as there was a Pan Yan dynasty.

There might be a happy ending for Pan Yan lovers, however. In June 2013, Cranfields Foods, a small Devon-based manufacturer of home-made jams, preserves and pickles, launched their own version of Pan Yan Pickle. Only time, and a ploughman's lunch or two, will determine how well it stands up to the original.

1Branston Pickle, like Pan Yan Pickle, is a tangy, chutney-style relish, as opposed to a vegetable that's been pickled, such as a gherkin or a pickled onion.2'Tommy Atkins' being the common sobriquet for a British soldier during the first and second World Wars.3Corned beef.4The area today is still known as Maconochie's Wharf, but the pickle works have gone, replaced by riverside housing developments.5Sun Pat has for many years been the UK's leading brand of peanut butter.