Onion and Poppy Seed Bread, the Recipe Content from the guide to life, the universe and everything 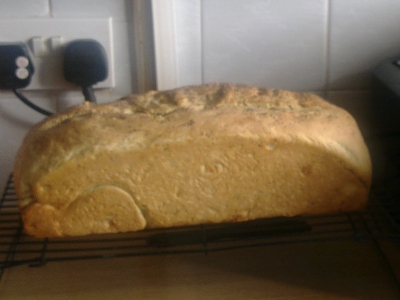 h2g2's bread expert, 2Legs, gives us the benefit of his experience:

This is pretty-much an invented recipe, brought about after various conversations over pints of beer with a friend who has worked as a baker. Developed over a few years, it has hopefully been refined into something which should come out of the oven each time in a fairly predictable and repeatable way. A basic white bread dough is enriched and flavoured with oil, diced fresh onion and poppy seeds, plus dried herbs (oregano works well and is given in this recipe), to produce a very tasty, rich, filling bread, with a slight nutty flavour and which holds its moisture and freshness for a reasonable amount of time. As the flavour of the bread is mainly determined by the onion, poppy seed and dried herbs, it does not require more complicated techniques for increasing flavour, as some recipes such as baguettes may require.

It works well as a sandwich bread for strong-flavoured fillings, especially mature cheeses like cheddar, and is equally delicious toasted with as much butter as one can safely deem acceptable. It also makes rather tasty and filling cheese on toast, toasted cheese or grilled sandwiches, and is an ideal bread for using to soak up soups, stews or anything else one has to hand.

As with all bread recipes, the timings and quantities of liquids are estimates – ambient temperature, humidity etc can affect both the amount of time it takes to rise and also how much total liquid the recipe needs. Similarly, the amount of water contained in the onion can vary and this can affect the overall hydration of the dough. All domestic ovens vary, but do ensure the oven has plenty of time to reach temperature before the bread goes in. This allows for a good oven spring: the period of increased yeast activity in the dough/loaf, brought about by the high oven temperature, which lasts until the yeast is killed in the oven's heat.

Makes one large (approx 800g) loaf, or two smaller (400g/1lb) loaves. It is best cooked in a bread tin; unfortunately, those tins available for domestic use seem to vary widely in their sizing. I cook this in a tin which was advertised as being a '2kg split loaf tin'. With this quantity of dough, even when fully risen/cooked, the loaf only just about reaches the top of the sides of the tin. However, having tried the recipe to produce a higher quantity of dough, this actually produces less favourable results, as it is difficult to maintain an even consistency and texture to such a large loaf in a domestic cooking situation.

Should inspiration run dry now the loaf is cooked and safely cooled on the cooling rack, it might be wise to make a soup to eat with the bread; leek and Stilton works particularly well. You will need an electric blender, of a suitable type/size, for blending this particular soup. Aim for a fairly smooth consistency, but with some texture from the vegetables, and then the texture and flavour from the Stilton cheese itself, added after the cooking and blending of the vegetable quotient of the soup.

One word of warning: if you've made both the soup and the bread, you're probably now really very full up, and not feeling in the mood for doing the washing up.