Chicken Noodle Soup Content from the guide to life, the universe and everything 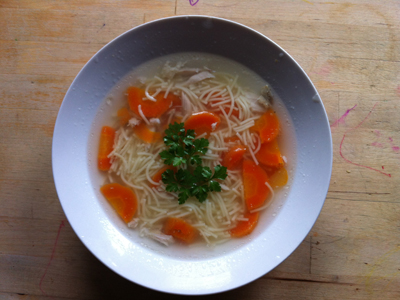 Researcher Solnushka gives us this excellent recipe based on personal experience:

Chicken noodle soup is a legendary foodstuff. Generations of European and American cooks have been force-feeding their loved ones with it at the merest hint of a sniffle, and variations on the theme are also popular in Asian cuisines. It is probably most famous, however, as 'Jewish penicillin' because of the special place the soup has in Jewish cookery; a version of it is a staple at celebratory Passover meals for example1.

Whether or not it actually has any healing properties is debatable, but it is certainly a very nourishing, hot and comforting dish that can be whipped up relatively cheaply out of a few ingredients by people who keep chickens and want to use up every last bit of every last one. In keeping with this tradition, the recipe uses chicken thighs rather than a choicer cut. There's nothing to stop you using chicken breasts if you'd prefer, or going for a huge batch of soup and boiling up a whole (jointed) chicken. You could also add a chicken carcass as well as the fresh chicken meat for a really intense bouillon when making the broth. You really don't need to be too precious. And you certainly do not need to wait until you are ill, either.

You can start by removing the skin from the chicken thighs if you like, although this might defeat the object of making a soup for people who need a bit of feeding up. Wash the thighs, put them in a pan with the water and apply heat.

As it approaches boiling point, some rather skuzzy foam will start to form on the surface. Remove this with a slotted spoon or similar. Keep skimming the surface as the foam appears until it stops forming, or until you get really bored. This will probably take about five minutes or so.

Now add the peeled but otherwise whole onion, the washed and maybe cut-in-half carrots and celery, the peeled but otherwise whole garlic and some roughly-shredded parsley. Cover, bring back to the boil, turn the heat down and then allow it to simmer for quite some time: at least an hour, although it depends on how thick you want the broth. Leaving the lid off and allowing the water content to reduce a bit will also produce a more strongly-flavoured soup.

When you cannot wait any longer, remove the soup from the heat and extract the vegetables5. Throw away the onion and the garlic and, if your family are as fussy as mine, the celery. Chop up the carrots6. Take the skin off the chicken if you haven't already, and remove the meat from the bone7. Put this to one side and add the noodles to the broth. Cook according to the packet instructions.

Alternatively, you can put the soup into the fridge without removing anything and wait until the next day, when any remaining fat will have congealed on the surface. Scoop it out and then proceed as above. You can also throw away all the vegetables used in the preparation of the broth, and start afresh with new carrots and whatnot. You'll need to add them a little in advance of the vermicelli noodles in that case.

Either way, as the noodles near readiness, add the chicken meat and the carrots back into the soup to heat through. Serve immediately, with a sprig of fresh parsley.

1With added dumplings, aka matzo balls.2Feel free to also add other root vegetables like a parsnip or two, some leeks or half a turnip at will.3Some people also add dill. I don't.4Other types of noodles are available.5Tongs will help here.6We like them in rounds rather than julienned, but you can do what you like.7Hot! Hot! Ow!