Cavehill, County Antrim - How the Right to Roam was Won Content from the guide to life, the universe and everything 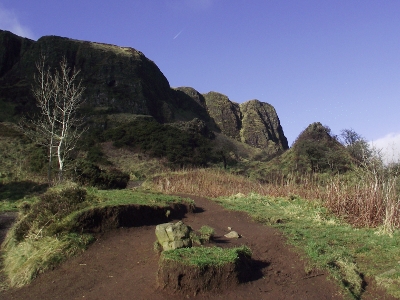 In 1855, the Belfast merchant Joseph Magill may well have felt quite sanguine. His linen trading was doing well; his family owned vast swathes of land across County Antrim; and 'Martlett Towers', his mansion on Cavehill overlooking the city of Belfast, had just been completed. But by the end of the decade, the outlook would be completely different. For Joseph had built his stately home right on top of a public footpath which the people of Belfast had used since time beyond memory, and they weren't in any mood to take it lying down.

The Association for the Protection of Public Rights of Way took up the case. They secured the support of the city's two Members of Parliament, the Lord Mayor, and almost unanimous backing of the city's population, and by 1858 they had raised the funds to bring a successful court case against him for obstructing a public right of way, which he appealed the following year.

The make-or-break point of the case against Magill was whether he had built over a right of way which had remained in constant use. He argued that there was none. Yes, he said, of course people had used the path. But the only people who had used it had been vetted by him personally. Only respectable people had had access, and then only with his specific permission.

Martlett Towers may have been built on first-rate Antrim basalt, but this argument had much shakier foundations, and the prosecution began to undermine them with gusto.

Magill was making a very big claim. There is evidence for human habitation on Cavehill1 going back millennia. Remains of dwellings, jewellery, houses and pottery have established human activity on the mountain going back to the Bronze Age. Magill's prosecutors, of course, did not have the benefit of modern archaeological discoveries. What they did have, though, was oral history - and plenty of it.

Witnesses were called to the stand, and gave evidence of their memory of the public having unfettered access to the path up Cavehill. A picture emerged of the route having been used to carry turf down the mountain for fuel, and by people using it for recreation. Indeed, every Easter Monday a fair had been held in the 'Devil's Punchbowl' - a hollow below the summit - where cattle were traded, dances were held, fiddles and pipes got an airing and drink was plentiful. This flew in the face of the case Magill was trying to make, that only a select few of the respectable class had ever used the route.

The prosecution also had a potent symbol in the 'Volunteer Well'2. The Volunteers, Belfast's radical militia of the late 18th Century, had used the hill for manoeuvres, and the well they drank from was now enclosed within Joseph Magill's outbuildings. To certain strata of society, this was no doubt like a red rag to a bull.

The trial lasted for a week, and for that week it was the talking point of the city. Each day, the hearing was full to capacity with members of the public. Appetite for news of the case was so great that The Northern Whig, the leading newspaper of the day, published a transcript of the trial as an 88-page pamphlet. Historians of the period have come to realise the value of the transcript as a historical document. In the mid-19th Century, oral history of the lives of small farmers and labourers wasn't exactly in vogue in academia, so this pamphlet is one of the only documents of its type available.

Witness after witness showed Joseph Magill's case to be untenable. His neighbours turned out to bear an inconvenient testimony. They recalled that many small tenant farmers used to work the land on the hill, scratching out a living by selling the stone from the soil as well as growing crops. Another neighbour remembered that when he moved on to his land, it was so obviously a public footpath that he had even added a stile over his fence to allow people unfettered access. But perhaps the final blow to the case came from another neighbour. Far from only the respectable gentry being allowed up the footpath, he testified that his wife made a pretty penny by selling poitín to the hordes of revellers who made their way up the hill, especially at Easter Fair time.

At the end of the week, the jury took a little over half an hour to come to the unavoidable conclusion. Magill was guilty of obstructing a public right of way.

So that was that. Or not quite. Magill was ordered to pay the substantial costs of the court case and appeal. His fortunes had turned, and by 1875 he was declared bankrupt. His land on Cavehill was swallowed up by the neighbouring Shaftesburys, who were then building Belfast Castle on the side of the hill. Ironically, they did move the traditional right of way some distance to the north - but it remained a right of way. And wiser than Magill, they only blocked the right of way once they had secured a private act of parliament allowing them to do so. Martlett Towers remained, and was used to house the people who worked on the Shaftesbury estate, but after a fire in the 1950s it was demolished.

The story of Magill's demise is part of history, of course, but it's very much part of the present, too. Cavehill is now one of the few upland areas in Northern Ireland where the public enjoy access as a legal right. In 1935, the then-Earl of Shaftesbury gifted Belfast Castle and its grounds to the city of Belfast. Cavehill is now a much-loved country park, run by Belfast City Council. The right of way remains public, and the old traditions continue: every Easter Monday, you'll still find the revellers there as you would have 200 years before. The music's still there, the drink's still there, and the dancing's still there. And while you won't find the cattle market any more, you'll still find plenty of animal life: the zebras, meerkats and penguins of Bellevue Zoo.

1A hill of many names. Among others, you'll find it referred to as Cave Hill, Cavehill, Beann Mhadagáin, Ben Madigan, and McArt's Fort - although strictly speaking that is just the promontory fort at the top.2The Volunteer Well is even marked on the first Ordnance Survey of Ireland. This was conducted over a number of decades, and was completed in 1846, 13 years before the court case.