The Kinder Trespass Content from the guide to life, the universe and everything 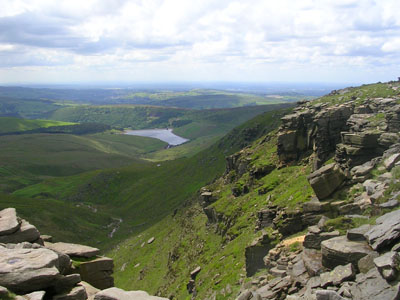 On 24 April, 1932, a large group of protestors deliberately trespassed onto Kinder Scout, a plateau which rises to the height of a mountain in the Peak District of England, as an act of protest against the fact that mountains could be privately owned and access denied to anyone else. It was an important event in the long process which led to the land access rights currently enjoyed in England and Wales1.

At the time, Kinder Scout was only one part of vast land holdings owned by the Duke of Devonshire and was used as a grouse moor for shooting. Access was not permitted to the general public. The Peak District is surrounded by large industrial cities including Sheffield and Manchester and many of the people of these cities were frustrated that they were not allowed to enjoy the beautiful countryside on their doorsteps. If they tried, they could be beaten off by gamekeepers who were employed by the landowners.

The Trespass took place against the backdrop of long attempts to gain access rights to open countryside. James Bryce MP had introduced a 'right to roam' bill in Parliament in 1884 which was defeated. It was reintroduced every year until 1914 and was defeated every time. Ramblers' groups were trying to negotiate for access to private lands but were not having any success with their discussions. The Communist Party was also agitating for better access to the land.

Frustrated by the lack of progress in negotiations, a mass trespass was organised by the communist-leaning British Workers' Sports Federation. There had been other, smaller individual and group trespasses before but this was the first on such a scale.

A group of several hundred protestors gathered at Bowden Bridge near Hayfield where they heard speeches from Trespass leader Benny Rothman, an unemployed 20-year-old mechanic. When they were ready, the group headed up to Kinder Scout, at one point spreading out into a line to make sure that most of the group would make it past the Water Board officials and eight gamekeepers armed with sticks who were arrayed to stop them. According to a contemporary account in The Guardian, there were scuffles and a few injuries, but the group continued on its way towards the highest point of the plateau, the summit of Kinder Scout. At one point they were joined by a smaller contingent of protestors who had arrived from Sheffield and the group all listened to further speeches before returning to their respective starting points.

On their return to Hayfield, the village from which the Manchester contingent had left that day, police arrested Rothman and five other ramblers. They were charged with breach of the peace and unlawful assembly, the latter charge of which was later replaced with riotous assembly, a more serious offence.

The trial was heard at Derby Assizes in front of a jury of military officers and local gentlemen, who, it can be assumed, were not sympathetic to the idea of urban riff-raff trespassing on private land. The judge made sure to point out to the jury that some of the men had been found in possession of a copy of writings of Lenin and a copy of the Daily Worker, unsurprising given the Communist-leanings of the British Workers' Sports Federation, to which they belonged. He also mentioned the immigrant surnames of four of the men and their addresses in a Jewish suburb.

Guilty verdicts were passed after only 40 minutes of deliberations and the men served sentences of up to six months' imprisonment. Rothman said later We were yids and reds and what was worse, red yids, in that judge's eyes, and he made sure the jury knew it.

The Trespass and other protests were part of increasing pressure to allow access to privately-owned countryside. In 1949, the government of the day passed the National Parks and Access to the Countryside Act, which allowed the creation of the National Parks. The Peak District was the first area to be so designated and agreements were quickly reached with landowners to allow access to previously private areas, including Kinder Scout.

In 2000, the Countryside and Rights of Way Act was passed which extended the public's access to the countryside. This was finally fully implemented in 2005. Discussions and debate continue over rights of way but the trespassers of 1932 would surely be very happy to see the current situation.

Perhaps it is appropriate that the last word should go to the 11th Duke of Devonshire, grandson of the 1932 duke, who addressed the gathered crowds at the 70th anniversary of the Trespass as follows:

I am aware that I represent the villain of the piece this afternoon. But over the last 70 years times have changed and it gives me enormous pleasure to welcome walkers to my estate today. The trespass was a great shaming event on my family and the sentences handed down were appalling. But out of great evil can come great good. The trespass was the first event in the whole movement of access to the countryside and the creation of our national parks.

1Scotland has a long tradition of wide-ranging rights of public access to land, while rights in Northern Ireland are quite restricted.