What Is Art? Constantin Brancusi's Bird or Kitchen Utensil Content from the guide to life, the universe and everything 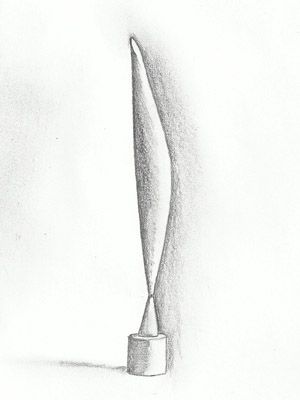 But the Devil whoops, as he whooped of old: 'It's clever, but is it Art?'
–  Rudyard Kipling: Conundrum of the Workshops

The quote above raises a question: What is art? Is it, like pornography, a case of 'I know it when I see it', as US Supreme Court Justice Potter Stewart famously said? Never mind the Supreme Court, does the US Customs Office need to know what art is?

In 1926, it seems that they did. The question of whether Constantin Brâncusi was exporting art or kitchen utensils became a knotty problem for the Customs Court, and a cause for concern (and mirth) in newspapers and among museum curators and art collectors. With the help of some expertise from the redoubtable Marcel Duchamp, the art finally got to the purchaser. But it was an interesting journey.

Who was Constantin Brâncusi, and why was he Making These Things?

Constantin Brâncusi was not born rich, famous, or connected. He grew up in a village in the Carpathian Mountains, where he was sent out to herd sheep at the age of seven. While watching sheep, he carved wood, and he was good at it. Later, in Bucuresti, where he worked for a cabinetmaker, he showed such promise that an industrialist sent him to art school. After graduating from the Bucuresti Art Academy, he moved to Paris in 1904. Paris was where all the aspiring artists from Romania wanted to go – the language was easy for them to learn, and the art influences were lively.

In 1908, Brâncusi made a name for himself by exhibiting a new kind of sculpture. Unlike his early work, which was representational, the new sculptures were abstract or near-abstract works of startling simplicity. In his early period, he carved in stone. The version of 'The Kiss', for example, which is in the Philadelphia Art Museum, is a rectangular block of alvastone. The very simple lines on the stone indicate two figures face to face, with two bands that seem to be arms embracing. The piece is not exactly representational: the viewer's mind fills in the blanks. Although this sort of art may seem commonplace now, it was radical for 1908.

The version in the Philadelphia Art Museum is not the only 'Kiss'. Brâncusi made different versions of that sculpture in different kinds of stone. Some are displayed indoors, some out. It's a popular motif – there are even replicas used as doorstops. The sculptor kept refining his technique and simplifying his form. Other ideas, such as the form of a fish, are carried out in different materials: stone, wood, metal. The sculptures invite you to look, think, and want to touch – although whether you are allowed to depends on the item's owner.

Art aficionados in Paris liked Brâncusi's work. He became successful, and known as a French artist. The only misunderstanding he had, before he ran into US philistinism that is, was in 1920. A version of his sculpture series Princess X met with shock. The sculptor claimed he thought he was carving the head of an anonymous young woman. Parisians thought he was carving something else. The (allegedly?) phallic shape of the bust caused it to be removed from an exhibition. C'est la vie.

When is a Bird not a Bird?

To understand the bird, you need to look at it. Notice that it doesn't have wings. Instead, it is a bird-like shape – elongated, reduced to its curves. The sculpture stands on its end, delicately poised. Brâncusi said he wanted to capture 'the essence of flight'. The viewer will have to decide whether he has done this.

The version of 'Bird'1 in the Metropolitan Museum of Art in New York City is made of marble. Brâncusi made seven marble sculptures in this series. Nine he cast in bronze, each carefully smoothed and polished to an aerodynamic finish.

Brâncusi's bird is not a bird. But it is a bird. That sort of thinking is work – probably more work than the US Customs Office is used to, which is why it took a battery of lawyers (and Marcel Duchamp) to get the birds out of hock in 1926.

In 1926, crateloads of Brâncusi's art arrived in New York, accompanied by that great champion of all things modern, that painter of moustaches on the Mona Lisa, Marcel Duchamp himself. The Brâncusi works were intended for exhibition at the avant-garde Brummer Gallery. Customs officials opened the crates.

They were dumbfounded. Instead of nice paintings of landscapes and statuettes of shepherdesses, what they found were shapes of all kinds: egg-shaped things, disks, long, thin shapes, things made of metal, wood, and marble that defied description in the manual. When they found a particularly offensive long piece of bronze with the title 'Bird in Flight', the custom officials decided they were being conned. This stuff was labelled 'art'. Clearly, it was not art. Someone was committing Customs fraud.

Why did this matter? By US Customs law, art was exempt from import duty. Other things were not. These crates clearly contained other things. Therefore, they were not duty-free.

The custom officials were behaving much like the railway stationmaster in the classic story Pigs is Pigs2. Lacking a category, they used a fallback. After scratching their heads, they dubbed the imports 'manufactured objects of metal', and assessed a duty of $240. End of story.

Marcel Duchamp was outraged. He wasn't letting anybody pay. Moreover, he was going to make sure everybody knew about it. He was ready to go to war for art.

Duchamp, Brâncusi, and Edward Steichen, who had bought 'Bird in Flight', went to court to get the works freed for exhibition. Customs permitted this, temporarily labelling the offending objects as 'kitchen utensils', for reasons best known to themselves. The exhibition was a huge success. The court case, however, was getting complicated.

In 1927 the federal Customs appraiser refused to back down on his assessment that the artist owed the US government $240 for importing faux art. He told the New York Evening Post: 'Several men, high in the art world were asked to express their opinions for the Government... One of them told us, "If that's art, hereafter I'm a bricklayer."' The appraiser had experts on his side.

Okay, said Duchamp, we'll get our own experts. At the appeal trial, two judges heard experts who supported the thesis that 'Bird' was art. Edward Steichen and his lawyers marshalled an impressive array of art experts, including editors, critics, and a museum director. The government turned up with a couple of sculptors who were well thought of at the time, Robert Aitken and Thomas Jones. Brâncusi was nowhere to be seen. A shy man, he was not enjoying all the publicity and went home to Paris.

Exhibit 1 in the case was 'Bird in Flight', which sat patiently on a table as it was alternately described as an 'original sculpture' in the sense of the 1922 Tariff Act, or, well, a kitchen utensil. When Steichen got on the stand, the wrangling over the meaning of art got interesting. The presiding judge, Judge Waite, wanted to know why Steichen would call this piece of sculpture a bird.

Waite: If you saw it in the forest you would not take a shot at it?
Steichen: No, your honor3.

Witnesses for the government were adamant in their statements that this sort of abstract stuff was not real art. Matthew Speiser, one of the lawyers for the artist, grilled Robert Aitken, a then-popular sculptor4:

Speiser: Now, Mr. Aitken would you mind stating why this (Exhibit 1) is not a work of art?
Aitken: First of all I might say it has no beauty.
Speiser: In other words, it aroused no aesthetic emotional reaction in you?
Aitken: Quite no5.

While the modern artists rolled their eyes at all this philistinism, and the newspapers had fun as newspapers will, quoting all this art talk and making mock, the two judges listened carefully as both sides explained why they thought 'Bird in Flight' was, or was not, a piece of art. Steichen explained how long and carefully Brâncusi had worked on each piece. A statement from Brâncusi explained that each work was unique, there was no manufacturing involved. A government witness said that Brâncusi was a wonderful metalworker, but no sculptor. Finally, the judges delivered their decision.

'Bird in Flight' was a work of art in the sense of the Tariff Act.

In his 1928 decision, Judge Waite wrote:

The object now under consideration... is beautiful and symmetrical in outline, and while some difficulty might be encountered in associating it with a bird, it is nevertheless pleasing to look at and highly ornamental, and as we hold under the evidence that it is the original production of a professional sculptor and is in fact a piece of sculpture and a work of art according to the authorities above referred to, we sustain the protest and find that it is entitled to free entry.

So there you have it. Progressive artists = 1, pettifogging bureaucrats = 0.

The result? If you go to the Metropolitan Museum of Art, or any of the other places where Brâncusi's work is exhibited, you can study the objects labelled 'bird', 'fish', 'kiss', or even 'princess', and you can decide for yourself if the sculptor has succeeded in capturing the essence of the thing itself.

But you won't see anything labelled 'kitchen utensil'.

Constantin Brâncusi's work was not limited to small sculptures. His most famous work in Romania is the statue 'Coloana fara sfarsit', or 'Endless Column'. The statue is part of a group to be found with other works of the sculptor at Târgu Jiu.

1The different 'Bird' sculptures have names such as 'Bird in Flight', or 'Bird in Space'.2Pigs is Pigs is by Ellis Parker Butler.3Quotes from Stéphanie Giry, 'An Odd Bird', in Legal Affairs: The Magazine at the Intersection of Law and Life, September/October 2002.4Aitken was no stranger to the US government. He designed the art on the West Pediment of the Supreme Court building, and created the 'Iron Mike' statue at Parris Island, South Carolina. Military statues were a speciality.5Ibid.