How to Make a Hole in the Ice Content from the guide to life, the universe and everything 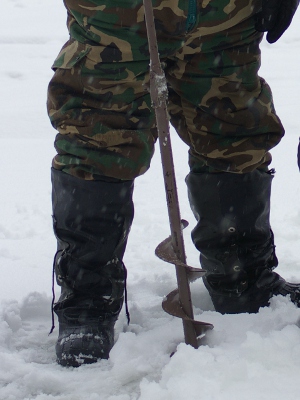 There are many common methods of making a hole in the ice covering lakes/ponds/seas in latitudes and/or altitudes that are cold enough1 for ice to occur.

In regions where it is considered normal to make holes in ice you can buy special ice bores from any hardware store. There are two basic models; one has a small combustion engine attached to it and the other one is operated by turning it manually. The first one is for those who need a lot of holes quickly and the second one is for those who need fewer holes and are not in a hurry. Motorised versions weigh considerably more and are therefore normally used within a short distance from the vehicle. The lower part of the bore looks just like a very large drill bit. A hole made with a bore is normally 10-15 centimetres across. The length of the drill is normally 60-80 centimetres and this is naturally the maximum thickness of the ice it can penetrate. Drilled holes are very good for ice fishing, unless one is fishing with nets when you need two slightly bigger holes.

Both of these weapons can be used to hammer your way through the ice. An ice pick is normally 1 to 1.5 metres long. The upper half is a handle (normally made from wood) and the lower part is a giant chisel. With an ice pick you can cut a hole while standing upright. The same effect can be achieved with an axe, but if you use an axe you have to be on your knees. If the ice is thick this method takes time and energy, but there is no limit to the thickness of ice than can be cut in this fashion. The advantage of this method is that the hole can be freely shaped and sized. Such holes are normally used for winter net fishing or for obtaining water.

Both chainsaws and handsaws can be used for cutting a hole in the ice. If you wish to use a chainsaw, avoid those powered by electricity since water and electricity don't work too well together. Naturally the blade of the saw must be longer than the thickness of the ice. If a handsaw is used, a small starter hole has to be made by some other method. Sawed holes can be of any shape and size. The difficult part in this method is the removal of cut off ice from the hole. It is surprisingly hard to lift heavy and slippery ice blocks from the hole. Splitting the block into smaller bits and pushing these under the ice or lifting them up can solve the problem. Sawed holes are very good for swimming in since the edges are nice and smooth.

If you are going to use explosives, a small hole (it doesn't need to go all the way though) is needed to put the charge in. If the explosive is just left on top of the ice much more of the blasting agent is needed. It should be made sure that the hole made is big enough for the charge to fit in. The amount of the explosive needed depends on the thickness and strength of the ice. Local legislation concerning explosives and their use for making holes in the ice should be checked. It can be illegal since it kills fish with the pressure waves generated. With blasting it is really hard to control the size and shape of the hole. Another drawback of this method is that flying pieces of ice can cause considerable damage to persons and/or property. With these limitations this method can only be recommended for people in a real hurry to get a big hole or for those who are extremely lazy.

This method is normally used by accident. As an intentional act this technique is used by children and like-minded on weak autumn or spring ice. Basically you just add a heavy load on to the top of the ice until it cracks. When ice cracks the load applied falls through the ice causing a hole about the size of the load itself. The load needed for this method can be anything from a small rock to a seriously overloaded truck. Influencing factors involved are the thickness and strength of the ice - for example 20 centimetres of solid, clear ice carries a car while a walker can fall through 30 centimetres of weak spring ice. The load used should have as little value as possible to the owner since it can be lost or damaged in the process.

1Temperatures have to be below 32° Fahrenheit/0° Celsius/273 Kelvin for a while.