The Sensitive Plant - Mimosa Pudica Content from the guide to life, the universe and everything 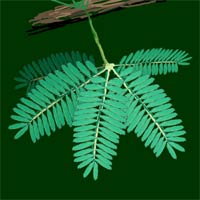 The 'sensitive plant', Mimosa pudica, also known as 'humble plant', or 'touch-me-not', is a source of fascination to adults and children alike. When you gently touch the narrow fern-like leaflets they almost instantaneously fold together and the leaf stalk droops. This sometimes sets off a chain reaction, with several leaf stalks falling on top of one another, causing the collapse of a whole section of foliage, or perhaps the whole plant. When left to its own devices, the plant gradually returns to normal, this taking up to about half an hour. This touch-induced movement of leaves is known scientifically as thigmonasty, and is thought to be a defensive mechanism against grazers.

At night, the leaves will also fold and bend in movements known as nyctonastic movements (reaction to absence of light).

Similar to the situation with the Venus fly trap, some authorities say that it may be unwise to stimulate the plant too often, as it appears that some specimens react less quickly, and therefore less efficiently under such circumstances.

The scientific name of 'Sensitive Plant', Mimosa pudica is derived from the Greek, Mimosa meaning 'a mimic' which alludes to the sensitivity of the leaves; and the Latin pudica, meaning bashful, retiring or shrinking.

In temperate climates, the sensitive plant is grown mainly as an indoor plant, usually for its fascinating behaviour. It is a shrub-like plant, growing to a height of about 60cm. The stem is upright, much branching and sparsely coated with fine, white hairs; and thus the plant has a prickly feel.

The leaves are bipinnate, meaning that they are compound leaves consisting of many leaflets arranged on side-branches off the main axis. These leaflets are called pinnae, and these are sub-divided into many little leaflets called pinnules, thus giving the plant a fern-like appearance. The pinnae are 2.5 to 5cm long and are made up of elliptical, 0.5cm long pinnules arranged in rows of opposite pairs.

The plant flowers from mid-spring to early autumn, with clusters of five to eight fluffy, ball-shaped pale mauve-pink flowers on short stalks growing from the leaf axils. Each flower consists of hundreds of fine filaments, thus giving it the appearance of a fluffy pompon, with a diameter of 0.5 to 1cm.

Robert Hooke is credited as the inventor of a useable two-lensed microscope and, in his main work, Micrographia (1667), he was the first to describe plant cells, which he observed in cork tissue. Besides his microscopical studies, Hooke also worked on physiological processes and, at the request of Charles II1 of England, was one of the first people to investigate the movements of M. pudica.

Up until about this time, there was a widely held hypothesis that Mimosa pudica plants had nerve and muscle tissues similar to those found in animals. Hooke, however, attributed the wilting of the petiole and subordinate portions of the compound leaf that it supports, to a loss of turgescence due to the 'exhaling' (excretion) of a 'subtle humour' (very delicate liquid). This, to some extent, foreshadowed the modern view, which attributes the collapse of the cells to the escape of water from the cell cytoplasm through the cell walls into the intracellular spaces, by some mechanism that is still not fully understood.

Later on, in the 19th Century, it was discovered that the plant movements are the result of a rapid loss of internal pressure (turgor pressure) in strategically situated cells in regions of the plant called 'pulvini2. Researchers have found that as the leaves are stimulated, there are changes in membrane permeability of the cells in the pulvini, which allow for the rapid movement of calcium ions. This has been related to increased cell wall pliability in the pulvini, which when coupled with decreased turgor pressure allows for movement.

M. pudica was first described from Brazil and is probably native to most or all of the New World Tropics. Today, it is considered to be a pan tropical weed where it is common in rather moist waste ground, in lawns, in open plantations, and in weedy thickets. It forms a dense ground cover, preventing reproduction of other species. Being a member of the pea family, Leguminosae, it has the ability to fix nitrogen from the air and is therefore adaptable to most soil types, including those of poor quality.

Propagation is from seeds sown all year round, if grown indoors, or in early spring if grown outdoors3. Place 2 or 3 seeds in 8cm pots of rooting mixture, give enough water to make the mixture barely moist, and place the pots in bright light at a temperature of 18 to 21°C.

Once the seeds have germinated (probably less than two to three weeks), those seedlings that look the least strong and healthy should be discarded. The remaining seedlings may be transplanted to other pots or trays when they are large enough to handle. Finally, the plants should be transplanted to 13cm pots of standard soil-based potting mixture once they are well established.

Although a perennial, M. pudica is best treated as an annual, to be kept for one season only. This is because, as well as being difficult to over-winter, it tends to become rather unsightly as it ages. However, it should be repotted several times during that period. One should use a soil-based potting mixture and the plant should be moved to a larger pot whenever the roots have completely filled the current pot. Root ends appearing through the drainage holes will indicate when repotting is necessary. However, the plant flowers best and its foliage is at its most attractive when the roots are confined in a relatively small space.

The plant may appear alarmingly droopy when first repotted, but it should recover quickly.

The plants like a warm sunny position4 and a relatively humid atmosphere.

M. pudica comes from tropical places and, in the British climate, it's best thought of as a very short-lived plant if not an annual. It isn't happy over winter in a cool greenhouse, but it does need humidity and warmth; so it may be kept either in a warm greenhouse or in a warm room in the house.

As it's such an adaptable plant, it may be put somewhere like the bathroom, where there are no draughts, and there's constant high humidity from showers and baths. Keep a mister close by and mist it with tepid water occasionally.

However, the best thing is to grow a succession of plants so that if you lose one you can replace it with another!

Use of M. pudica in Medicine

The seeds and other parts of M. pudica contain mimosine, a non-protein alpha-amino acid that is known to cause hair loss and depressed growth in mammals. However, an unlikely large dose would be necessary to cause such problems in humans.

Extracts of the plant have been shown in scientific trials to be a moderate diuretic, depress duodenal contractions similar to atropine sulphone, promote regeneration of nerves, and reduce menorrhagia5. Antidepressant activity has been demonstrated in humans. Root extracts are reported to be a strong emetic, due to the mimosine.

Although the plant is used in herbal medicine, especially the Indian Healthcare System known as Ayurveda, it is not yet used in mainstream medicine; and pharmaceutical companies are still researching its properties and uses.

1Charles II together with a group of twelve men interested in experimental science, was one of the founders of the Royal Society (of London) in 1660, and granted the Society its royal charter in 1662.2Pulvini (singular 'pulvinus') are regions with special cells, called motor cells, situated at the base of leaf petioles. As the volumes of the cells on opposing sides of the leaf or leaflet change, so one side swell as the other side shrinks, thus causing the leaf to move. 3Some seed suppliers, eg Thompson & Morgan, recommend that the seeds are soaked in hot (60°C) water for 20 minutes before sowing.4Sensitive plant is, in fact, shade intolerant and, in the wild, does not compete with tall vegetation or grow under forest canopies.5Menorrhagia is defined as a condition of excessive blood loss during menstruation.