Walking the Cinque Terre Content from the guide to life, the universe and everything 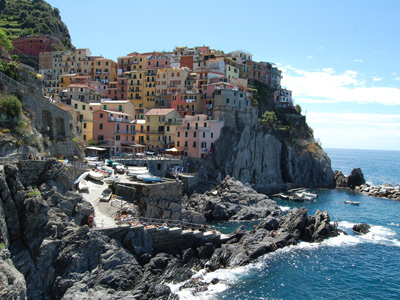 On the west coast of Italy, north of the mighty port of La Spezia, there is a series of five villages, known collectively as the Cinque Terre1 (meaning, in English, the five lands, or territories). The villages, the coastline between them and the surrounding area are now a National Park and a UNESCO world heritage site.

Each village was, for centuries, connected to its neighbours only by boat or narrow mule tracks high up on the cliffs around the inlets and bays between. Thus isolated, each developed its own character and dialect, and fiercely defended its own hinterland. Each remains, because of the difficulty of building on the terrain, recognisably much as it always was. Even now, it is a tedious and time-consuming exercise to travel from one to another by car and, in any case, cars are very difficult to manoeuvre and park in the narrow village streets. In modern times the villages have been joined by a coastal railway line, and the paths between have become a magnet for walkers from all over the world. It is not too strenuous an exercise to walk from village one to village five in a day, returning to your starting point by train or boat, and stopping along the way for lunch, ice-creams and sight-seeing: perhaps five hours walking time in total. Should you intend to make the walk, before you start you ought to buy a ticket. Unusual, perhaps, but the ticket sales support the maintenance of the path and contribute to the cost of the National Park. There are a variety on offer, the most useful of which covers the paths, railway and some attractions along the way for three days. Should you choose not to purchase such a pass, you will find custodians at the start of each section of the path who will sell you tickets, but the cost soon mounts and far exceeds the cost of your pass.

Monterosso is the most northerly and accessible of the five villages, just 45 minutes of winding roads from the motorway. The comparative accessibilty has made it the largest and most developed, with a few hotels and several guesthouses. Local fishermen catch and process anchovies, appreciated enough to deserve protected designation of origin. There is a small beach, with car-parking and an unattractive central square crossed by the railway on a concrete bridge. What charm remains is in the old town, a small network of passages with shops, cafes and restaurants aimed directly at the tourist trade. Nevertheless, you just have to walk a few hundred yards north or south of the centre to realise the attraction. Peace, quiet, and an azure Mediterranean lapping at the rocky shoreline. This part of the coast is a marine nature reserve, and only local fishermen and the inter-village ferries are allowed to ply their trade. No yachts, no cruise ships offshore. The town is best appreciated pre and post the daily tourist invasion2. Try and stay overnight (easier said than done in peak season) and enjoy a peaceful evening meal in the square and a quiet breakfast overlooking the bay.

If you are taking on the Cinque Terre walk (part of the 'Sentiero Azzuro' - the 'Blue Trail' - along the Ligurian coast), head south along the coastal path. This first section, to Vernazza, is the most strenuous. Be prepared. Be very prepared. It is tougher than you expect.

You will soon realise that there is an extensive network of twisting paths winding up and down the cliffs, dividing the family plots and vineyards. The main trail is the lowest. Assuming you have any puff left, as you begin the descent into Vernazza, look around you at the vineyards on the cliffs. You will see cables running up and down the very steep slopes. On these run little cradles, like mini cable cars, used to tend the vines by workers lying flat on the cradle. The wine is very good indeed, as indeed it should be to warrant all that ingenuity and effort. It may be wise to leave the necessary extensive sampling of these local wines until your day's mission is complete.

The last stretch of path is easier, and a couple of cafes have positioned themselves just as you enter the village. Replenish, revive and congratulate yourself. You have completed the hardest part of the trail.

The path you are following resumes without entering the heart of the village. Let others march on – you should spend a few minutes on a diversion. The village is the least commercial and least changed and wandering the narrow streets and alleys makes a pleasant change from the rugged path you have just tramped. The harbour and the square around it are particularly attractive, with many colourful, small fishing boats. There is a large, old church and a general air of a place forgotten.

The path to the next village is easier and the views less spectacular than the previous section, so that it feels shorter, even if that is not actually the case. You will shortly find yourself descending to your halfway point, the village of Corniglia. You may also begin to note that, now that the going is not so tough, you are joined by more and more fellow walkers.

Unlike the other four villages, Corniglia is not directly on the sea, but perched above it on a promontory of its own. There is no harbour as such; fishing boats get pulled up onto the rocks. It is nowadays accessible by road, but is arguably the quietest of the five – a place for lunch and the pleasure of doing nothing for an hour or so.

Back on the trail, you will congratulate yourself on choosing the North to South route, rather than the opposite, for you now descend 382 steps (who counts these things?) from the town to the station. Ascending them, judging from the panting, red-faced walkers coming up, is a rather more exhausting affair. The path becomes rather dull, between railway and rocky shore, and both the quantity of fellow walkers and the concrete underfoot detract from the coastal charms. Thankfully, it is not too long before you approach village number four.

Before you descend into the village itself, there is a small diversionary trail to try, taking you through the vineyards scattered with lemon trees – a treat in late summer. The view of the village as you approach from the north is very attractive. The houses are noticeably taller, and they are crammed together, lit by the afternoon sun in shades of red, orange and yellow around the tiny harbour. Manarola claims to be the oldest of the Cinque Terre, with pre-Roman roots. Tiny though it is, there is a cafe or two by the harbour walls from where you can watch the local kids having fun in the deep pool that serves as the town beach. Once again rested and refreshed, it is time to tackle the last section of the path, the 'Lovers' Walk' to Romaggiore.

You are unlikely to find love on the 'Via dell'Amore' in high season or school half terms. You will, rather, find yourself jostled and assailed by parties of children led by yelling teachers. You will know children to be, individually or even in groups of two or three, capable of charming and loveable behaviour. Alas, in school groups, such virtues as they may each possess are forgotten. At one point, the path passes through a concrete cavern under the railway. You will need to cover your ears as sing-songs erupt from the various rival parties, and they may include rude words in a variety of languages.

If, however, you have taken note of the warning above before planning a trip, it may be that in early spring or late autumn, on a warm, clear, moonlit evening, quiet, calm Mediterranean to one side, perfumed vineyards to the other, this trail, tree-shaded as it is for part of the way, may indeed be conducive to romantic yearnings. Take care!

As with some of the other villages, Romaggiore has chosen to pave over the river that created its harbour to provide road access. Here, this road becomes the main street, and ends in a small quayside crammed with colourful and photogenic fishing boats. The houses, old and new, are tall and mellow, the small shops aggressively aimed at the passing tourist, here in quantity. Just outside the harbour, a long queue forms for precarious access to the ferry that will take you back to your starting point. The frequent train service, accessed via a lift (free to those with passes) offers an alternative.

Levanto is a small town to the north of Monterosso, connected to it by the coastal railway and path. More of a resort than the Cinque Terre villages, it offers less packed hotels and lodgings at reasonable rates and easy access to the motorway network. Though outside the National Park, it is not without its own charms, and may offer a sensible base for a few days' break.

The cliff-top walk to Monterosso is part paved, with a bar or two along the way and some splendid views of the sea and an unspoiled maquis, the typical shrubland that once covered much of the European Mediterranean coast. The descent into Monterosso is difficult and demanding but arguably less likely to be fatal than taking the opposite climb! As you enter the village you will pass a statue of a giant looking as weary as you now feel.

Porto Venere is a similar, though more picturesque, resort south of Romaggiore and connected to it by ferry and a long coastal trail that is best left to serious hikers. It lies at the mouth of the 'Gulf of Poets'3 and the harbour of La Spezia and is within the National Park and World Heritage site. A charming town, it has a timeless atmosphere that may well provide a rewarding and less commercial haven from which to explore the coast to the north.

Our thanks to Páraic for the photograph.

1Pronounced as 'Chink-Way Tear-Ray'.2Tourist coaches will block the streets to drop off their cargo around 10am and collect them at around 6pm.3Byron lived here and once swam the straits to visit his mate Shelley who lived near Lerici on the other side. Presumably he had missed the normally efficient ferry. Quite what his host thought of his guest's arrival for lunch dripping wet and clad in nothing more than a pair of soggy (pre-speedo) trunks is not recorded.