Speedos - A Brief Variety of Men's Swimwear Content from the guide to life, the universe and everything 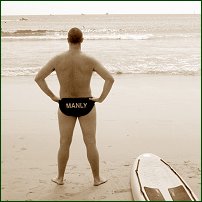 Speed on with your Speedos
- Speedo advertising slogan

An underpant-like garment with a simple drawstring worn by male swimmers, overweight wrestlers or superheroes, 'Speedos' were invented with the intention of offering greater speed while swimming competitively. The style, one with such a close-fitting snugness when wet it profiles the male swimmer's genitalia in more detail than any 3D computer software package could ever accomplish, originated as an Australian brand of swimming trunks introduced on Bondi Beach, Sydney in 19281. So successful was the brand that it later became synonomous with other varieties of swimwear, from the afore-mentioned 'budgie-smuggler' to the one piece body-hugging lycra suits worn by professional athletes.

The original Speedo design was, as such, the forerunner of all derivatives of the article of modern male swimwear that when wet clings to the body and ultimately leaves nothing to the imagination. This has led to many amusing nicknames, like 'banana hammock', being applied to the Speedo. The style is most commonly worn by many men that partake in a variety of water-sports2 including water polo, scuba diving, surfing, English Channel swimming and sunbathing, reportedly due to the following positive properties:

This Researcher's recommendation - don't. They are not particularly flattering, and fraudulent rip-offs of the superior Speedo that Olympic swimming champions wear seem to have the innate ability to collect small pockets of air due to poor elastic qualities, the drawstring loosens and frays, and when the wearer leaves the pool there is a tendancy to retain a sizeable amount of water that pulls down the trunks and gives other swimmers an eyeful of male backside or the trunks are pulled into the crack of the backside giving a 'wedgie'. Both circumstances can be visually pleasing, but invariably are not. The other major concern of any man wearing Speedos or their kin is the simple fact that certain appendages can dislodge from the Speedo, and for want of a better word, hang out for all and sundry to see. It is rarely acceptable to stuff a pair of socks down the front of a pair of Speedos to accentuate what little is there, and it is also very poor form to wear Speedos anywhere outside of the swimming pool or wrestling arena (comic book heroes can get away with it by apparently wearing tights underneath). That said, they do tend to be popular with male children (or more probably their mothers), lifeguards, or men who frequent seaside resorts/restaurants.

Urgh...no.
- a female h2g2 Researcher on being asked her opinion of men parading in Speedo briefs

For some reason, many men nearing the latter stages of their lives wear Speedos when swimming or visiting the beach. These include those that are overweight, wrinkling, sunburnt and perhaps in the throes of mid-life crisis and so need to assert their manhood, or as the case may be just show it off for all the world to see. Speedos can be looked upon as the male equivalent of the bikini, but as if in some roar of masculinity there is generally a denial of the need to shave bikini lines in older men. While a man at the peak of his life and in incredible physical condition may get away with wearing Speedos, any man over the age of 25 and sporting a few 'spare tyres' or a 'beer-belly' together with a saggy rear-end, pale thighs and excessive body hair should stick to the more visually acceptable board-short.

1Speedo were later bought out by UK firm Pentland in 1991, based in Nottingham. They have gone on to corner the market in swimwear for men, and women - although the women's variations do cover the other 'naughty bits'.2And even other land-based sports like rugby and football where they are used as supportive underwear.3This could be regarded as a negative aspect as sunbathing can lead to sunburn/skin cancer.