Handy Japanese Phrases Content from the guide to life, the universe and everything 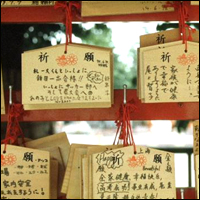 Although Japanese is considered one of the more difficult languages to learn, simple phrases are easy to read and pronounce. Japanese does not have the complex tonal variations of many Asian languages, such as Chinese, and the words are arranged in easy syllables. Japanese people are often scared to speak English with a foreigner, but will warm up after hearing a few Japanese phrases.

The vowel sounds do not change, but can be combined or lengthened, eg:

These consonants are always attached to a vowel and cannot stand alone, with two exceptions:

Japanese words are not stressed, as English words are. In order to keep the phrases understandable, try to pronounce them according to the syllables, eg sa-yo-na-ra, kon-ni-chi-wa.

1With this sound, the tongue is placed halfway between an 'r' sound and an 'l' sound2Use any of the question words