Alternative Uses for Socks Content from the guide to life, the universe and everything 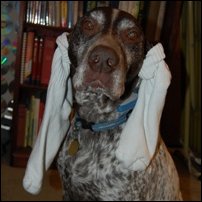 While most people are familiar with the purely functional use of socks, many people have discovered that socks can play a much more interesting role in life. Whether used to entertain small children, carry random (and typically useless) items, or to serve as a warning marker, socks have transcended their role as mere items of clothing.

Socks can easily entertain those who are bored, though it often requires a bit of effort on the part of the wearer/owner of the socks. One of the most common entertainment uses of old socks is the sock puppet. While simple sock puppets can be made with nothing more than a white athletic sock and a pen, more elaborate sock puppets can be made with yarn (for hair), ping-pong balls or buttons (for eyes), and extra bits of fabric (which make a good tongue). The sock puppet is a simple project, and has an amazing effect on children. Anyone who has spent a five-hour car ride with an unhappy toddler should try bringing a sock puppet on the next family car trip.

However the simple puppet is only one of many uses for the sock. By placing an old tennis or lacrosse ball into the toe, the old sock can be used to make a Foxtail, which is great fun. For those unfamiliar with a Foxtail, it is simply a ball with a dangly bit on it. The ball is thrown into the air by gripping the dangly bit and hurling the contraption straight up. The object is to catch the Foxtail by the dangly bit, but catching it as close to the ball as possible.

If all else fails, the sock can be wadded up into a ball and hurled at the nearest person (preferably a friend or family member... throwing at strangers is not encouraged). This is often a good way to end boredom.

Socks have many roles that they can play in daily life. Faced with, say, a ball, coin, or other important object that has fallen into muck of unknown origin, many people simply give up and consider the object 'gone for good.' However, a simple sock can often save the day. By whipping one sock off and using it as a glove, a person can easily retrieve the object from the muck without becoming dirty. Also, should you decide that you would rather not to carry the soiled object after retrieval, all you need to do is slip the object into the sock itself, and carry it home in the simple and effective sack that the sock has become1. This technique is particularly effective when walking along the beach. Many people find themselves removing their socks and shoes before taking a beach stroll, and then discover some interesting item, be it a shell, an attractive stone, or whatnot. This happens quite often if one takes a beach stroll with children in tow. If so, simply use your 'sock sack' to carry the beach treasures home.

Socks also can serve an important role in an emergency situation. Socks can be used to make a tourniquet, a (very) temporary bandage, or for many other uses. One Researcher has seen them used to hold closed a gate to a cow pasture until a more permanent solution could be found, and also to mop up spilled motor oil. At a pinch, a sock can make for a very effective handkerchief.

This use is by far the most important one that socks serve (apart from keeping your feet snuggly warm and blister-free). Socks are part of our system for marking territory.

For example, one need look no further than the bathroom. Dirty socks strewn about a bathroom floor might indicate that the homeowner is a sloppy housekeeper, but it also marks the territory. It clearly says 'this room is mine'. In fact, many men who fear commitment will intentionally leave random clothing bits (such as socks) strewn about the flat as a warning to potential mates, ie, 'this is my home. Don't get too comfortable'. Socks that litter the floor of a teenager's room, on the other hand, clearly say 'This is my room. You can't make me clean it'.

Lastly, socks have a marking purpose that is more clearly defined and intentional. If a single male (usually a resident in campus-housing) hangs a sock over his closed door so that part of the sock is peeking out, this is a fairly well-understood signal: 'Do not disturb... there's a girl in here with me'.

1Astute readers will notice that 'sock' and 'sack' are rather similar. Linguistic coincidence, or intentional design?