Some Great Castles of Wales Content from the guide to life, the universe and everything 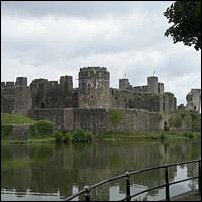 This Edited Guide Entry is one of six sub-divisions of the mammoth Community collaboration on Great Castles. Links to the remaining five entries can be found at the bottom of the page.

Beaumaris is the last of the great Edwardian castles built to ring Snowdonia - and it is also the best with an almost perfect concentric design. However, it was never quite finished. A little out of the way on the Isle of Angelsey, Beaumaris is moated and has wonderful curtain walls, gatehouse and keep.

This is a completely different kind of castle. This castle is big - in fact it is the second largest in Europe after Windsor Castle (qv). It has everything that a Medieval fortification should have - a big moat filled with water (and ducks), and a large drawbridge up to an imposing gate set into the curtain wall. Within this is another set of walls and towers, inside which are the central keep and great hall. It is a good example of a 'concentric castle' with several layers of defence.

Cardiff Castle is a large square 'fort' in the centre of the city. It comprises a large square curtain wall with cannons set in various apertures, a motte (mound) surmounted by a stone keep and residential 'great hall' and tower on the eastern side. Much of the interior area is laid to grass. The hall and tower served as the home of the Marquis of Bute for many years and is sumptuously decorated in a 'Gothic revival' style - with lots of features which are works of pure fantasy from the overactive Romantic imagination common to many Victorians. Behind the castle is a large area of parkland containing an arboretum gardens and playing fields. The castle is sometimes used for concerts and public events.

A few miles to the North is Castell Coch ('The Red Castle'), which is a tall round castle set on the side of a hill to guard the river valley below - which is the main route north out of Cardiff. This small castle has had all the spectacular excesses of the Gothic revival lavished upon it. It's a true fairy-tale castle, with tall pointed spires on the top and a fabulous interior - it is for its murals of Aesops Tales.

Other Entries in the Great Castles Collaboration