Staple Removers Content from the guide to life, the universe and everything 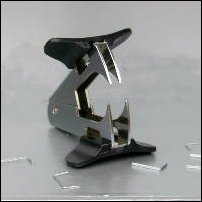 A staple remover is a device used for removing staples originally implanted by staplers or similar contraptions. The origin of the staple remover is, by necessity, an offshoot of the development of the stapler, resulting from a need to remove staples that have been inserted in error, for whatever reason.

The root principle of the staple remover is that it's a lever. The simplest staple remover is a length of wedge-shaped metal with a flattened, upward-curved, and tapered end of dimensions sufficiently narrow as to allow its insertion beneath the ends of the offending staple. By holding the surface into which the staple is inserted with one hand, and applying pressure on the 'lever' with the other, it should be possible to bend the staple in such a way as to loosen or remove it. The issue with such a basic device, however, is that damage to the stapled surface is likely to occur.

Staple removers have existed in one form or another for almost a century. Early staple removers used a lever, as described above, inserted within the body of a larger device. The device served the purpose of both holding the stapled material in place and providing a means to apply firm and even pressure on the lever without requiring too great an expenditure of energy on the part of the user.

A staple remover patented in the early 1920s, for example, used a sprung plunger to apply pressure. The device was placed over the staple with the curved, flattened prongs at one end of the main lever inserted beneath the flat back of the staple or crown. Pressing the plunger triggered a series of connections that raised the pronged end of the lever sharply, extracting the offending staple with a single swift movement. The prongs lifted the staple on either side, bending the back of the staple downwards and pulling the 'arms' upwards out of the stapled material.

The modern, conventional staple remover, most often seen in offices, consists of a pair of pivotally connected arms that move with a scissoring motion so that one nests within the other. The two arms appear almost identical, apart from the fact that one is small enough to fit inside the other. There are usually plastic covers that cover the top and bottom that allow for more ergonomic - ie, comfortable and ideal - contact between the user's hand and the staple remover.

The metal arms are shaped like rectangle boxes about two inches in length, half an inch across and about one quarter of an inch deep. The inner face of each, away from where the fingers make contact with the device, has an open face, which is what allows one to sit inside the other. At one end the rectangular arms are hinged, while at the other end tapering claws poke towards each other, so that when pressed together the device closes like a fanged jaw.

Finally, there is a small spring inside at the hinged end that allows the removed staple to snap open when free from artificially-applied pressure. This allows the device to exert its own outward pressure, after closure and insertion beneath a staple, to assist in easy removal from stubborn staples and keep the device open so that it is ready to use again. The presence of this spring means that the device can easily be used with one hand. If there was no spring it would be necessary to open the remover, place it over the staple and insert it - an operation that almost certainly would require the use of both hands.

To make the average office staple remover easier to imagine, for those who have never seen one:

The action of the teeth bends and pulls the staple, stretching it so that the prongs pull upwards and apart. The operation can, equally, be effected upon the prongs themselves instead of the crown of the staple. In this instance, the staple remover teeth connect beneath the prongs and pull them upwards. The movement, essentially, attempts to restore the staple to its original form, straightening the bent prongs of the staple, so that it can be easily extracted from the other side.

The ability to adapt the device for use from either side means that a partial failure to remove the staple by the crown, which may leave a curled prong in place, can be resolved by turning the stapled article around and uncurling the stubborn prong.

The ingenuity and keen sense of the bizarre common to many members of the human race means a staple remover may be used for many activities other than the removal of staples. Common alternative uses for staple removers include:

Staple removers may commonly be found in different colours and shapes, and with occasional improvements in the fitting of the plastic elements to the fingers pressed against it. Other variations may include rubberized grips or combination with other common office implements. The combination of stapler with staple remover is an ideal one-piece device, for example. In this instance the remover is the most simple lever form: a triangular wedge that can be inserted beneath the staple than rolled upwards to extract it. The arms of the staple remover may be extended backwards so that the device resembles a pair of scissors, providing greater leverage for stubborn staples and heavy duty ones commonly used to secure particularly thick documents.

Stationery stores, and stationery cupboards, are the most common source for the acquisition of staple removers. The most common and basic staple removers are reasonably cheap, but are best guarded in the office environment. Like staplers, they have a habit of disappearing very quickly and quite suddenly if left openly on a desk top. The common need to staple together and ply apart documents means that fellow officer workers, passing an unattended desk with a staple remover, will invariably pick it up, use it, and then forget to return it to your desk.