The African Dwarf Crocodile Content from the guide to life, the universe and everything 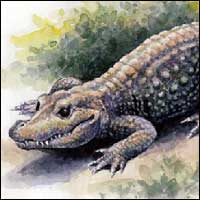 Thanks to many natural history television programmes, most folks around the world are fairly well-acquainted with perhaps the biggest and deadliest predator on the African continent - the Nile crocodile. And an impressive creature it is: incredibly efficient, its body plan has hardly changed for over a hundred million years. Crocodiles still live the way they did when the dinosaurs ruled the Earth. So, many people today know and respect the Nile crocodile. But what many people do not know, is that there are other crocodiles in Africa, too. There's the Slender-snouted crocodile and of course, the African dwarf crocodile. The dwarf crocodile is, in particular, an interesting species, differing enough from all other crocodiles to be awarded its own genus, Osteolaemus, whereas other crocodiles are in the genus Crocodylus.

At the moment it is not clear whether African dwarf crocodiles should constitute one species, or three. Recent research has indicated that there are three genetically distinct groups. It still needs to be determined whether these three differ enough from each other to constitute separate species, or whether it would be better to consider them subspecies - a level where interbreeding between the populations is still possible.

For the present, the dwarf crocodile is still considered as a single species, Osteolaemus tetraspis. The genus name, Osteolaemus, means 'bony throat' - a reference to its heavy armour, extending not only over the back and tail, but over the belly and throat as well. The species name, tetraspis, means 'four shields', and refers to the four prominent shield-like scales on the back of its neck.

Quite a Small Crocodile

The crocodiles regularly featured on TV are the big ones. Nile crocodiles regularly exceed 5m in length; a handful of giants might even make it to 6m. Compared to that, the dwarf crocodile typically reaches only 1.5m in length, with the record being one of 1.9m. The largest one, therefore, is about the size of a tall man. In fact this makes it smaller than the largest lizard in Africa, the water monitor, which can exceed 2m in length. The dwarf crocodile is more heavily built than the monitor, though. Large males can reach 80kg in weight, while females can achieve 40kg. For a crocodile, this is quite a modest size. The Nile crocodile can exceed a ton1!

The dwarf crocodile does look similar to the small New World caimans, despite not being very closely related to them. It also looks quite similar to a baby of its closer relative, the Nile crocodile. As such, it has a 'cute' appearance that persists into adulthood: a relatively large head and small body, proportionally big, bright eyes and a short snout, giving it a rather snub-nosed appearance. Also, in marked contrast to its bigger cousin, it is quite harmless to humans.

This crocodile, being small, faces greater natural threats than the Nile crocodiles do. Dangers in their environment include predators such as leopards and other jungle cats and even large otters in the rivers. Consequently, the dwarf crocodile is comparatively much more heavily armoured. Bony knobs and plates embedded in the skin, called osteoderms, densely cover its back, and also its belly, throat and the underside of the tail. Remarkably, even its eyelids are reinforced with bone! It is the most heavily armour-plated of all the crocodiles.

This armour, in a way, actually protects it against humans too, but not the way you might think.

After all, even the heaviest bony armouring offers little protection against firearms. But this crocodile is rarely hunted. Firstly, it is not a threat to people. And secondly, the heavy bony armour in the skin makes its leather unattractive to humans. Crocodile leather products are ideally made from smooth and pliable areas of skin: in typical alligators and crocodiles this would be the skin of the belly, because it has few osteoderms. The heavy bony reinforcement that the dwarf crocodile has, even on its belly, like in the case of the caimans (relatives of alligators in South America), makes it very difficult to process its leather. Even with the best possible removal of the osteoderms, the leather will be low in quality. Which is good news for the dwarf crocodiles.

Apart from their small size, 'cute' appearance, and the heavy armour of these crocodiles, they are also usually rather darker in colour than other African crocodiles. Adults may be almost uniformly blackish; younger animals have lighter brown banding on the sides, and yellow patterning on the head. The well-known, West African form has a more prominently pointed and upturned snout, lighter body colour, and heavier bony armour, than the form that inhabits the Congo Basin. The third form, though indicated by genetic studies, has not yet been formally described.

Life in the Jungle Rivers

This little crocodile's home is in rivers fringed with rainforest from Senegal in West Africa, eastward and southward to the Congo Basin and northern Angola. They inhabit the lower reaches of these rivers, where the water flows at a leisurely rate, and in places that form deep, quiet pools, sheltered by overhanging vegetation. Dwarf crocodiles are also sometimes found in pools in swamps, or even ponds amidst savannah vegetation. In the latter case, where rainfall is seasonal and the ponds dry up in the dry season, these crocodiles may dig deep burrows for themselves in which they will shelter until the water returns.

In the main, the dwarf crocodile prefers the year-round moist and warm climate of the rainforests. There it also digs burrows into the riverbanks, but these are used as hideouts during the day; they prefer not to bask in the sun out in the open during daytime like their bigger relatives do. Night is the time of the hunt. Those big eyes, proportionately the biggest of all crocodiles, come in handy then. In line with its smaller size, its prey is also smaller, being mostly fish, frogs, and crabs. Taking advantage of the shelter of dense vegetation, dwarf crocodiles even occasionally come out to hunt on dry land where they will target small animals, or even eat carrion. In response to the changing of the seasons, they may switch from concentrating on fish, to concentrating on crustaceans. Like larger crocodiles, they can survive for long periods without food.

Breeding also happens according to the seasons. North of the equator, the wet season starts in May or June; south of the equator, it would be October or November. Then and only then do the otherwise solitary male and female crocodiles interact; to be precise, they mate. Following mating the crocodile mothers build their nest mounds. These are made at the water's edge, from vegetation pushed and piled up into a heap. The wet, rotting vegetation actually generates some heat to help the eggs hatch. A typical batch of eggs would number around ten, though up to twenty eggs have been recorded.

Incubation takes from 85 to 105 days. Just as other crocodiles do, the mother will stay around to watch over the eggs until they hatch. The babies, when they emerge, are about 28cm2 long. Interestingly this is not significantly smaller than Nile crocodile hatchlings - these are typically about 30cm long. The dwarf crocodiles' smaller adult size, therefore, is due to a much slower rate of growth.

Having made sure the hatching has proceeded without problem, the mother will escort her offspring to the water, and stay close and look after them for a time; we still don't know for exactly how long. But this motherly supervision is vitally necessary for these tiny little crocodiles, since they are potential prey for large fish, birds (such as storks or fish eagles), mammals (such as otters or mongooses), or reptiles (for instance monitor lizards), or even other crocodiles.

With all the threats the little crocs face, only a few from each egg batch will make it to maturity, at the age of five or six years. This is the age when they can begin to reproduce. As the adult dwarf crocodiles have no natural enemies they can live to quite a ripe old age. Zoo specimens have been recorded as living for over six decades. There might even be a few centenarians out there, in the wild!

Though the dwarf crocodile is not hunted much, as noted earlier, it is still hunted to some degree. Its skin, though not high-quality leather, still serves for some basic uses. It is also occasionally killed for its meat, which one can assume, like other crocodile meat, to be palatable enough though not a great delicacy. Mostly though, it is endangered by the destruction of its habitat. It needs the shelter of trees and other plants along the banks of the lazy rivers it inhabits. Also, forests are being cut down over much of its range.

Fortunately, the dwarf crocodile occurs over quite a vast range in Africa and there are still great undisturbed, forested stretches of the great equatorial rivers for it to inhabit. Furthermore, there are many dwarf crocodiles in zoos all over the world, such as the San Diego Zoo, Philadelphia Zoo, Whipsnade Zoo north of London, Bristol Zoo, Bratislava Zoo in Slovakia, and even Toronto Zoo in Canada. In Africa, a good place to see them is the Saint Lucia Crocodile Centre in South Africa.

As such, dwarf crocodiles can be classified as vulnerable, but still not in immediate danger of extinction.

If global climate change indeed proves to be a reality, this might pose a very severe risk. Changing patterns of rainfall may cause rivers to dry up, or change course, or forests to retreat and be replaced with grassland. And if the worst happens, and the ice caps melt causing the sea level to rise dramatically, great areas of lowland forest will be flooded by the ocean, and this particular crocodile cannot exist in saltwater.

Global climate change, if severe enough, might potentially disrupt human civilisation to the point of widespread chaos and the loss of zoo specimens of this and many other species.

But we must remember that crocodilians are indeed highly robust, and have indeed survived the catastrophe that wiped out the dinosaurs. They've also survived the great climatic upheavals of the recent ice ages. That should give us much hope for them, but we must not be complacent. We still need to do all we can to minimise the harm we do to all the living creatures of our planet for their sakes, as well as for ours. It would be a shame if these cute little forest crocodiles were no longer around.

1A metric ton is the equivalent of 1,000kg.2Just slightly less than a foot.