The 'I Ching' - the Book of Changes Content from the guide to life, the universe and everything

The I Ching (pronounced 'yee jing') is an oracle or divination device, as well as a book of wisdom based on the principle of change. It utilizes symbols comprising six broken and/or unbroken parallel lines known as hexagrams. Each hexagram has its own unique meaning. These readings can be used for insight into whatever question that is before you. Furthermore, the very lines themselves have unique meanings if they are a 'changing' line.

The Elements of the I Ching 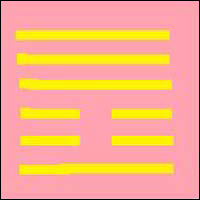 The I Ching uses a set of symbols that represent the process of change. The basic symbol is a horizontal line. A line can be unbroken (a Yang line) or broken (a Yin line). A trigram is made up of three lines. As there are eight possible combinations, there are eight trigrams. When two trigrams are placed one on top of another, it becomes a hexagram. With six lines there are 64 possible combinations, and therefore 64 hexagrams which make up the I Ching.

The Origins and Evolution of the I Ching

The origins of the I Ching are lost in antiquity. Legend has it that Emperor Fu Shi (also known as Fu Hsi and Fuh Hi) discovered the eight trigrams on the side of a dragon. He is also credited with naming each trigram and giving them an associated image. For example the trigram Ch'ien which is made up entirely of unbroken 'Yang' lines symbolises heaven, the male, and activity. The trigram K'un on the other hand made up entirely of broken 'Yin' lines symbolises earth, the female, and passivity.

Some time later, an unknown sage got the bright idea of combining the eight trigrams with each other, creating the 64 hexagrams that make up the I Ching. Each of these hexagrams took their image and meanings by the two trigrams that made it.

64 possible answers to any given question is better than what you would get with a Magic 8 Ball but when it comes down to it, it's not a lot of answers for every conceivable question. King Wen, and his son, the Duke of Chou therefore conceived of the concept of a 'changing line'. This is a line that is in the process of changing. An old Yang line would change into a new Yin line, and an old Yin line would change into a new Yang line. This will create a new hexagram. Each of these changing lines also had its own meaning, bringing the total number of answers the I Ching can provide to a whopping 4096!

The last great contribution to the I Ching came from the legendary philosopher Confucius (also known as K'ung Fu Tsz'). Confucius wrote what is known as The Ten Wings, a detailed treatise on the I Ching as it existed in his time. They include such things as a commentary on the Images (Third and Fourth Wings), discussion of the trigrams (Eighth Wing), and note on the hexagrams (Tenth Wing).

Consulting the I Ching

There are two traditional methods for consulting the I Ching as an oracle. They are the use of 50 yarrow sticks, or the use of three coins.

Preparation for Consulting the I Ching

The most important preparation for consulting the I Ching is framing the question you wish answered. Clearly defining your question will help the reading be relevant to your situation. It is better to be precise than vague. Typical questions can be 'What will happen if I...?' 'Should I...?' 'What lies in my immediate future?' 'What should my attitude about... be?'

There are also other preparations that can be made, such as washing your hands, lighting incense, and facing south (as did all persons of authority in ancient China).

Consulting the I Ching - Coin Method

The coin method is much simpler than the yarrow stalk method, and much faster. All you need are three coins. Ideally these would be old Chinese coins with the hole in the centre, where one side is inscribed (the Yin side) and the other is blank (The Yang side). If you don't have old Chinese coins, any three coins will do, with the 'heads' considered the Yin side, and the 'tails' considered the Yang side.

Draw the bottom line of your hexagram as follows:

Consulting the I Ching - a Third Method

In this modern day and age, you can have a computer generate a hexagram for you and scrap all this fiddling around with sticks and coins.

Other Uses of the I Ching

The I Ching is more than just an oracle; it has also been used as the basis for a Martial Art.