Joshua Tree National Park, California, USA Content from the guide to life, the universe and everything 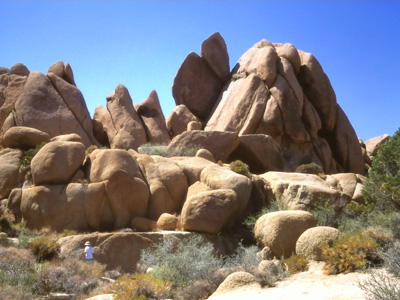 These prejudices, although understandable, are not fair. Those National Parks have far more to offer than a big hole, a rock with a waterfall and a big geyser. What is true is that they are crowded with cars and buses most of the time. So if you'd like to see a National Park without too many fellow visitors, take the Joshua Tree National Park into consideration.

It is not only one of the lesser known, but also one of the youngest parks. It was declared a National Monument in 1936, Biosphere Reserve in 1984 and National Park no sooner than 1994. Many people who live nearby there still ask you 'Are you going up to the monument?'.

The National Park lies approximately 140 miles east of Los Angeles. You reach the park via the Interstate 10, which will take you to the south entrance at Cottonwood Springs, or via the Highway 62 (Twentynine Palms Highway), taking you to the north entrances at Twentynine Palms and Joshua Tree Village.

The Joshua Tree National Park is basically a desert park, so the most comfortable times to go there are in spring and autumn, with average day/night temperatures of 85/50°F (29/10°C). During winter, day temperatures are around 60°F (15°C) with regular frost at night time. During summer it is only recommended to go there if you like it hot: average day temperatures are over 100°F (38°C), and even the night will not be significantly cooler than 75°F (24°C). The air is usually very clear1, with a humidity of less than 25%.

The Joshua Tree National Park is huge. It covers almost 800,000 acres, which makes it one of the biggest National Parks in the USA. It can be divided into two different parts, both of which are deserts:

There are only five spots in the park where water occurs naturally. As in most deserts, palm oases indicate these five places.

As in any hot and dry environment, life is slow here. Very slow. Sometimes it seems as if the dry heat had won its fight against the deplorable plants, but once the rain comes2 the desert explodes with blossoms. If you are lucky enough to go there when this happens, you'll get to see something that you'll never forget. But most of the time, vegetation has to reduce its metabolism dramatically. This makes it extremely vulnerable to intrusion. One single step beside the path may cause a setback of decades for the vegetation. So the standard rule that says 'Take nothing but pictures, leave nothing but footprints' should be 'Do not even leave footprints' in this particular case.

Camping in the Park

A night in the park is an unforgettable experience. Here's what the Researcher of this entry said:

The night we spent in the Joshua Tree National Park with our motorhome was one of the highlights of our holiday. We had a camping site in the 'Hidden Valley', surrounded by rocks. You could not even see from one site to the next one, and every site had its own rock to climb. Sitting on top of the rock at sunset was indescribably beautiful. We visited the Grand Canyon, we went to Monument Valley and to Yosemite National Park, but this very night in the Joshua Tree National Park is burnt into our memories.

Some of the camping sites in the NP are free and operated on a first-come-first-serve scheme, for others you can make reservations but you'll have to pay. As these rules and fees are subject to change, you'd better check that at the Joshua Tree page of the National Park Service, where most of the factual research for this entry was made.

1Unfortunately the Los Angeles smog is starting to find its way to the National Park, and the visibility has been deteriorating over the last 30 years.2It comes rarely, but it comes.