Visiting the Grand Canyon Content from the guide to life, the universe and everything 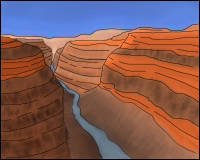 One of the seven natural wonders of the world1, and with perhaps the most impressive scenery of the United States, certainly of Arizona, the Grand Canyon is one of the most powerful tourist pulls of the world. The enormous hole in the ground attracts five million people every year. With its instantly recognisable image, the Grand Canyon has attracted its own airline2, an expedition company and a veritable host of lodging, eating and shopping franchises.

One of the best hotels of North America, the Adobe Village Graham Inn, lies at the Grand Canyon. Most hotels offer tours and various activities. Being near an old Hopi Tribe village, tours and visits to the ruins are often provided. Every major hotel company in America stakes a claim around the area, including the Holiday Inn, the Best Western and many other chains.

Somewhat less expensive accommodation is also available: there are several campgrounds available for the more stingy traveller, or for any people who want to 'rough it'.

Of course the hotels offer many fine restaurants, but there are also several good places, both in the National Park and the surrounding area, to eat. Being in a South Western state, however, don't expect many vegetarian foods.

The Grand Canyon also has a wide variety of fast food outlets. The areas around the park additionally have fine native cuisine and some dinner shows. Alternatively, if you prefer to cook your own food, there are some grocery stores in the park.

Being a huge tourist attraction, the Grand Canyon has many shops. As well as stands on the side of the road, there are many souvenir shops around. Typical souvenirs are arts and crafts of the Native Tribes, such as baskets, pottery and rugs. 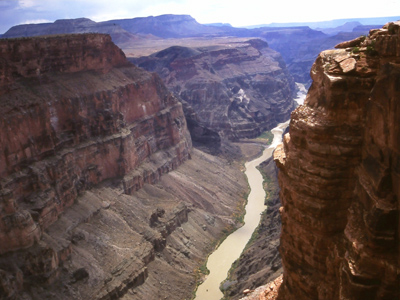 The Grand Canyon is the Mount Everest for non-mountain hikers. It offers a challenge, both physically and mentally. The descending sides offer many rocks jarred loose from years of erosion. Within it is hundreds of rock walls, valleys and cliffs. The huge landscape does more than make you feel small; it warps your perspective, and, when seeing the whole view, it leaves out the details and pitfalls of the trails.

The view when hiking along the side of the canyon is considered to be one of the most beautiful sights and endearing experiences of America. Like the Mall of America, it's one of the few tourist traps in the USA that lives up to all of its hype.

There are many different types of tour to see the Canyon and the area surrounding it.

There are three main ways to fly - by aeroplane, helicopter or hot air balloon. The Grand Canyon offers them all. From the sky, you have a magnificent view of the Canyon.

A helicopter can manoeuvre itself much closer to the Canyon, and can go places that an aeroplane can't. Helicopters also generally offer a much better view, with larger windows and doors. Additionally, helicopters can give more exciting experiences. There are at least four helicopter companies around the area.

Horseback tours are good for the person who wants to see the Canyon, but doesn't want to walk. Tours usually reach the rim by passing through the forests surrounding it. While the tours don't go into the canyon, or around it for very long, it is worth seeing the areas around it as well as the Grand Canyon itself.

You can also ride a burro down into the canyon itself. They tend to be much softer and more padded than a horse.

The Grand Canyon's Colorado River led to the creation of river rafting. As it goes through the centre of the canyon, you can see the walls at a leisurely pace. There are no white water rapids, so the tour is more drifting than rafting.

The Grand Canyon Railway is an historical recreation of the early 1890s. This train is more for entertainment (historical entertainment, including a shootout) than travel, although it does go to the canyon daily.

People are advised to remember two things. Firstly, although the Grand Canyon provides for shopping, eating, sleeping and aerial tours, it is still in a remote part of the desert. The closest major city is Flagstaff3, which is still a long way from the park. Secondly, the Grand Canyon is a National Park, and so has a number of rules to protect it. Don't bring things in that you won't take out with you when you leave.

The few small businesses around the park, such as auto repair and film shops, are often very crowded, and the long wait for such things may be unavoidable. It's good advice to be prepared with water, a few sets of clothes and an indestructible camera. If packing lightly, you would be advised to visit the Southern Rim, as it has more services.

Be aware that in the area of the Grand Canyon people do not observe Daylight Savings Time, because they are in Arizona4.

Weather around the area can be harsh at times in the summer, but in the winter, being 2,100 metres above sea level, it can snow. You would be well-advised to prepare for the weather and a variety of different temperatures by packing appropriately.

The Grand Canyon is one of the greatest natural wonders of the world. No matter how unlikely it may seem at the outset that you will be awed by a hole in the ground, it will almost certainly happen. Almost anyone you talk to who has been will try to impart a feeling that you can only get by seeing it. To end, here's one Researcher's description of their visits to the Grand Canyon.

I guess it's hard to describe in words, but the first time I visited the Grand Canyon (in the 1970s when I was a boy) it had a tremendous impact on me. That impact is never diminished, every time I return.

1The others are the Victoria Falls, the Northern Lights, Mount Everest, the Great Barrier Reef, The Harbour at Rio De Janeiro and the Paricutin Volcano.2In practice, it only runs flying tours of 100 miles.3You can also reach Las Vegas in a few hours.4Indiana, Arizona and Hawaii, by state law, do not follow DST and remain year-long in their local Standard Time.