Proms in the Park - Last Night 2000 Content from the guide to life, the universe and everything 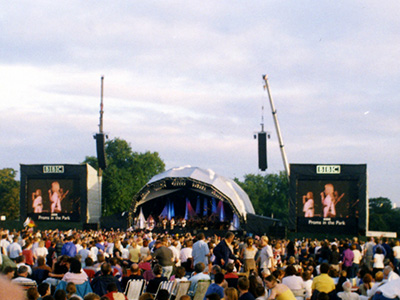 Saturday 9 September, 2000, was the Last Night of the Proms, and this is a report of this important cultural event.

Having taken the London Underground Piccadilly Line to Hyde Park Corner, the journey culminated at the entrance of the part of the Park which had been sectioned off. Queueing took about 45 minutes, enlivened by observing the flag sellers, umbrella wavers, hat wearers, and not to mention champagne-bottle balloons.

Finally admission was gained through the cattle-market entrance and a position near the front, to see the stage and huge television screens, was found. Most attendees brought their own picnics, either setting up elaborate tables and chairs or just spreading a blanket on the ground. It was about this time that it rained briefly, which caused a Mexican Wave of umbrellas opening throughout the crowd. There were various reports of how many people were in Hyde Park. Some said 20,000 people, others 40,000 - either way it was a lot.

Having set up comfortably on a groundsheet, noting where the toilets and ice-cream van were, and having got out food and drinks, the introduction began at 5.30pm. This was hosted by Ed Stewart, a BBC Radio 2 presenter. Sadly, his jokes were terrible. He was also obsessed with swapping his jacket with other performers, regardless of whether they fitted. The introduction started with the BBC Big Band, followed by Georgie Fame. The most memorable performance in this part of the day was Georgie Fame singing 'I Said Yeh-Yeh'...

The highlight of the introduction was undoubtedly Björn Again, an Abba tribute band. They soon got the crowd on their feet, waving, jumping, dancing and singing. Björn Again deserve every praise: they re-created the 1970s atmosphere and Abba-dabbadoo perfectly.

At 7.30, the first part of the actual Proms started, hosted this time by Terry Wogan. Performing in this half were Angela Gheorghiu and Willard White, two amazing opera singers with frankly unbelievable voices. Even saying 'I'll feel completely inadequate in the shower for the rest of my life' seems to belittle their ability - there are no words to describe their performances. Angela Gheorghiu, with her dress that can only have come out of a bridal shop, and Willard White singing - you really had to be there.

Other highlights were Julian Lloyd Webber1, playing 'Air on a G String', one of the most relaxing tunes ever composed, which was very dreamlike and moving. The Royal Choral Society and the BBC Concert Orchestra were both very impressive. The Chieftains, an Irish folk band, were great performers with the crowd loving them, especially when some Irish dancers appeared on the stage as if from nowhere, and the cheering became infectious.

Yet the real magic began at 9.40. This was when broadcasting came live from the Royal Albert Hall. This started with Elgar's 'Pomp and Circumstance' and the singing of 'Land of Hope and Glory'. Seeing 20-40,000 people waving Union Flags, Welsh Dragons, Flags of St George - literally everyone had a flag in their hand - waving and singing and being part of a choir that size is an experience you never forget.

The night continued with the joyful and tears-of-laughter-inducing Sir Henry Wood's 'Fantasia on British Sea Songs', which is just pure, bouncy fun to hear. How can anyone have heard them without their eyes shining and souls singing? The climax was, as always, the singing of 'Rule Britannia'. The build-up of 'Thine Be The Glory' - such a moving song itself - led into it so beautifully. Words cannot describe how joyful it was - just pure exhilaration.

Of course, the night was not just about how musicians and composers of all nations can move people; whether you are alone at home, in an open mood, or in a large crowd. The night also had plenty of humorous occasions. The best by far was during The Chieftains' performance, when one of the musician's mobile phones rang actually in the middle of one of their songs. Oh, and not to mention the antics of people who had had a little too much to drink!

All in all, it was a night to remember!

1The brother of Andrew Lloyd Webber.