The 1948 London Olympics Content from the guide to life, the universe and everything 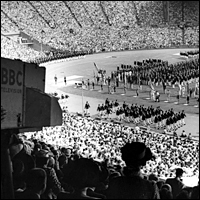 After the prolonged media coverage of the build-up to, and London's victory in, the 2012 Olympics race, it seems hard to believe that the last time the summer Olympics were held in London, the city was up against no competition whatsoever. After the turmoil caused by the Second World War and two Olympic cancellations, the UK simply volunteered its capital as host city for 1948 and was willingly accepted by the International Olympic Committee. Wembley Stadium was pressed into temporary service as the main venue, and the Games were broadcast on television for the first time, even though very few had TV sets.

It was not to be an Olympics of daring innovation. The world was still recovering from the shock of large-scale war and many countries were still in depression. The primary aim of the London Olympics was to draw countries together, not to emanate glitz and glamour. No individual sport made its full debut in London, although a number of events were held for the first time, including women's 200m sprint; women's kayaking; certain weight categories in wrestling and weightlifting; and several classes of yachting.

Japan and Germany were not among the 59 countries invited, due to the obvious potential for conflict with the host country. Italy, however, sent a full team, and finished fifth in the medals table. In an admirable move to reduce political tensions, Communist countries were invited for the first time; almost inevitably, then, 1948 saw the first defections by disaffected athletes.

Perhaps the strongest national rivalry came in the men's hockey final, which saw Great Britain take on a newly-independent India, taking part in their first Olympics. Great Britain had not conceded a single goal in their progress to the final, and yet were humbled 4-0. Hockey has remained a national sport in India ever since.

Other nations celebrating in 1948 included Sri Lanka (Ceylon, as it was at the time) and Korea, both of whom took home their first ever Olympic medals; their heroes being Duncan White (400m Hurdles) and Kim Sung-Jip (Middleweight Weightlifting) respectively.

For many people, the 1948 Olympics belonged to Dutch athlete Fanny Blankers-Koen. 'The Flying Housewife' was already a very successful athlete in her own right. She had competed in the 1936 Olympics at the age of 18, and at the time of the Olympics held world records for 100m, 200m, 80m hurdles, long jump and high jump. She had given birth to a daughter (also called Fanny) just three months before entering the 1946 European Championships, winning two gold medals there. Sensibly declining to enter the jumping events in London, she took four gold medals home to Amsterdam: 100m, 200m1, hurdles and sprint relay. It is unlikely that this achievement of four golds in a single Games will ever be matched in the world of female athletics.

Another track and field athlete was taking his first steps to becoming a legend, but almost had his glory upset by some incompetent officiating. Emil Zátopek had served with distinction for Czechoslovakia during the war and was still serving at the rank of Lieutenant when he took the trip to London. He set off in the 10,000m final at a rate of knots and became the first man to run that distance under 30 minutes at the Olympics, winning by nearly a lap of the track. He was so far ahead that the steward neglected to ring the bell signifying the final lap. The said steward claimed to be watching the pole vault, and was presumably given a stiff dressing down later. Despite the confusion in the stadium, which later mixed up most of the lower placings in the race, Zátopek knew he had won. He came second in the 5,000m at London but completed an amazing long-distance treble four years later in Helsinki, adding the marathon title on the final day to his 5,000m and 10,000m successes.

An established legend in the world of fencing was also present in London. Aladár Gerevich had won medals for Hungary before the War in both 1932 and 1936, and comfortably won gold in London with an undefeated record. Gerevich went on to win seven gold medals up to 1960, when he competed in his last Olympics in Rome at the age of 50.

Another serial winner just starting out was Denmark's Paul Elvström. His gold in yachting's 'Finn' class at the age of 18 was to be the first of four consecutive Olympic titles.

It was a very muted games for the home team, their ranks depleted by stringent post-war conditions. The British team netted just three gold medals, although they did claim 14 silvers. All the British successes were on the water: in the rowing at Henley, Burnall and Bushell were victorious in the double sculls; Wilson and Laurie (who had served together in Sudan for the previous ten years) won the coxless pairs. On the sea, Stewart Morris and David Bond were the winners in the London to Torbay 'swallow' class yachting - the only time this class has appeared at the Games.

The hero of Wembley stadium was unanimously the Belgian marathon runner, Etienne Gailly. Gailly had never run a marathon before, but traded the lead with more established names throughout the first 26 miles. He entered the stadium first, shortly ahead of Argentina's Delfo Cabrera and Britain's Thomas Richards. Gailly had barely a lap of the track to complete, but the crowd could see his legs wobbling and his path wavering to and fro. Groans rang out around the stadium as he dried up to a walk and was overtaken by Cabrera and Richards. In a shocking reminiscence of Pietro Dorado collapsing within view of the tape 40 years earlier (the last time the Games had been held in London), Gailly fell to his knees on the home straight. But, to a standing ovation, he straightened up and staggered over the finishing line for a bronze.

Inevitably, the War was to produce its own heroes. Many of those competing in London were veterans, and a few were even carrying injuries sustained in combat. None was more remarkable than Hungarian pistol-shooter Károly Takács. Originally right-handed, his shooting hand was shattered and left unusable by a grenade while he was in service. Takács nevertheless brought himself quickly up to Olympic standard, shooting with his left hand, and he achieved a much-acclaimed gold in London. This feat is all the more remarkable when one considers that it often takes over 20 years for a shooter to reach Olympic standard with their leading hand.

The Olympic boxing had seen bad temper and controversy, not least from a belligerent and self-important American team, but was home to another remarkable victory through injury. Július Torma shattered his knuckles not - like Takács - in combat, but on the jaw of an unlucky opponent in the second round. Nevertheless, he spared his left hand through his last four matches and won the Welterweight title literally single-handedly.

The Old and the Young; The Tall and the Short; The Rich and the Poor

31 years separated Bob Mathias and Terence 'Tebbs' Lloyd-Johnson, a gap larger than the age of many other participants. American schoolboy Mathias had only taken up the decathlon three months before and possessed the naivety you might expect of a 17-year-old. He nearly earned himself disqualifications in the shot and high jump, before going on to complete the second day in semi-darkness. His discus throw was longer than anyone expected and the officials lost the marker for his longest throw. Car headlamps had to be used to highlight the foul line for his javelin throw, since conditions were so bad. But Mathias bettered the weather, darkness and red tape to become the youngest-ever winner of a track and field gold medal. It is even more remarkable that he did so in one of the most physically demanding events. When asked how he would celebrate, he self-deprecatingly shrugged and replied 'I'll start shaving, I guess'. He was back to successfully defend his title in 1952.

By contrast, Lloyd-Johnson was a 48-year-old veteran. His bronze medal in the punishing 50,000m walk made him by far the oldest medallist of all time at track and field. He had also competed in the 1936 Olympics, taking over the British mantle in this long and exhausting discipline from Thomas Green.

Very much fulfilling the 'short' category was Bantamweight weightlifter Joe di Pietro of the USA. Boasting an abnormally small frame of well under five feet, with arms that were barely long enough to lift the weights over his head, di Pietro set lasting Olympic and World Records for his weight category, being contested for the very first time.

No Olympics would be without its moments of light-hearted heroics. In London, these were mostly provided on the basketball court. The Iraqi team provoked much amusement with its rank incompetence (they lost two matches by over 100 points), but the highlight for many was watching a diminutive Chinese point guard dribbling the ball right through the legs of the mammoth US centre, Bob Kurland. China and Iraq went on to finish 18th and 19th respectively.

Less amusing were the ridiculously antiquated equestrian rules. The dressage events were reduced to farce when it was pointed out that one of the Swedish riders, Gehnäll Persson, was riding in a sergeant's cap. As only commissioned military officers2 were permitted to compete, the Swedish team was disqualified and robbed of the gold medals which should have been rightfully theirs. The incident clearly made a nonsense of the socially elitist world of equestrianism, and the laws were changed soon afterwards.

Equestrianism, though, was just one of many sports to be dragged into the modern era by the London Olympics. Although the Games were hastily organised and often substandardly run, they played an essential part in rekindling the spirit of competition and the likes of Blankers-Koen, of Zatopek and of Mathias played a vital part in promoting and inspiring sporting excellence into the second half of the 20th Century.

1Blankers-Koen won the 200m on its first Olympic appearance, by a margin of over seven metres and by nearly a second, a distance unmatched ever since.2ie, those of ranks of lieutenant and above.