Dorando's Marathon Content from the guide to life, the universe and everything 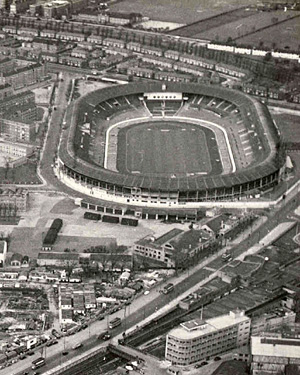 The fourth Olympic Games of the modern era were held in London, at a venue in Shepherd's Bush. The original and rather more classical location of Rome was frustrated by the 1906 eruption of Vesuvius. The Games that ensued in its place were arguably the strangest ever seen. The competition was acrimonious, the weather was dreadful, and the marathon created an unlikely hero in shape of an Italian cook called Dorando Pietri.

In 1908, anything seemed possible. This was an age of triumphant modernity and self-confidence, and many a nation came to London flushed with pride. The pride came before a fall. The generation that was called to competition would be mustered for a second time, and several of its champions were destined to perish amid the ruin of Flanders.

The British built a brand new venue to host the event, the White City Stadium, with seats for nearly 70,000. The tone was set right from the rain-swept opening ceremony, when the United States team noticed that the Stars and Stripes was missing from the complement of national flags flown from the grandstand roof.

The team's flag-bearer was Martin Sheridan, the reigning discus champion, and his retort was a refusal to lower the standard as he marched past the Royal Box. Edward VII's comments are not recorded, but Sheridan declared that 'this flag dips for no earthly king'. The British press reacted with typical indignation. (Just as typically, the United States went on to institutionalise the slight by repeating it at subsequent Olympiads).

It was still raining two weeks later on 24 July, when the athletes lined up at Windsor for the marathon. The standard distance for this event was then a precise twenty-six miles, but high-handed officials felt compelled to restore the importance of the monarchy, and extended the course to ensure a finish right in front of His Majesty. They were later found to have added 365 yards to the regulation measure. As it turned out, the extra stretch was very significant.

For most of the race, a South African called Charles Hefferon set the pace and seemed likely to win. Hefferon was among the favourites, along with a native Canadian called Tom Longboat, winner of the Boston Marathon in the previous year, and the US champion, Johnny Hayes. In fact the latter was a favourite in the sense of proficiency only. In common with the rest of his countrymen, the unfortunate American had become an object of derision for the British public. The initial insult to the Crown had been compounded in the home crowd's eyes by a whole series of spats and tantrums as the Games progressed. New World brashness had repeatedly clashed with Old Country pomposity, and by now the members of the US team were fearful for their safety.

A mile from the finish, the flagging Hefferon was caught and passed by another athlete, who had himself broken clear of the following pack. This newcomer soon entered the stadium in first place, but nobody could tell who he was. He cut an improbable figure, diminutive, white-haired and moustachioed. None of this mattered to the crowd, all of whom seemed to recognise one important fact in unison: the man who was going to win wasn't the American.

The unknown athlete was an Italian pastry-cook called Dorando Pietri, and he was about to become famous. He was also exhausted and confused. The crowd's excitement turned to alarm as he tried to proceed the wrong way round the track.

Officials shepherded him back onto the right course. He staggered a few of the remaining 200 yards, and collapsed. A doctor helped him to his feet, but Pietri was reeling. He fell again, and was helped up again. The anxiety of the crowd was palpable as this painful cycle repeated itself. The little man sank to his knees for a fifth time only 20 yards short of the line, and at that moment a second athlete burst into the stadium. The crowd had no difficulty recognising this man; it was the despised Hayes. Pandemonium broke loose.

Dorando Pietri was more or less carried over the line by race officials. Hayes followed him home only seconds later, wearing an expression of shock and dismay. The Americans made sure that they had their entire team behind closed doors before lodging the inevitable protest. An hour later, the race was awarded to the United States athlete, Dorando Pietri was disqualified for receiving assistance, and fighting broke out in the stands.

The race left a number of intriguing legacies. A gold cup was awarded in the Italian's honour, and was presented by the Queen. It bore an engraved dedication to 'Signor Dorando', accidentally confusing the recipient's forename and surname. They had already been erroneously reversed in the race programme. The unintentional familiarity was appropriate, though, because Britain had taken Dorando to its heart.

In the months that followed, Pietri (now turned professional) raced against Hayes twice more, and beat him both times. Tom Longboat of Canada then challenged Pietri to a two-man race over marathon distance. The Italian accepted, with the cheeky proviso that this American-free race should still be run on American soil. The event was staged on a circular track at Madison Square Garden in the December of 1908. Pietri was well ahead with only four laps left to run out of two hundred and sixty-two - when he collapsed again and was beaten once more. Soon afterwards, Dorando Pietri decided to retire from competitive athletics.

There are several surviving newspaper reports of Dorando's Marathon. The most noteworthy copy was written by a reporter on the Daily Mail who was in the stands that day. This man was thoughtful enough to record the evident distress of Hayes as he completed what should have been the proudest race of his life. The journalist's name was Arthur Conan Doyle.

Irving Berlin wrote a popular song in Pietri's honour. A fashion for long-distance running sprang up. The popularity of the Olympic Games received a great boost, one that would sustain it despite the hiatus of the Great War. Nonetheless, the character of the Games was altered by these events in London. Baron de Coubertin's philanthropic celebration of mankind's athleticism would henceforth be replaced by partisan confrontation between fiercely-competitive nations.

And as far as we can tell, it all meant little to Dorando Pietri himself. He surely enjoyed his running, even if he came unstuck in his big races. Although he would live into the 1940s, his escape from obscurity was ultimately brief. The gaze of the public is fickle at the best of times, and these were hardly the best of times. Dorando was left alone to take pride in his little cup, and the eyes of the world turned instead to a more ominous contest.