The Healing Power of Curry Content from the guide to life, the universe and everything 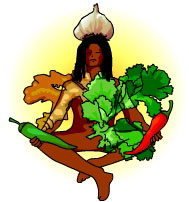 First, a definition of curry is in order. People are often confused about exactly what curry is. Most often the name 'curry' is given to any spicy dish or blend of spices that has an Indian or eastern flavour. This definition, however, includes too many spicy dishes that taste absolutely nothing like each other. A good rule of thumb is that a curry is a dish containing sautéed garlic, onions (unless religion or culture forbids their use) and varying amounts of most of the following spices: turmeric, cumin, coriander, ginger, chilli, cardamom, black pepper, cloves, fenugreek, and fennel. Curry dishes are not of Indian or Asian origin but are the invention of curry houses and other restaurants to describe the general flavour of this kind of cuisine (for example, chicken tikka masala is unheard of in India). In fact, the combination of spices in these dishes changes from country to country and even from house to house. Their origin, however, does not diminish their incredible medicinal value.

Believe it or not, each ingredient of the common curry has a medicinal use. In fact each ingredient has been used for thousands of years to treat a variety of ailments from stomach cramps to throat infections (although some believe curry has caused more stomach cramps than it has cured). Also, be warned, those of European origin whose stomachs are used to tamer cuisine may also experience the laxative side effect of curry. Here are the basic ingredients of curry and each ingredient's medicinal action:

The Egyptians made garlic beer to treat infections. Today we use it to lower cholesterol, as an antibiotic, to rid the body of excess mucus (the sulphur compounds in garlic break up mucus), and to stop platelets in blood from sticking together and creating blockages. Garlic has been used effectively against fungal, yeast, bacterial, and viral infections.

Onions have been used medicinally since the beginning of time. They can be consumed for their antibiotic properties (they are in the same plant family, Allium, as garlic and have most of the same medicinal actions). They can also be cooked and applied to the chest as a poultice for lung congestion.

Turmeric and several related species have been used in the Indian Ayurvedic medical system to strengthen and warm the whole body. Traditional uses include: digestive aid, analgesic (due to the action of turmeric's main constituent, curcumin), antiseptic, expectorant and anti-inflammatory. This medicinal spice has also been studied for its anti-cancer properties.

The stems of this plant flavour many Vietnamese dishes and the strong-tasting seed is used in curry and Cajun seasoning. The seeds aid digestion and also relieve flatulence, colic and diarrhoea. The whole plant acts as a tonic and mild stimulant.

The root, seed and leaf have all been added to curries. This herb was used in ancient Egypt as an aphrodisiac and as a wine flavouring by the Greeks. It has also been used to ease migraines and for gastro-intestinal complaints. The essential oil of this plant has been used for everything from flavouring toothpaste to medicine.

Ginger has an aromatic rhizome that is essential to almost any Asian dish. The shoots, leaves, and flowers are eaten raw in many dishes but the rhizome (root) is most commonly used. Ginger's strongest medicinal action is to suppress nausea. It has been proven through clinical trials to be more effective than anti-nausea medications. Ginger has also been used to treat indigestion and flatulence and to reduce fever. The essential oil of this plant is a great pain reliever when applied topically.

The hot constituent of cayenne is a substance called capsaicin. It has been used as a pain reliever for centuries as well as an aid to increase circulation. Cayenne is also surprisingly effective in the treatment of ulcers and even eye problems. Cayenne, when applied directly to a wound, will almost immediately stop bleeding. It is also suggested that the consumption of hot peppers stimulates the body to produce endorphins. Eating is supposed to be a pleasure, and this could certainly be a contributory factor to our enjoyment of a good curry.

Used in Indian garam masala, Arab baharat, Ethiopian berbere and of course in curry dishes, cardamom not only lends a sweet flavour to these dishes, it also has the ability to stimulate digestion, and is given for fatigue and fever. The essential oil from the ripe fruits of the plant is used in liqueurs and perfumes.

Stimulates gastric flow, acts as an anti-bacterial agent and helps relieve headaches and diarrhoea. Black pepper, when cooked, can actually be harmful in large amounts because it acts as an irritant to the gastro-intestinal system.

Cloves have been used to keep fats from turning rancid and to preserve foods. They are used to flavour everything from pumpkin pie to chewing gum. Medicinally, cloves main action is that of an anodyne (topical pain reliever).

This has been used to help relieve digestive cramps, menstrual pain and to reduce fevers. Fenugreek seeds have the unique ability to stimulate breast tissue to lactate (especially when used with blessed or milk thistle). It has also been used to increase breast size (look at the ingredients of most herbal breast enhancement products; it will almost always top the list).

Fennel is used to allay hunger pain, ease indigestion and as a diuretic. Fennel along with anise is the main flavour in liquorice (liquorice the herb has almost no flavour aside from that of sweet dust).

Looking at the ingredients and their medicinal action, it is easy to see a pattern emerging. These spicy foods have evolved over the ages to relieve common health complaints of the people in the area where they are eaten. This evolution was not conscious, but rather society choosing over a number of years ingredients that make them feel better and rejecting ingredients that have less desirable effects. Curry-like dishes contain elements that aid digestion and ease stomach problems - a common complaint in areas where sanitation issues cause disease. Some constituents of curry are antibiotic (also helpful in developing world countries as both a preservative and to kill harmful organisms), and spicy (hot foods tend to increase the body's thermostat, making you cooler). The same holds true for some Mexican, South American, and African foods that are very spicy and contain related ingredients with the same medicinal actions.

Although spontaneous healings from within curry houses are rare, as you can see, the ingredients are all quite active medicinally. As Hippocrates said:

If Hippocrates were alive today he would probably be a Field Researcher for the Guide, quietly making entries on his laptop from behind a very spicy curry somewhere in London.