A Gentle Introduction to the Art of Matchstick Modelling Content from the guide to life, the universe and everything 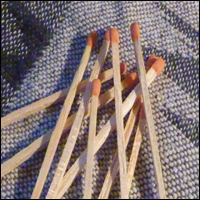 As the flood waters receded, Noah said unto the animals, 'Go forth and multiply.' So they went, all but the two snakes, who remained, coiled up, with mournful expressions. 'What's the matter with you two coils of misery?' Noah asked them. 'But we cannot multiply - we are adders,' said the snakes. So Noah put the snakes on a wooden trestle. The snakes were mystified. 'How does this help?' asked one of them. 'Ah,' said Noah, 'this is a log table.'
– Anonymous

People have been building stuff out of wood for donkeys' years.

It is written that around about four and half thousand years ago, Noah, begat by Lamech, and begetter himself of Shem, Ham and Japheth, was commanded to construct a timber vessel of quite literally biblical proportions1 for purposes of zoological conservation. Then some 1,500 years later, cunning Greek military strategist Odysseus was visited in a dream by the goddess Athena and subsequently constructed a horse-shapen wooden personnel carrier (capacity circa 40), consequently enabling him to break the siege of Troy. And a century after that, the Roman army in Palestine nailed a prominent local carpenter to a wooden cross, probably ignorant of the irony in so doing but patently without prescience to the reverberations that would follow to this day.

The point is that timber is durable, workable and versatile and it's got a proven track record as the construction material of choice for omnipotents and their acolytes when undertaking acts of derring-do. So if you harbour lofty aspirations to serve your chosen deity, a woodworking-related hobby may well be a suitable pastime for you. Happily though, having hands neither strong nor skilled at the plane and the lathe may not be the insurmountable barrier to works of heavenly merit they once were.

In the early 1970s toy importer Whyte Ridsdale & Co Ltd was enjoying storage facilities belonging to match manufacturer Bryant and May. Inspired by his landlord, Whyte Ridsdale sales director Len Wilson sought to invent a model kit using match splints, that is, the wooden part of a match minus the combustible business end.

Building models out of matchsticks is time consuming, which may explain why its popularity has traditionally surged among the prison population. 'You coming for a shower, Brickface?' can be easily and innocently rebuffed with 'Not right now Colin, I've just started reconstructing the Cutty Sark at 1:32 scale'.

But the entrepreneur in Len Wilson sought to revolutionise matchstick modelling by taking it out of the domain of the light-fingered lag and making the hobby accessible to the clumsiest cack-handed schoolboy. Before long, Wilson was dabbling with pre-cut cardboard templates onto which the match splints could be glued. And in 1972 his first three models - a Windmill, a Thatched Barn and a Norman Church - were released onto the toy market under the banner 'Matchbuilder2'. The range soon expanded to include a Tudor Cottage and a Country Inn.

'An absorbing hobby made easy,' states the faun oblong box in chocolate brown text with astonishing attention to punctuational detail. Meanwhile It's the 1970s!!! it screams implicitly. And sure enough the main ochre-framed picture on the top face reinforces these facts by showing three-eighths of a Brady Bunch fuscous3-coloured and acrylic rich, Mike supervising Jan and Greg, all three totally absorbed with matchbuilding. No naked flames near this family and their inflammable hobby if you please.

The basic principle of Matchbuilder is that you glue the supplied match splints to the flat-pack cardboard templates. For this you need not much more than a pot of glue (suggest a cheap PVA wood glue) and an appropriate cutting tool (for example, a proprietary safety cutter, or if you're a bit daring, a Stanley knife) to cut the match splints to the required length4. Then glue the matchsticks to the cardboard, one by one. In essence it is like making an episode of Wallace and Gromit: iterate by just a tiny amount. And then just a tiny amount more. Once you've covered all your architectural elements with match splints, fold along the scored fold lines and fasten (glue again) the elements together to create a three-dimensional wooden masterpiece. Of course, architectural detail such as the window frames, guttering and lintels are entirely to the modeller's fancy. As in fact is the finish. Varnish, stain... it's up to you.

Matchbuilder has moved on a bit since the 1970s - and has been joined by a selection of other brands including Matchitecture and Matchcraft - with a number of vehicles, including a 1920s omnibus, a traction engine and a tram adding variety to the market. So you could find yourself building a matchstick hay wain.

1Genesis chapter 6 verse 15: And this is the fashion which thou shalt make it of: The length of the ark shall be three hundred cubits, the breadth of it fifty cubits, and the height of it thirty cubits.2Patent applied for.3Brown or greyish black.4Probably wise to use a cutting board too, or you'll damage the furniture.