Chinchillas Content from the guide to life, the universe and everything 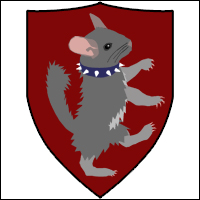 Chinchillas are nocturnal mammals of the rodent family. A male is referred to as a buck, a female as a doe and young are called kittens.

Chinchillas originate from high up in the Andes Mountains of Bolivia, Peru, Chile and Argentina. They were originally discovered by the Spanish before being introduced to other countries.

Their soft luxurious fur became very popular and was sought after so much that it almost caused their extinction. The reason their fur was so sought after was its very fine and soft nature - many tens of individual hairs come from each hair follicle making for an extremely thick, yet soft coat.

Chinchillas are now protected by the Convention on International Trade of Endangered Species (CITES) Appendix I, and hunting the wild chinchilla or trading in the pelts of wild chinchillas is banned. If anyone has a chinchilla these days, it is more likely to be in a live form as a pet rather than in an item of clothing.

Adult chinchillas are the approximate size of a small domesticated rabbit - between 9-11 inches long not including the tail. An adult male chinchilla typically weighs between 0.8 and 1.1 lbs. Females tend to be larger weighing in at up to 1.3 lbs. They have large, thin ears shaped like those of a mouse, and long whiskers. Their general body shape is similar to that of a rabbit and they have long back feet like a rabbit - their front legs are shorter and their paws can be used as 'hands', their long furry tail is similar to a squirrel's tail.

On a standard chinchilla the body fur, which is beautifully soft and thick, is grey, but they are available in a variety of colours including black, beige, blue-grey, brown and white. Most of these additional colours are as a result of selective breeding of captive chinchillas.

The animal is named after the Chincha Indians, who used the animals as a source of both food and clothing. 'Chinchilla' literally means 'little Chincha', the name being given to the animal by the Spanish explorers who discovered them in the 1500s.

History of the Chinchilla

Recorded chinchilla history begins in 1524 when the Spanish travelled to South America. It was here the Spanish encountered the Chincha natives who wore clothing made from the pelts of chinchillas, and used them as food. These original Spanish explorers took chinchilla pelts back to Europe and effectively began the trade in Chinchilla fur. The fur trade was so successful that by 1910 the Chinchilla was almost extinct in the wild. Luckily (for the wild chinchillas) hunting was soon banned, and before long chinchilla farming replaced hunting as the source for fur.

MF Chapman is responsible for the domestication of the chinchilla. He worked as a mining engineer in Chile. In 1923, after finally getting permission from the Chilean Government, he transported 11 chinchillas to California. They bred successfully and were originally sold to fur ranches and then later sold as pets. It is more than likely that most if not all chinchillas found as pets today are descended from Chapman's original 11 chinchillas1.

In the wild chinchillas eat a diet consisting largely of vegetation including grasses, seeds and roots. However, they will take advantage of their environment and opportunities, so may also eat insects and eggs should they happen across them.

The leaves of one particular plant, the Puya, are eaten by chinchillas all year round in the wild, often being their main food source in some areas. Additionally Puya berteroniana, due to its high water content is believed to form an important source of dietary water when environmental conditions are otherwise arid. Chinchillas making nests in the plant has also been recorded in the wild.

In the wild life expectancy is eight to ten years (less if they're turned into a coat for a supermodel), but in captivity this can be as much as 20 years.

Chinchillas tend to be most active at dawn and dusk, and during the night. However, they have occasionally been observed outside of their holes on sunny days. They are believed to live in colonies varying in size from a few individuals to more than a hundred.

Both males and females reach sexual maturity at around the age of 8 months, although this can occur as early as 5.5 months. After a gestation period of 3 to 4 months females give birth to 1-6 young (average of 2 or 3). Females usually produce two litters annually. Newborn chinchillas are fully furred and have their eyes open. The young are weaned at around 6-8 weeks.

Just like with homo sapiens the female chinchilla is the dominant sex, being very aggressive to other females. However, serious fighting in the wild is rare. Chinchillas may express threats by growling, chattering their teeth and urinating.

Despite this female centric aggression, chinchillas are social animals and have been observed to live in colonies of more than 100 individuals in the wild. Domesticated chinchillas usually demonstrate a similar social nature, and can usually be hand tamed to play and interact with their owner.

Chinchillas are large rodents, there are three species

As an example, Chinchilla lanigera is classified as follows:

Formerly abundant in the Andes, the species is today known only from a handful of individuals captured in 2001 in northern Chile.

The population of wild short tailed chinchillas is unknown but estimated to be dwindling; it was classified as 'Critically Endangered' on the 2006 IUCN Red List of Threatened Species.

Chinchilla brevicaudata is short tailed, with coarser hair, a flatter nose and is generally more stocky in comparison to the other species. It lives at the highest altitude of any of the three species - 15000 ft or more.

It is generally accepted that chinchillas in captivity are of the species Chinchilla lanigera - as they adapted better to captivity2.

Chinchilla lanigera is smaller than Chinchilla brevicaudata , its tail is longer and its ears have a more ‘rounded’ appearance. Domestic animals tend to be larger than wild, and exhibit a greater difference in size between male and females (sexually dimorphic).

Chinchilla costina (sometimes called the coastal chinchilla) is the smallest of all chinchillas. Their fur is short and not as compact as the others. Their ears are longer and they look more 'rat-like' than the other breeds. Chinchilla costina is found in the lower regions of the mountain range approximately 3,000 feet above sea level.

There seems to be some confusion as regards the exact number of chinchilla species. Some sources state a fourth chinchilla species - the 'North American Chinchilla'. The result of crosses and mating of the three other species listed above to create the domesticated, or pet chinchilla.

Though there is some suggestion that all captive Chinchillas originated from the single species (chinchilla lanigera) brought back by MF Chapman, it seems that the variation in colour, size and body shape found in modern captive Chinchillas is probably best explained by these having been a combination of multiple chinchilla species being bred together in captivity over a number of years.

1This is almost certainly apocryphal, but a widely touted spurious claim.2Though there seems some debate as to whether captive chinchillas represent a distinct breed as a consequence of the three species listed here interbreeding in captivity.