Akko, Israel Content from the guide to life, the universe and everything 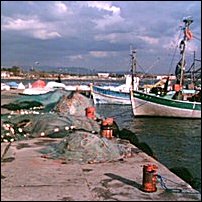 Akko1 is one of the northernmost cities on Israel's Mediterranean coast. The city projects out into the sea, and is surrounded by water on three sides.

There are two possible sources for the name of the city. According to Jewish lore, there was a flood during the generation of Enosh, a biblical character. As the waters of the flood rose towards modern Akko, God said 'Ahd koh!', which means 'until here' in Hebrew. Over the years, the name got shortened to 'Ahko', or Akko. Greek legend, on the other hand, claims that Hercules was once seriously injured. He found the herbs necessary for recovery in the area of Akko. Accordingly, the name of the city would then be derived from the Greek word 'Aka', which means 'healing'.

Akko is one of the oldest continuously-inhabited cities in the world. It is first mentioned in written records in 3500BC, when it shows up in Egyptian hieroglyphs. Later on, the Kambizes2 used its port as their base in their campaign to conquer Egypt in 525BC, suggesting that Akko already had a sophisticated and well-developed port.

According to Jewish scholars, it is debatable whether or not Akko is part of the Land of Israel that is said to have been allotted to the Jewish nation by God. The Old Testament suggests that it was not part of Israel during the reign of Joshua, the period of the Judges or the reign of King Saul. King David is said to have been the first to annex it, and for a while it had the distinction of being the northernmost city in the land of Israel.

After Alexander the Great took over the Middle East, he set up a mint for coins in Akko. The city was then taken by the Syrian-Hellenists, which precipitated the Maccabee rebellion3. Most of the Maccabee battles are believed to have taken place in and around Akko. Yonatan, one of the Maccabee brothers, was killed in a battle in Akko. When the Romans conquered the area, Julius Caesar paid it a visit, and for years after all the city's documents were dated from his stay there. During the Middle Ages, it was famous enough that Marco Polo made it a stop on his journey to the East.

The Middle Ages brought many wars to Akko. Crusaders, Mamelukes, Syrian Muslims and Chinese Mongols all fought over the strategically located city. Later, Napoleon attacked the city, hoping to use it as his base for capturing the entire Middle East. The governor of Akko, Ahmed Al-Jazzar ('The Butcher'), successfully rebuffed the attack with the help of some British forces and aided in the end of Napoleon's attempt to rule the world. As Napoleon retreated for home, he is quoted as having said, 'Had Akko been mine, the world would have been mine'.

When the British began their rule over Palestine, they captured Akko and used one of the old Crusader fortresses as a prison for captured members of the Irgun-Jewish underground. Today, Akko is a picturesque fishing port, and home to Israel's steel industry. The old city contains many buildings which date back to the Crusader era and before. It also has two oriental markets, several museums and a handful of restaurants. The city inhabitants are a peaceful blend of Arabs and Jews who co-exist in harmony.

The Old City and the New

Pretty much everything that a tourist would be interested in seeing is contained within the walls of the old city of Akko. The rest of Akko is basically an industrial town with neat streets and not much else to see.

A visit to Akko would not be complete without a walk on its walls. Akko is one of the few cities in the world whose walls have remained standing over the centuries, despite being attacked by many large and powerful armies. The modern-day walls, which are built vaguely in the shape of a pentagon, with moats, counter walls, towers, and guns as secondary defence, were built in stages between 1750 and 1814. But the walls of Akko, having never been completely destroyed, have a history that goes back almost a millennium.

The old city of Akko was fortified for the first time in the days of Ibn Tolon, a ruler during the time of the Ptolemy rule over modern-day Israel. The wall was fixed and improved in 1071 in preparation for the invasion of the Seljuk Turks and again in 1099 in anticipation of the Crusaders. In the 1200s, the Crusaders built the wall up higher, added some new ones and constructed towers. Their renovations were clearly insufficient, because in 1291 the Mamelukes razed most of the wall when they captured the city. Akko retained the damaged walls until 1750, when Dahar El-Omar, a Bedouin ruler, built them back up. Between 1800 and 1814, the current walls were completed by Al-Jazzar. They are unbelievably thick, with watchtowers and counter walls, and are protected by guns. Napoleon's forces were defeated at the eastern wall, known as 'Napoleon's Wall', when the defending forces allowed his army to scale the outer wall and trap themselves in the moat, where they were easily shot down. The wall is still completely intact, with even the guns in their original positions.

The Akko fortress is the largest building in the old city. It comprises the most complete remains of a Crusader fortress in Israel. It was built by the Hospitaller Order of Knights4 in the early 1200s, and an Ottoman fortress was built on top in the late 1700s.

The fortress is built very vaguely in the shape of four wings around an open courtyard. The north wing was built along the northern wall of the city. It basically consists of nine long and narrow halls, which served as storerooms and water reservoirs where rainwater was stored.

The eastern wing contains a roomy hall with a vaulted ceiling and huge square columns, which is presumed to have served as a ceremonial hall for the Hospitaller Knights. This was also the hall where the British kept the members of the resistance that they had captured, pending death by hanging. You can still see the hole in the roof where the prisoners planned to escape. They didn't end up using that way out, because free resistance members engineered a better escape plan, which was so effective that it still holds the record for largest prison break in Israel.

The south wing contains a large dining hall and an adjacent kitchen.

The western wing contains two floors of sleeping accommodation. In the northern section of the hall are public bathrooms, each floor containing approximately 30 toilet stalls. The toilets drain into pipes set into the walls, which lead into an underground cistern, which drain into the city sewers.

Towards the end of the 12th Century, the Templar Knights built themselves a fortress in the southwestern quarter of the city. It was considered the strongest fortress in Akko, and was protected by several towers. The fortress was later dismantled by Dahar Al-Omar so that its stones could be used in the city walls and it is now underwater. The only part of the fortress that can be visited today is the Templars' Tunnel, which leads from the fortress eastward to the sea. It was discovered underwater in 1994, and since then a system of pumps was installed to keep the water level below the wooden walkway.

Dahar Al-Omar built Akko into a center of commerce and trade. He realised that, in order to accommodate the traffic passing through the city, he would need several large and efficient inns. There are four old khans, or inns, in Akko that date back to Al-Omar or earlier. Khan Al-Omdan, Khan el Faranj, Khan Al-Shuna, which is the oldest inn in Akko, and Khan Al-Shawarda, which is probably built on the location of the Clarissa Nuns' convent. The individual khans are not very different from each other, but retain an authentic feeling which makes them definitely worth visiting.

Moshe Haim Luzzato, a famed Jewish author, mystic, and rabbi, lived in Akko for a short time during his travels. At the bottom of the Arab market, you will find the synagogue that he designed and prayed in during his stay in the city. Its unusual design and everything there is to know about the rabbi are explained by an in-house guide. If the guide is not in the synagogue when you arrive, then just dial the number on the door and he'll be down in a few minutes.

Wherever you go, make sure you don't miss Akko port. A small wharf sheltered by a breakwater, the port is used mostly by fishermen. The small outboard motor boats, together with the heaped-up nets, beautiful ocean view and wheeling seagulls make the port a picturesque and delightful little place.

The Hamam al Basha, or Turkish bath, was built by Al-Jazar in 1795 and kept working until the mid-20th Century, when it was finally shut down. Today it appears exactly how Al-Jazar had it designed, but also includes a video presentation that explains how the baths used to operate and all the functions that they performed for the people of the city.

The old city has several places to eat, ranging from small falafel stands off main streets to sit-down restaurants overlooking the crashing surf. If none of these satisfy, then the modern city of Akko has several eateries along the main street, within walking distance of the old city.

If you are coming by an Egged bus from any major city in Israel, then you will very probably have to travel to Haifa and switch buses there. Haifa has more than one central bus station, so this can get complicated and confusing, especially since buses to Akko are not that frequent.

Another possibility is to take the railroad. Railroads in Israel are quite pleasant and clean. Part of the line to Akko passes industrial warehouses, but quite a bit is also along the beach, affording a beautiful view for some of the ride. Currently, the Israrail line runs from Jerusalem through Tel Aviv up to Haifa and then Akko, stopping at all major cities along the way. If you are coming from any coastal city or Jerusalem, then the railroad is a viable possibility.

1The name has also sometimes been transliterated as 'Acco'.2An early Persian civilisation.3The Maccabees were a band of brothers who fought against the assimilation forced upon the Israelites by the Hellenists. Their success is celebrated in the Jewish holiday of Hanukkah.4A group of Christian knights who were dedicated to caring for the sick pilgrims in the Holy Land.