Velvet Worms Content from the guide to life, the universe and everything 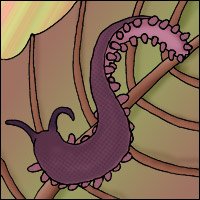 Velvet worms are some of the most unusual and interesting of creepy-crawlies - and among the least known and hardest to find. They also have one of the longest known pedigrees of any creatures on Earth. Despite the name, velvet worms are not particularly worm-like, and nor are they made of velvet. They are also known as peripatus, meaning 'ambler' or 'walker', from the Greek 'peripatein', to walk about.

There are around 200 species, so a single description is necessarily vague. Looking more like caterpillars than worms1, with stubby legs and segmented bodies2, they are shy and tend to prefer dark and damp places. They are typically 2cm-4cm long, although some species can measure up to 10cm. Colours vary widely, with white, blue-grey, orange, purple and brown being common and other colours known, and sometimes bear patterns such as diamonds. They have a thin layer of chitin (the stuff insect shells are made of), which gives the velvety effect to their skin and requires them to moult every 14 days or so.

They are carnivores, and perhaps their most remarkable feature is their method of hunting - they can squirt slime up to 30cm from their oral tubes to entangle their prey. This then hardens, entrapping the victim and allowing the velvet worm to inject toxic saliva into its still-living prey to start the digestion process. Since they have no teeth, the flesh needs to be at least semi-liquified before they can ingest it.

The most obvious difference between velvet worms and true worms is that velvet worms have legs, or, rather, stubby, conical feet: 13 - 43 pairs depending on species, with lower numbers being more common. The legs are hollow, and have no internal joints. Velvet worms walk using hydrostatic pressure - each pair of legs fills with fluid to extend, then retracts as the pressure drops, with the actual muscles giving only small assistance, though the animal can also bend and contract its entire body. Each foot has a tiny hooked claw of chitin, which gives velvet worms their scientific name, Onychophora ('Claw-Bearers'). They have two antennae and two eyes in the usual places, as well as two 'oral tubes' (modified legs used for squirting slime) near the mouth and two mandibles. Like insects, they do not use lungs to breathe. Instead, they have breathing holes called trachea scattered over their bodies. In velvet worms, these are simple holes that cannot be closed; this makes them more primitive than insects, whose breathing holes (called spiracles) can be closed to prevent loss of moisture. As a consequence, velvet worms are very prone to both dehydration and drowning, making them the only phylum to be totally non-aquatic, with no swimming members. They also have one of the longest family trees of any phylum, but more on that later.

Although they have tube-like hearts, their blood does not transport oxygen. Rather than having a circulatory system of arteries, veins, and other blood vessels3, they have a pseudocoel or haemocoel, a body cavity entirely filled with blood in which the internal organs are bathed. The heart keeps the blood circulating within this, a similar system to that found in insects. The heart runs the entire length of the body, with a pair of openings in each segment. The blood forms part of the immune system, and also deals with waste transport.

What's So Great About Them Then, Eh?

For something so unremarkable-looking, velvet worms do have a few interesting features. Onychophora are recognised as a phylum in modern taxonomy - in other words, a group of creatures as distinct as Chordates4, Echinoderms5, Sponges or Arthropods6. So they are a major branch of life, albeit a small one, with somewhere around 200 species7 and that alone makes them remarkable. They are more closely related to humans than earthworms (Annelids) are, but not as closely related to us as starfish (which are Echinoderms).

So the velvet worms form a long, prominent twig from near the base of the Tree of Life, but a thin one; they are divided into just two family groups, the Peripatidae and the Peripatopsidae.

Where Did They Come From?

Way, way back in the beginning of time, life existed only in a small rockslide in northern Canada.

Well, all right, that's not actually true, but it might nearly as well be for all the direct evidence left to us. The Burgess Shale - a patch of scree near Field8 in the Rockies - contains some of the oldest fossils on Earth, from a time before animals commonly had hard, easily preserved body-parts such as bones, teeth or shells. So strange are the creatures preserved within the Burgess Shale that it is often hard to connect them to any living creatures.

One of the strangest of these is Hallucigenia, a famously difficult-to-analyse fossil - it is now believed that the original interpretation of the fossils had it upside-down, 'walking' on the spines on its back, with its legs waving inexplicably in the air. Little is certain about this tiny creature but the most widely-accepted interpretation is that it has several features in common with modern velvet worms.

Whether or not Hallucigenia is closely related to modern velvet worms, its contemporary Aysheaia (and other members of the group lobopodia from the same fossil area) definitely are. Unlike any modern velvet worms, these appear to have been aquatic and of great diversity. The fossil record continues back another few hundred million years (to a period known as the Ediacaran) - but it becomes very difficult to firmly identify any modern phyla that far back.

To be so (comparatively) common in the fossil record, the onychophorans must have been a very successful group, and this is also reflected in the greater diversity of onychophoran fossils. As well as marine species, we know of armour-plated examples, and fossils such as Xenusia that bear spines, none of which are found in living velvet worms.

So we have a picture of velvet worms being very common during the Cambrian period, but extremely rare nowadays - they are a phylum on its last claw-bearing legs.

Habits and Habitats - Where Can I See One?

There is nowhere you can see velvet worms easily. If you are unfortunate enough to live in Europe, North America or most of Asia (or, for that matter, Antarctica), you will have to hope for luck at your local zoo - or the pet shop; velvet worms have been gaining popularity as exotic pets.

Peripatids are more tropical than their cousins, residing in such holiday destinations as Central America, the north of South America, some Caribbean islands, West Africa, the Indian Himalayas, Malaysia and parts of Indonesia. Peripatopsids are found in the southern regions - Australia, New Zealand, New Guinea, South Africa and Chile - that were formerly part of the ancient landmass called Gondwanaland. Australia is the spiritual home of velvet worms, with 74 described species (compared with three species from South America, nine from South Africa, and eight each from New Zealand and New Guinea).

Within those locations, onychophorans like cool, damp environments. They may be found under stones, in leaf litter or in mouldy logs. A few are known to hang out in caves.

Surprisingly, some species can actually be quite sociable. Groups of up to 15 individuals have been found under the domination of a matriarch. Of course, there is a limit to how sociable 'quite sociable' means - it seems that promotion is by non-lethal gladatorial-style combat.

In keeping with their ancient natures, velvet worms have some pretty primitive ideas about sex. Some species lay eggs, some have internal eggs that hatch before birth, and some have a placenta-like organ allowing live birth. Females tend to be larger than males, who deposit packets of sperm (called spermatophores) onto a female's body, usually not near the genitals. Velvet worms do not attend sex education lessons, and females may collect spermotophores from several males simultaneously. The female's skin dissolves at this spot -interestingly, it seems that it is the female's blood cells that control this, rather than anything in the spermatophore - and the sperm are internalised, making their way to the eggs via the female's internal fluids.

One species, Epiperipatus inthurni is thought to reproduce asexually, a process known as parthogenesis, and frankly, given the above details, who can blame it?

So, aside from where they are found, what do those extra three letters in Peripatopsidae mean in biological terms?

Peripatopsidea are more similar to the early velvet worms. They have fewer legs (13 - 25 pairs) and include egg-layers (ovipores) as well as species whose eggs hatch internally (ovovivipores) and species that give birth to live young without eggs being involved (vivipores).

Peripatidae are the velvet worm equivalents of a high-spec model, with more legs (22 - 43 pairs), including one pair behind the gonopore (genital opening). They are exclusively viviparous, and have developed a placenta.

It is clear that the Onychophores were once plentiful on our planet. They pre-date the dinosaurs by hundreds of millions of years, and show little major change in the last 300 million years. Recognisable marine ancestors can be traced back a further 200 million years, almost to the dawn of the fossil record. Yet they have joined the growing list of animals struggling to survive, with about 30% of species being classed as critically endangered by the International Union for Conservation of Nature. A major contributor to their downturn has been the destruction of their habitat. Ironically, fragmentation of habitat leads to increasing isolation of small groups and the evolution of separate species, so it is believed that although overall numbers of velvet worms are dropping, the number of species may be increasing. And yet, it may soon be too late to see this living relic of early life before it is no longer a living relic at all.

1They are also more closely realted to arthropods than annelids.2The segmentation is not outwardly apparent except by the arrangement of the legs.3The only blood vessels found in velvet worms are capillaries used to supply the muscles in the body wall and the antennae. 4Animals with a central nervous system - mammals, fish, reptiles, birds and amphibians, among others.5Starfish and their relatives.6Insects, spiders, scorpions and crustaceans.7They are not, however, the smallest known Phylum. The species Limnognathia maerski and Trichoplax adhaerens are each so unique that they are assigned their own phylum, though there is some evidence that the latter may actually be several different species.8A tiny town in British Columbia, Canada.