Ill-Fitting Bras - A Medical Perspective Content from the guide to life, the universe and everything 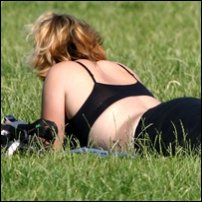 The ill-fitting bra is thought to affect at least 70% of women regardless of their size, though the one in four who require a D cup or above are worst off. Assuming that the measurements are right – definitely not a given – the array of different sizes, designs, shapes and brands available creates plenty of room for confusion. A bad fit can lead to a painful back, neck and shoulders, red marks and irritation over the shoulder and on the chest, and unsightly bulging out from the top or sides, to the extent that some women eventually seek a surgical reduction in size. Ill-fitting sports bras can be even more of a problem, considering that a lack of tight fit completely negates their purpose.

Despite the popular notion that bra size varies between brands, ranges and even between individual bras, there is in fact a great deal of consistency. The particular 'fit' of a bra does vary greatly, but this is not a major issue; in fact, incorrect measurement and poor choice of size are the culprits. This Entry looks at possible reasons for the ill-fitting bra, the issues surrounding surgery, and some steps that might be taken to improve the matter.

Unless she happens to know it to be a perfect fit, the modern woman would be brave not to try on a brassiere before buying it. However, some women do indeed buy bras that come in cardboard packets, and around 7% of bras in the UK are bought from a catalogue or on the Internet. In such cases, women are likely to settle for a near-fit rather than go through the whole process again in search of complete comfort. Most women who do visit the shops will avoid being fitted for a bra, either due to embarrassment, the personal nature of being fitted, or the feeling that they will be compelled to purchase a bra from that particular shop.

Even for those who are fitted, there are further societal pressures that can force them into choosing the wrong size. Thanks to the world of fashion, there is an assumption that comfort must be traded in for appearance. Women may intentionally opt for a tighter band so that they can wear a bra with a smaller 'footprint' or due to concerns that the band on an expensive bra will loosen over time. This is all hardly surprising if you consider that one in four women buy bras primarily as a form of indulgence1. Fashion has also dictated that actual bra sizes vary over time, and some women may as a result opt for a bra size that would once have been right for them, but no longer is.

The fitting process itself will not be covered in detail here – see How to Measure Your Bra Size and Buy a Bra that Fits for advice on the matter. However, it is worth looking at the ways in which the measurement process can contribute to a poor fit.

Two measurements are made when fitting a woman: the 'underband' and the 'overbust'. The underband is found by measuring around the chest below the breasts, while the overbust is the circumference over breasts where they protrude the most. The 'band size' is calculated by adding an arbitrary number2 to the underband, and the 'cup size' chosen according to the difference between the overbust and band size3.

Fitters often measure a woman while she wears one of her current bras, with the result that she may end up being told the size of the bra rather than her bust. A vicious cycle is easily produced this way, and yet fears of being sued for assault mean that many fitters use this method. Another method is for the woman to remove the bra and lift her bust into the required position and then be measured, the idea being that the bra will fit comfortably and hold the bust at the required level. Less commonly, the woman will remove her bra and measure the overbust with the breasts in their natural position. While this produces a measurement that is more easily reproduced by different fitters4, it tends to provide a more conservative cup size. Fitters vary according to which of the above methods they use, and while there is little room for error in women with a size A-C bust, there is much variation in measurement in women requiring a size D or above.

As if this weren't enough, measurement of the underband can vary according to how much air is in the lungs, with the result that the apparent band size increases and cup size decreases when a woman breathes in5. Furthermore, breast size can vary during the menstrual cycle, leading to both variations in measurement and the need for some women to own more than one size of bra. Also, it's worth remembering that, like feet, a woman's breasts won't be exactly the same size as each other. All these variations in measurement mean that women who are measured once and then avoid being fitted again may end up wearing ill-fitting bras for years.

Macromastia, the state of having disproportionally large breasts, is a recognised medical condition that is in some cases eventually treated using breast reduction surgery. Symptoms of pain due to an altered centre of gravity and excess strain on muscle groups of the back and neck are reduced through such treatment, and so the logical assumption is that symptoms are related to size above all else. But is this really the whole picture?

As long ago as 1984, a study suggested that the ill-fitting bra may produce muscle pain even in women with smaller breasts. Whereas a properly fitted bra provides most of its support through the band and cups, an ill-fitting bra can require the woman to tighten the straps to keep it in place. This is thought to put undue strain on the muscles that hold the shoulder blades in place, thus leading to back pain following use. Meanwhile, room for movement and lack of support can be responsible for pain in the breasts (mastodynia) regardless of their actual size.

Another possible problem reflects the tendency to opt for a tighter band. In women with macromastia and those who are overweight or obese, there is a tendency to compress excess flesh when fitting a bra, thus giving a smaller band size.This leads them to opt for a bra with a tighter band and an overly-large cup size6. As well as making these women think that their cup size is excessive, such a bra causes pain by restricting the movement of the back and spine, and may cause skin problems where the unsupported breast is pressed against the chest wall.

While ill-fitting bras may affect all women, those with macromastia are much more likely to end up with a bra that is badly fitted to the point that it causes serious symptoms. Around 10,000 women have breast reductions privately in the UK each year, and yet in some studies almost every woman referred for surgery has been found to be wearing the wrong size bra. While this is certainly not the only reason for their symptoms it may be a huge contributing factor – one study7 has even shown that women with small breasts are just as likely to suffer from bra-related pain. Breast reduction surgery is not without risks and is currently poorly funded, and so any alternatives that might reduce the need for surgery should be looked into.

For tips on living with large breasts, see Holding Up Large Breasts - Bras, Corsets, and Coconuts on a String.

One important suggestion regarding women with macromastia is that they ought to be measured by trained professionals working for the health service. Such a move would help those most in need, and might reduce the number of women who require reduction surgery.

For many women, bras have become an indispensable part of their lives, and though doing away with them might reduce the risk of breast cancer, it would hardly reduce the pain and discomfort women experience. Even Charlie Dimmock, who famously claimed that her gardening on Ground Force was more comfortable without one, had to concede that she would wear a bra when she ran the London Marathon.

The actual techniques used to fit women for bras have been questioned, which is unsurprising considering the current system's scope for variation and error. One possibility is a move to using the underband to calculate band size alone, and to use a measurement of the breasts themselves to determine cup size. If done with the woman bra-less and lying flat, a measurement across the breast at the level of the nipple provides a consistent and reproducible indication of the required cup size8. An A cup would be indicated by a measurement of seven inches, a B cup by eight inches and so forth.

Unfortunately, current variations in 'fit' between makes of bra mean that such a system would need to be accepted as the standard by manufacturers, and bra sizes adjusted accordingly. The other problem would be one of privacy – being measured while lying down bra-less is obviously more invasive – but this might be overcome by the use of trained health professionals in cases where women experience severe bra-related pain. Whatever the case, an improved method of bra fitting would certainly be accepted were it to guarantee comfortable bras for all women.