The Water Towers of New York City, USA Content from the guide to life, the universe and everything 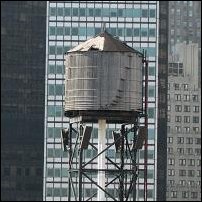 New York has a lot of famous landmarks such as the Statue of Liberty, the Empire State Building and the Rockefeller Center, but the humble, ubiquitous water tower should be the true symbol of New York. These workhorses of the water supply are found all over New York City, ensuring an adequate supply of drinking water to the city's population.

There is an extraordinarily large concentration of small water towers dotting the city's rooftops. Recent estimates suggest there are 10,000 water towers in the city, with over 100 built or replaced each year. Furthermore, there are only two large companies that build them, both of which have been competing since the 19th Century1.

Most water towers look the same. These squat barrel-like structures (often with conical roofs) are invariably made of wood and are about ten feet tall and wide. Wood is the preferred material because it resists temperature changes and corrosion rather well. Each tank is custom-built for the building it serves and is designed to hold an adequate capacity of water for the day. At night, more water is pumped into the tower to be used the next day. Some buildings hide their towers within enclosures, but most expose them for all the world to see; often on platforms above the roof surface. The rooftops of southern Manhattan are dotted with many visible examples of this form.

These water towers are needed because of the city's weak gravity-driven water supply. Water to New York City is provided through a 19th-Century system of aqueducts fed by various reservoirs. This system relies almost exclusively on gravity to deliver water2. Since it doesn't use many moving parts, this design has aged extremely well3, but the designers didn't envision there would be many tall buildings in New York. Unfortunately, any building over six storeys needs a water tower to ensure adequate water pressure to every floor. By placing the water supply for the building on the roof, buildings are able to use gravity to increase their water pressure.

Water towers have been appreciated as a whimsical aspect of the skyline for well over half a century now. There is just something funny about seeing a modern stone and glass edifice with a pokey little water tower on the roof. Water towers have been photographed and painted on numerous occasions. Cartoons have suggested water towers as a solution to the housing shortage. However, water towers are usually just incidental to the piece, looming in the background. Recently, however, artist Rachel Whitread made a water tower the main subject of her work. Last year, she installed a translucent resin cast of a water tower on a building in New York's SoHo. While it is the subject, the water tower still remains peripheral and ghostly, observed only by those people smart enough to look up every once in a while.

1Deborah Baldwin, 'The Humble Colossi of a Proud Cityscape', New York Times, 18 January, 2001.2According to the The New York City Department of Environmental Protection, '97% [of the water] reaches homes and businesses through gravity alone; only 3% must be pumped to its final destination'.3It was also de facto Y2K compliant.