Ronda, Andalucia, Spain Content from the guide to life, the universe and everything 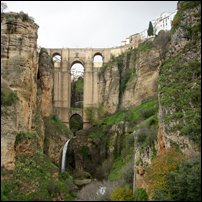 In the wild passes of these mountains the sight of walled towns and villages, built like eagles' nests among the cliffs and surrounded by Moorish battlements, or of ruined watch-towers perched on lofty peaks, carries the mind back to the chivalric days of Christian and Moslem warfare, and to the romantic struggle for the conquest of Granada.
— Tales of the Alhambra, by Irving Washington.

If you're staying in the Costa del Sol in the south of Spain, do yourself a favour. Catch the Sevilla bus from Fuengirola or Marbella into the hills. The road twists and turns and climbs sharply after Marbella, through pass after pass, until the deep blue Med exists only on the horizon. If you're sitting on the back of the bus, you need to hold both your nerve and your belly as it swings out over steep ravines. Eventually the bus will come out onto a high, rocky plateau, a land that seems wild and remote despite being just an hour from your hotel. The road is punctuated by little bar the odd truck-stop until, after an hour or so, the suburbs of a town come into view, spewing unpleasantly over a hillside. Half a bypass later, the bus will turn and swing in to town, and at first glance you might wonder what has brought you here. For a start, it's several degrees colder than it was on the coast and, although the town does not appear unpleasant, four-storey buildings obscure the view all around. This had better be worth it.

Let's walk down the hill into town and take a look around.

To start with, we'll follow Calle José María Castelló down until it becomes Calle Naranja and then Calvo Ascensio. Keep an eye out to the right as we go along; you might catch a glimpse of a round building that we'll come back to later. Turning right on a little plaza (Carmen Abela) we pass through the shopping centre before – rather suddenly – coming out onto the main square, Plaza de España.

Aha! At last! Somewhere we can get our bearings. To the right we can see the round building we saw earlier; it's the bullring. In front of us is a posh hotel, the Parador de Ronda, where a bowl of soup will cost us over ten euros if we have that kind of money to spare, and to our left is a bridge, connecting the new town (El Mercadillo) with the old on the other side.

The scale of the bridge is not immediately apparent until we cross the plaza and take a look at it from the railings beside the parador. Puente Nuevo ('New Bridge') straddles the El Tajo gorge, which is only only 30m or so wide, but drops away almost impossibly. Two huge supports hold the bridge above a 120m drop; peer carefully over the edge and you might just see the Rio Guadalevín far below. If you're feeling vertiginous, just walk a little further to the right for great views of the Serranía de Ronda mountains.

If you're particularly sharp-eyed, you might notice a walkway called Paseo Ernest Hemingway around the back of the parador. This is the town's only recognition of a terrifying massacre at the beginning of the Spanish Civil War, when 20 fascists were forced to 'run the gauntlet' from the parador (then the town hall). They were beaten over the cliff-face with sticks and agricultural flails; one terrifying tale among many in a ruthless war. Hemingway wrote about the incident in chapter 10 of For Whom The Bell Tolls:

I looked back over the square and at all the windows and all the balconies there were people crowded and there was the double line of men across the square to the doorway of the Ayuntamiento... He passed two men, four men, eight men, ten men and nothing happened and he was walking between that line of men, his head up, his fat face gray, his eyes looking ahead and then flickering from side to side and walking steadily. And nothing happened... Then I saw a man three men down from where I was standing and his face was working and he was biting his lips and his hands were white on his flail... the man raised his flail high so that it struck the man beside him and smashed a blow at Don Benito that hit him on the side of the head and Don Benito looked at him and the man struck again and shouted 'That for you, Cabron' and the blow hit Don Benito in the face and he raised his hands to his face and they beat him until he fell and the man who had struck him first called to others to help him and he pulled on the collar of Don Benito's shirt and others took hold of his arms and with his face in the dust of the plaza, they dragged him over the walk to the edge of the cliff and threw him over and into the river.

Hemingway was a regular visitor to the town, as were artists and writers including Alexandre Dumas and Orson Welles. Walking back into Plaza de España, the arrival of a couple of tour buses reminds you that they are not the only ones to have heard of Ronda's beauty.

You hurry across Puente Nuevo, passing clifftop cafes and restaurants starting to fill up with late-morning trade. Fortunately, you've brought a little light lunch, having researched the town on h2g2 before you set off.

You enter the old city, La Ciudad, and turn right into Calle Tenorio, which ends at a little square. From here, a good footpath leads down into the valley, and soon you begin to see picture-postcard views of the bridge; tiny figures move backwards and forwards on it. Meanwhile, half an hour's walk away, a cool breeze blows down the gorge over your quiet picnic spot in the valley. There are plenty of ruined houses down here, inhabited well into the 20th Century, whose old walls can provide shade from the midday sun.

Unfortunately, what goes down must come up again. Fortunately, the narrow streets of La Ciudad are cool and shady, and just up a slight rise is the beautiful Church of Santa Maria, which incorporates parts of the mosque it replaced and is a national monument. Ronda was a Muslim stronghold as recently as 1485, and many of the large mansions you see in the area were built on land given to the conquerors by King Fernando himself. It's worth wandering around the old town for an hour or two, soaking up the atmosphere and taking in the views from Ronda's other two bridges, Puente Arabe and Puente Viejo (Old Bridge).

The downside is that there aren't many places to stop for a drink in La Ciudad, and those that are tend to be the sort that charge tourists twice as much as they should, so after a while you'll probably want to head back over to El Mercadillo. A block from Plaza de España you'll find good food and drink at reasonable prices.

To finish your day, it's worth visiting the bullring for a look around. Ronda has been home to the Real Maestranza equestrian school since 1572; it was originally set up to teach aristocrats how to ride and fight by challenging bulls in an arena, and Ronda can justly claim to be home to the first bullring. It was here in the early 18th Century that Francisco Romero saved a fallen nobleman from being gored to death by leaping into the ring and waving his hat to distract the bull, and bullfighting was born. Ronda is still home to some of Spain's most famous bullfights and, being the largest, is also one of the most dangerous bullrings. Ronda's is well worth a visit to see the fascinating way in which the bulls are moved from the corrals to the ring, to watch the equestrian school and to wander around the small museum. You can even stride out onto the sand and reflect on the fact that somewhere between your toes is a bit of Orson Welles, whose ashes were scattered here in 1985.

By late afternoon, the tourists are returning home, and life begins to return to normal. So if you can, stick around for the night; Ronda has a number of good hotels and restaurants, there's a fairly lively bar scene in parts of El Mercadillo, and if you ask around you might even be lucky enough to catch some real flamenco.

There'll be plenty of time to take that bus trip back tomorrow.