How to Build a House from Coal Content from the guide to life, the universe and everything 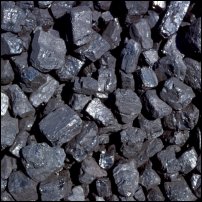 Okay, we're not suggesting you buy a sack of coal and start mortaring it into place. Coal in its usual form is not really a suitable building material, so in truth, this Entry should really be entitled how to build a house using by-products from the combustion of coal. Not the snappiest title in the world, you'll agree.

So what is coal?

Coal is a sedimentary rock, formed from the remains of organic matter in large, sub-tropical wooded swamps thought to be similar to mangrove swamps of today. Coal seams are usually found as part of coal measures, sequences of rock including the coal seam that represent many cycles of deposition through time. The typical sequence of seat earth, coal, mudstones and sandstones is often chopped and changed, where erosion and deposition cut through previous cycles. Two coal seams can occur in quick succession, or there can be thousands of metres of barren measures. Seams can range in thickness from very thin, only millimetres thick, right up to several metres.

The coal seams are surrounded and sometimes interleaved with fingers of the other rock in the coal measures. Fossil bands not only confirm the marine nature of the mudstones, but also help date the strata and correlate between different mines and localities.

Depending on the diagenesis (the pressure and low level heat from being buried over millions of years), coal can be in different qualities or grades ranging from brown coals or lignite (the most immature) through to the shiny, hard, black anthracite.

First used in around about 4000BC for basic domestic heating, coal has developed from the Industrial Revolution onwards, and has been utilised as one of the main fuels for generating electricity. The process has been tinkered with and evolved, but the basic principle is to burn the coal and use the heat generated to turn water into steam. Use that steam to turn turbines, attach the turbines to a generator, and generate electricity. Most current UK coal power stations (those built in the 1950s – 1970s) use PF (pulverised fuel) where the coal is ground into a fine powder, maximising the surface area of the fuel available for combustion as it is blown through the burners.

As mentioned above, the coal is not a pure fuel, there are various other things included within it. Although the mining process aims to remove as much of the non-coal (or gangue) material from it at source, there will always be some of the country rock (either from the edge of seams or from thin beds within the seams) pyrite, and other natural materials from the coal formation within the fuel. These other factors in general aren’t combustible, forming the ash and end up in the waste streams of the power station. From the boiler, there is furnace bottom ash (FBA), the cooled slag from the combustion that accumulates on the sides of the boiler, before falling into the bottom where it is removed. FBA has the appearance of a dark grey coarse gravel to a fine sand.

The hot gases from combustion that pass over the heater elements are exhausted via the ESP1 which consist of grids of fine wires that are negatively charged, attracting the particles of ash. These are released from the wires by periodic tapping by automated hammers. The PFA2 is then collected and sometimes separated into different size fractions. Roughly 10% of the PFA forms cenospheres, hollow beads of molten ash that due to their size and sphericity are useful as ultra-low density and heat-resistant inert fillers for industrial applications such as refractory tiles.

Depending on the station set-up, the gases can pass through other processes (either before or after the ESP) to remove some of the more environmentally damaging components. The legislation that regulates the emissions from the stacks is more restrictive since the implementation of the Clean Air Act and subsequent regulations, though not strictly enough for some campaigners. Carbon dioxide can (in theory) be removed either pre or post combustion before being sent to one of those nice Carbon Capture and Storage (CCS) facilities, but there are few if any commercial examples of this on the scale of a 500MW power plant unit. Selective Catalytic Reduction (SCR) removes the nitrogen oxides3 from the gas by reacting them with a catalyst. To remove the sulphur dioxide (SO2) the cause of acid rain, the most common process is FGD, or Flue Gas Desulphurisation. The flue gas is blown through a slurry of water and crushed limestone, the SO2 reacting with the limestone to form gypsum. Gypsum (hydrated calcium sulphate) is the material used for plasterboard, drywall, plaster of paris and as a soil fertillizer or conditioner. Gypsum from the FGD plants is sometimes referred to as desulphogypsum to differentitate between it and naturally occuring gypsum.

The PFA has some interesting properties: it is pozzolanic, meaning naturally cementitous. The word pozzolanic comes from the town of Pozzuoli near Vesuvius, where the Romans found volcanic ash that when mixed with lime gave hard wearing concrete that could set underwater (useful for constructing docks and piers). The durability of concrete made with ash was such that concrete buildings from the Roman period like the dome of the Pantheon survive intact to this day.

PFA is used to manufacture breeze blocks (cinder blocks) and as a fill for grouting works. Fill and grout jobs involve the stabilisation of underground voids (such as old mine workings) using cement to prevent collapse; the PFA is used as a filler instead of sand. An example of this would be the stabilisation of the Northwich Salt Mines or large areas of the Black Country. The recent construction of the link road to the East Midlands Parkway Station, Nottinghamshire, used PFA to raise the levels to that of the existing A453.

It is the two by-products, PFA/FBA and gypsum that help construction use less primary aggregate by replacing sand and gravel extraction; and reduce the amount of gypsum mined each year. All of the desulphogypsum produced in the UK by coal fired power stations is sold to the plaster manufacturers as the mineral produced by the FGD process is very pure chemically, reasonably cheap and readily available. All of the FBA is used4, but only some of PFA is used. The two main issues are the generation is at its maximum in the winter, just when the demand from construction is at its minimum; and that in the UK the ash currently has a rather grey status as to whether it is classed as a waste (with a lot of legal hoops to jump through even when it is being used) or a by-product (and therefore much more attractive to industry as a whole).

Some PFA each year is therefore sent to landfill. Some companies have their own facilities mostly in the form of above-ground mounds (since the introduction of the Pollution Prevention and Control PPC regulations, in turn superseded in 2007 by the Environmental Permitting Regulations), which does allow them to stockpile for the times of greater ash sales during the summer, or alternatively, they use external landfills that are permitted to accept the PFA.

So in a house with a breeze block inner shell, and plaster board on the internal walls - it could be said to be built (at least partially) from coal.

1Short for electrostatic precipitators in this case, not extra-sensory perception.2Pulverised Fuel Ash. Sometimes referred to as fly ash.3Collectively known as NOx – comprising nitric oxide, NO, and nitrogen dioxide NO2.4FBA is coarser than PFA, which the block makers prefer.