Tree-sitting Content from the guide to life, the universe and everything 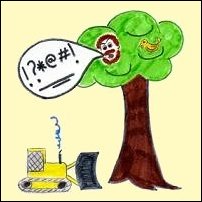 I understand to some people, I'm just a dirty, tree-hugging hippie, but I can't imagine being able to take a chainsaw to something like this.
- Julia 'Butterfly' Hill, who lived in a 600-year-old California Redwood (which she named Luna) for more than two years to save it

There's something grossly anachronistic about a human being inhabiting a tree. According to evolutionary theory, many of the earliest mammals lived in trees. Some have continued to live in the forests, while others have found their place on the ground. Human beings generally fit into the latter category. One exception are those humans who seek to protect trees from destruction by living in them. Though trees are not a natural habitat for human beings, those animals who ordinarily live in trees are not apt to protest about the destruction of their habitats themselves (squirrels being notably skittish around bulldozers and chainsaws).

As a rule, human beings like trees. Trees, after all, provide oxygen, beautiful scenery and the pulpwood used to make 'Save the Trees' signs. However, certain people value other things above trees. For instance, some people like to tear down trees in order to build things such as roads, houses, schools, cinemas and speciality fruit shops. They also like to use the material in trees to make things like paper for books and wood for furniture to fill up their new houses in freshly-cleared forests. Environmentalists sometimes choose to save a particular tree from becoming a piece of furniture by making it their home. The tree-killers don't dare to cut down these residential trees, knowing that a widely-distributed video of a robust yellow bulldozer attacking a rail-thin Vegan in a turtleneck could hurt business. They are forced to simply absorb the expense of delaying construction, as well as the purchase of bullhorns to shout nasty things at the protesters.

This act of rebelliously living in a tree is popularly called 'Tree-sitting', though the businessmen who are hurt by it may have another word for it ('trespassing'). It is a somewhat romanticised non-violent environmental protest1. Generally, tree-sitters live in groups. The more well-organised groups set up platforms and tarpaulins. Some can even create little villages with each inhabited tree accessible to the others by rope. They come well supplied with (vegetarian) food and other necessities. They communicate with each other using cellular phones or walkie talkies, and work together with accomplices on the ground to stay well-supplied.

People intent on removing tree-sitters will try a variety of techniques to remove the arboreal pests. Threats, negotiation and physical removal are not uncommon. When someone inevitably climbs up (or is lifted up by some mechanical device) to try to remove the protester and arrest them, well-prepared tree-sitters lock themselves to the tree using a variety of chains, ropes, locks and clasps. Aside from such moments of drama, tree-sitting is fairly boring. Some tree-sitters play music, or write self-congratulatory poetry. It can get uncomfortable and tedious. To alleviate this, some groups go into trees in shifts - perhaps for a week at a time. Stand-offs between environmentalists and business interests can go on for years before a resolution is reached. That amounts to quite a bit of soy and granola.

This Entry was drafted on recycled paper. No trees were harmed during the process of researching this Entry.

A627725We Save Trees
1And really, what isn't romantic about sleeping next to a poop-bucket?